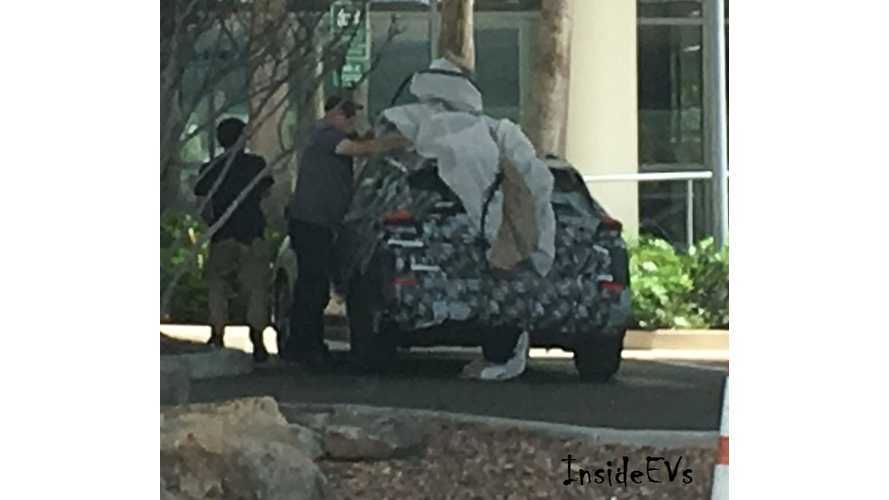 Oh, we know what is under there Nissan (via InsideEVs reader Darren T)

Nissan is trying its darndest to keep its new 2018 Nissan LEAFs under-wraps, while at the same time attempting to also slowly release small teaser images of its upcoming 2nd generation EV (see that gallery below), we here at InsideEVs just keep spotting it in the wild, and revealing it to the world.

This time however, it was actually InsideEVs' reader Darren T who keenly spotted the new LEAF testing in Orlando, Florida.

Thankfully Darren not only passed the shots along for us to share, but attempted to talk to a couple less-than-thrilled Nissan mule testers, and shared some of this thoughts after seeing the 2018 LEAF up close.

"I came across the car at a public charging station here in Orlando, Fl where my Volt was parked. I first noticed the car under a locked cover plugged into the CHAdeMO charger completely unattended.

After a few moments, I spotted 2 gentlemen approach the car, unlock the cover, unplug the car and quickly get in. I attempted to make conversation but it seems they were not interested which is understandable.

Based on the charging stats, I believe the car has a 50-60 kWh battery. As a side note, the gen2 car seems rather large compared to the gen1 car, I believe the wheelbase is about 10-12" longer. Let me know if you have any questions or concerns."

Our thanks go out to Darren for his sharp eye, and thinking quickly getting some fine shots!

Officially, the 2018 LEAF  is scheduled to make its debut (sans camo) on September 5th at a special event in Tokyo.  Production in the US starts in early December.

Gallery (below): More photos of the 2018 Nissan LEAF mule in Orlando, Florida (click to enlarge)

Gallery (below): Official Nissan teasers for the 2018 Nissan LEAF (click to enlarge)

Gallery (below): Some past shots we have managed to get of the Nissan LEAF - including one of the interior (click to enlarge)