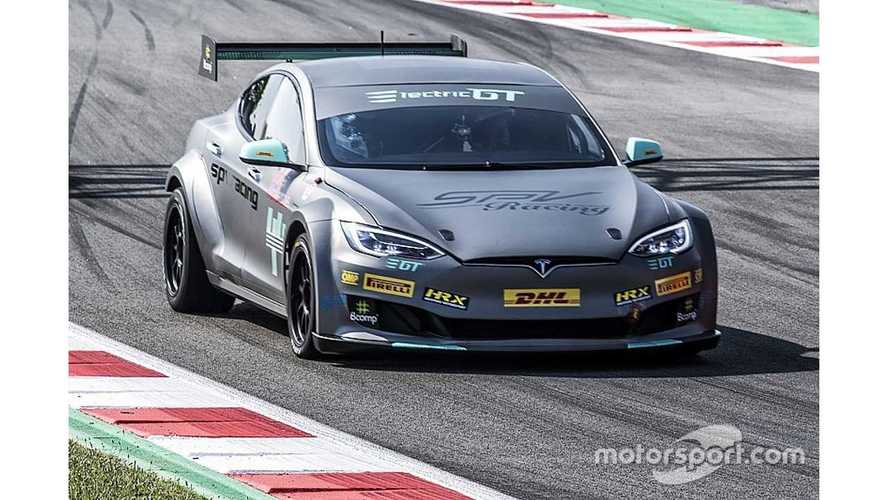 The vehicle did just 4.5 miles before Tif Needell had to pull to the pits due to overheating

Really, no matter how much the electric revolution is being touted by everyone in the car industry, there's always that friendly reminder that reels its ugly little head now and there, reminding us that the technology behind electric vehicles is still fairly new. A few days earlier, a Tesla Electric GT Championship race car - driven by Tif Needell - took on the Circuit de Barcelona-Catalunya. And it ended poorly. Certainly, the overheating issue experienced by the Electric GT Tesla is not an event of catastrophic proportions, but it still represents a reminder to keep our heads leveled about the whole thing.

The race-prepped Model S was able to make it only a lap and a half at full power before the whole thing got too hot. A lap at this racetrack is only 2.9 miles long, which in turn means that the car lasted only about 4.5 miles at full power before Needell had to pull over to the pits.

According to the driver, the vehicle experienced a power drop while driving at full power. While it wasn't a complete loss of power, it was significant enough that it necessitated a pit stop. Soon as the driver pulled off the track, a set of leaf blowers were brought to the vehicle to bring the temperature down.

Just 20 of these high-performance machines will debut this year in the Electric Production Car Series (EPCS) - the first all-electric, zero-emissions race series. In its inaugural season, drivers will compete in identical race-prepared Tesla Model S P100D, possibly giving us one of the most thrilling eco-friendly, bumper to bumper racing on some of the world's most renowned circuits.

The vehicle utilizes CFRP (Carbon Fiber Reinforced Plastic) parts to achieve a weight 1102 (500kg) less than the production car, all the while improving the car's downforce and its aerodynamic profile. The race car utilizes a front splitter and a rear wing, giving the Electric GT Holding’s EPCS race car has improved grip through the corners. Furthermore, the vehicle is equipped with double steel wishbone pushrod operated suspension, joined by a dual circuit, single pedal hydraulic race brakes that further improve cornering speeds.

According to a report by Jalopnik, the race series spokesperson said there was more to it than just routine overheating in this case. The spokesperson revealed that the vehicle was out on the hot track all day. It was being put through its paces at full race speeds before Tif Needell even got a chance to drive it. Later, the engineers revealed that there was a problem with the temperature sensors, producing a state where the battery was getting hotter than it was supposed to.

The spokesperson has also revealed that the vehicle will be able to run the race distance without issues. But, it will need to keep a more manageable pace throughout each race. This means that the race cars will have 570 horsepower at disposal - a level that they can keep throughout the race - with the full 778 horsepower available for situations like overtaking and starts. Furthermore, the spokesperson revealed that each driver will have “full control” over when they decide to use the car’s full power. In turn, this will likely become a “part of the strategy and part of the show" for the racing series.

Grab a quick look at Tif Needell behind the wheel of the Electric GT Tesla Model S right below.