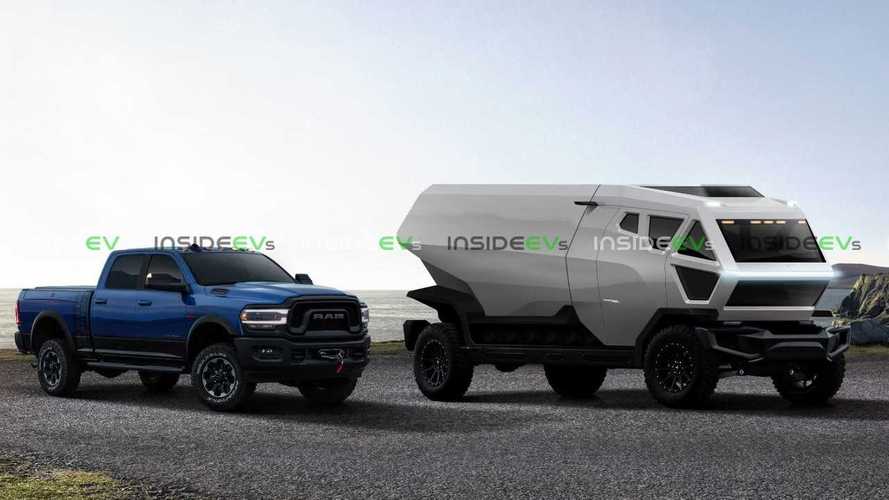 The Tesla truck is now the full-on center of attention as the reveal nears.

Electric pickup trucks are a super hot segment these days with the Tesla Truck, Rivian R1T, Atlis XT pickup, Ford F-150, Bollinger B1 and B2 and now even a Fisker pickup leading the charge. Let's check out some news highlights this past week in the world of electric trucks.

It was an exceptionally exciting week in the world of electric trucks. InsideEVs posted on a few new bold renders of the Tesla truck (including one dressed in all black), we covered the money-making potential of the Tesla truck, as well as highlighting some new Tesla truck reveal date details and even touched on Bollinger and its off-road electric machine.

Dressed in all black, this Tesla pickup truck render had a certain 'bad' appearance to it. It surely is bold and the black hue gives it a sinister look.

This render, basically the same as the one InsideEVs released a few days ago (link here), omits the Ram truck and reimagined the Mars-inspired Tesla truck not in a silver hue, but in a sinister-looking all-black package.

This latest Tesla truck render sure does make the Ram seem toy-like, as previously suggested by Elon Musk. In fact, it attempts to tie all of Musk's pickup truck suggestions and hints together into what's clearly an over-the-top electric truck.

There are still plenty of questions about the upcoming Tesla Pickup Truck — "Cybertruck" as CEO Elon Musk referred to it in the company's recent Q3 earnings call. While we can safely assume some details, Tesla has done a solid job of keeping almost everything under wraps.

But now we may have a reveal date:

So, What's Up With The New Hand-Made $125K Bollinger Electric Trucks?

It's abundantly clear that Bollinger Motors is not all about mass production or changing the world. Instead, the startup electric truck maker is planning to build its minimalistic, all-electric, off-road vehicles in small batches. Nonetheless, the company's B1 sport utility truck and B2 pickup truck are coming soon.

Blade Runner 'Tesla Cybertruck' Reveal Is Next Month In LA: Here's Why
++2