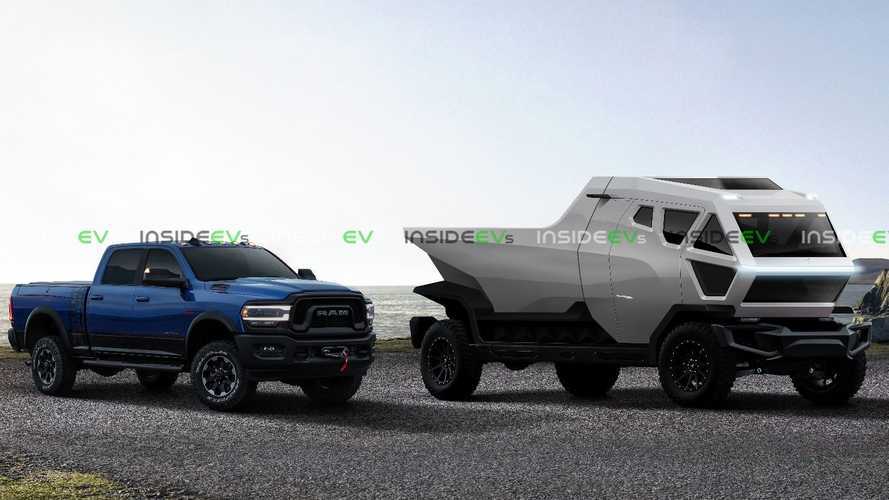 This is the vision of the Tesla truck as hinted at by Musk.

This latest Tesla truck render sure does make the Ram seem toy-like, as previously suggested by Elon Musk. In fact, it attempts to tie all of Musk's pickup truck suggestions and hints together into what's clearly an over-the-top electric truck.

Now, before diving in to take a look at all of the latest exclusive renders provided to InsideEVs, allow us to take a step back to explain how this is actually more or less the vision of the truck as presented and hinted at by Tesla CEO Elon Musk.

See The Tesla Truck In All Black Here

With recent remarks from Musk on the outward appearance of the upcoming Tesla truck, the vehicle that was seen in this April 29th tweet basically fits the description:

Musk stated that the truck looks more like a futuristic personnel carrier than any of the renders floating around the Internet. And that's precisely what we see right here (and in our new renders, too):

Note how the lights match the only teaser image of the truck ever released. This teaser comes straight from Elon Musk.

So, if we combine the teaser and the mentions by Musk that the Tesla truck resembles some sort of futuristic armored personnel carrier, as well as the various bulleted points (see below) highlighted by Musk in the past, then we arrive precisely here with our newest renders.

Our new Tesla truck renders expand on the Heavy Expanded Mobility Tactical Truck (HEMTT) cues in the Mars image tweeted out by Musk and connect the dots to the armored personnel carrier statement made by Musk too.

The wheels and tires, on this Mars truck, as well as its massive scale, were just too over the top though, so we toned both of those elements down a bit in our renders.

Let us know in comments if you approve or disapprove of the mega Tesla truck appearance. Additionally, provide us with some thoughts on what you think the Tesla truck will look like and we'll return to the digital drawing board for an additional take on rendering the Tesla truck.