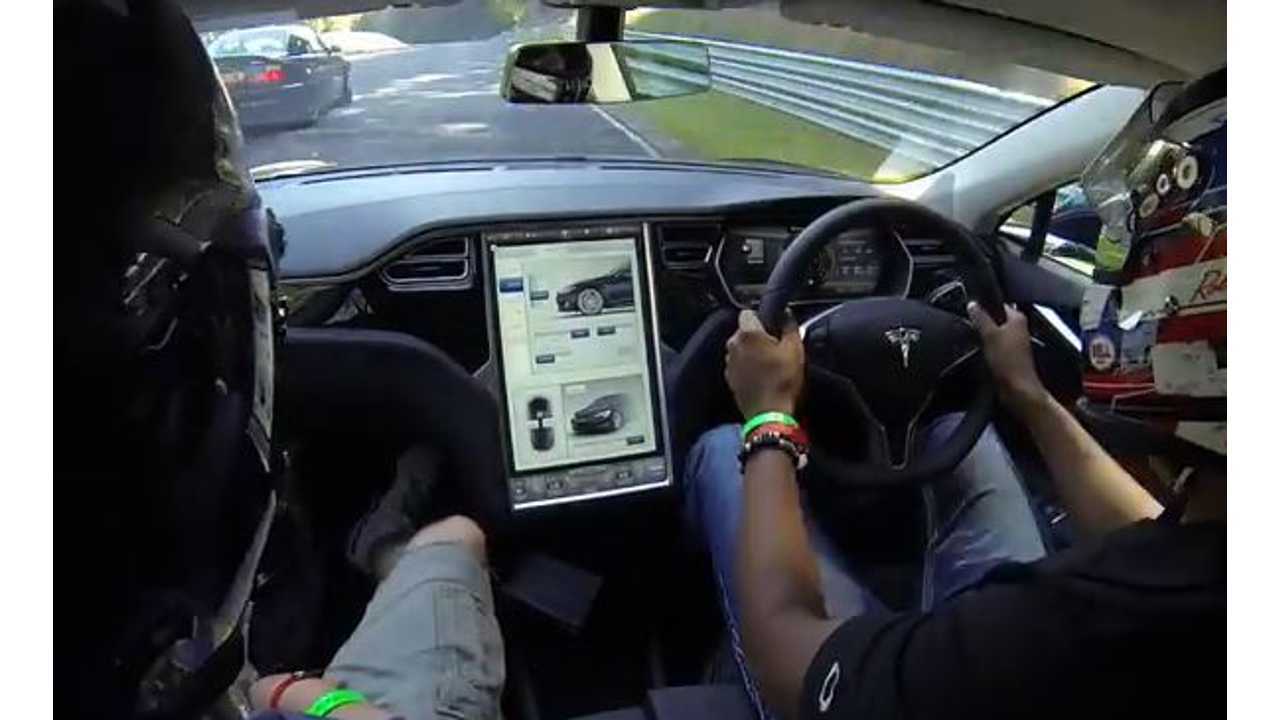 When pushed to the limits, the Tesla Model S often ratchets down its power output in an effort to keep components from reaching critical temperatures.

Therefore, it's no surprise that the Model S couldn't complete a full lap of the 14-mile Nurburgring under full power when driven at the limit by Robb Holland.

As Holland explains in a post he authored on Jalopnik:

"Last week at Darren Langenfeld's awesome Destination Nürburgring track day, I got cornered approached by noted Nissan GT-R tuner Iain Litchfield who said he had a car he wanted me to take around the Nordschleife. I had visions of 750+ hp supercars dancing through my head when he stopped in front of a bone stock Tesla Model S"

"Um, excuse me? I thought. You want me to take this 4,700 pound electric car around the Green Hell while 911 GT3 RSs and La Ferraris dive bomb me into Flugplatz? WTF??"

Of course, Holland immediately grabbed his helmet and hopped in the Model S.

For Holland, this was his first time driving a pure electric vehicle at the Ring and he was mostly impressed:

"Yes, it was heavy. Yes, it had almost no mechanical grip. And yes, the steering was as numb as my jaw after a trip to the dentist. However, considering that the Model S is a brand new car, from a car company that didn't exist 10 years ago, using technology that had (at the time of founding of the company) never been successfully mass produced on any large scale, I am suitably impressed."

"So what was the lap like from the drivers seat? Um... quiet? Really quiet, actually."

As for the actual lap and the reduced-power, Holland explains:

"The lap itself was around 10 minutes Bridge to Gantry (in heavy traffic) but unfortunately the car went into a reduced power mode about 3 minutes in due to excess battery heat (at least, that's my guess)."

"However, before it did it was able to keep a GT3 RS going full chat, within shouting distance (at the 2:00 mark) far longer than any 4,700lb sedan has a right to."

"I think without the reduced power output and traffic, a B-T-G lap under nine minutes is possible. According to the Bridge To Gantry site, that would put it in the company of some really quick hot hatches."

Turning our attention back to "noted Nissan GT-R tuner Iain Litchfield," he was there with the Model S because he wants to be the first to "tune the bejeezus out of it," says Holland.

A note on Robb Holland, per Jalopnik:

"Robb Holland is a professional race car driver for Rotek Racing and friend of Jalopnik who basically lives at the Nürburgring most of the year. He is also the tallest man in Germany."