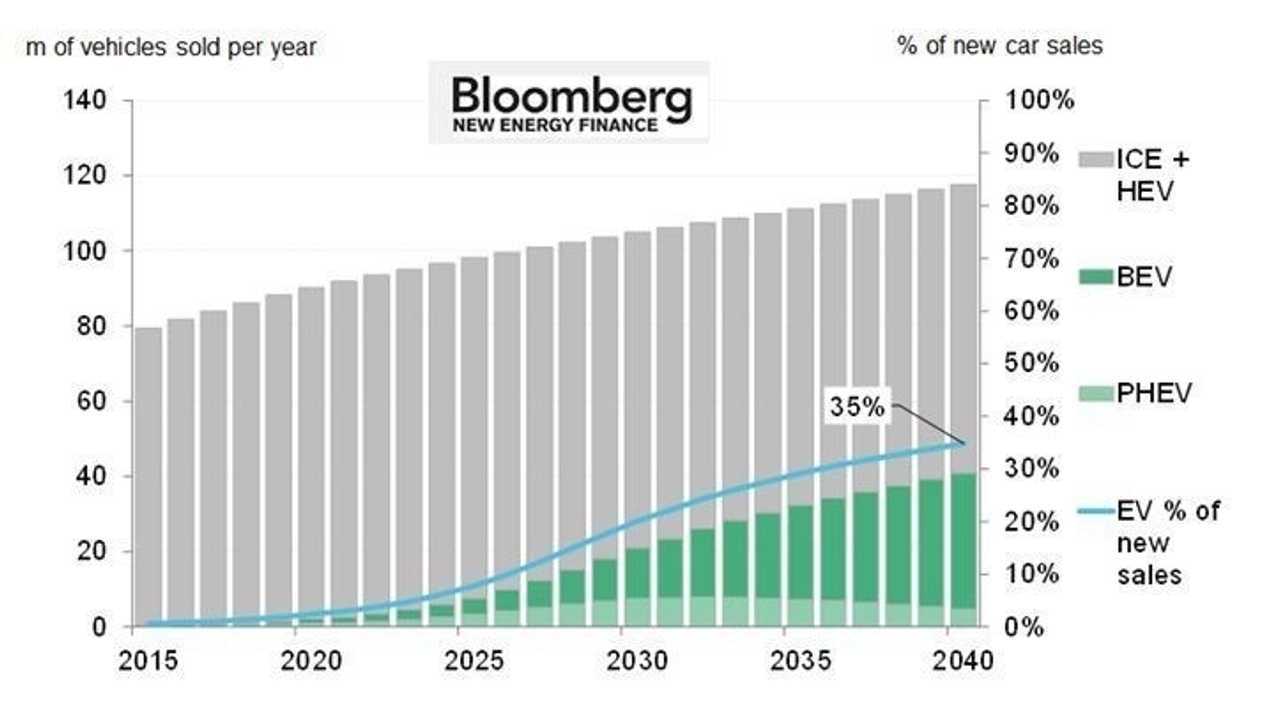 Their main statement is that by 2040 EVs (pure electric and plug-in hybrids) will take 35% market share of new car sales. That concerns global average so there sure should be places where EVs will be in majority.

By 2025 BNEF expect total cost of ownership of EVs below that for conventional-fuel vehicles assuming continuing reductions in battery prices and "even with low oil prices".

"The electric vehicle revolution could turn out to be more dramatic than governments and oil companies have yet realized. New research by Bloomberg New Energy Finance suggests that further, big reductions in battery prices lie ahead, and that during the 2020s EVs will become a more economic option than gasoline or diesel cars in most countries."

One interesting tidbit is the different take-offs for pure electric cars (BEVs) and plug-in hybrids (PHEV), which is projected to fade after 2030.

Bloomberg New Energy Finance: It's all about the batteries

"The electric vehicle market at present is heavily dependent on "early adopters" keen to try out new technology or reduce their emissions, and on government incentives offered in markets such as China, Netherlands and Norway. Although some 1.3 million EVs have now been sold worldwide and 2015 saw strong growth, they still represented less than 1% of light duty vehicle sales last year.

EVs come in two categories – battery electric vehicles, or BEVs, that rely entirely on their batteries to provide power; and plug-in hybrid electric vehicles, or PHEVs, that have batteries that can be recharged but have conventional engines as back-up. The best-selling BEV over the last six years has been the Nissan Leaf, and the best-selling PHEV the Chevrolet Volt."

"The study's calculations on total cost of ownership show BEVs becoming cheaper on an unsubsidised basis than internal combustion engine cars by the mid-2020s, even if the latter continue to improve their average mileage per gallon by 3.5% per year. It assumes that a BEV with a 60kWh battery will travel 200 miles between charges. The first generation of these long-range, mid-priced BEVs is set to hit the market in the next 18 months with the launch of the Chevy Bolt and Tesla Model 3."

We noted key forecasts from the report:

"At the core of this forecast is the work we have done on EV battery prices. Lithium-ion battery costs have already dropped by 65% since 2010, reaching $350 per kWh last year. We expect EV battery costs to be well below $120 per kWh by 2030, and to fall further after that as new chemistries come in."

Salim Morsy, senior analyst and author of the study, commented:

"Our central forecast is based on the crude oil price recovering to $50, and then trending back up to $70-a-barrel or higher by 2040.1 Interestingly, if the oil price were to fall to $20 and stick there, this would only delay mass adoption of EVs to the early 2030s."

"In the next few years, the total-cost-of-ownership advantage will continue to lie with conventional cars, and we therefore do not expect EVs to exceed 5% of light duty vehicle sales in most markets – except where subsidies make up the difference. However, that cost comparison is set to change radically in the 2020s."