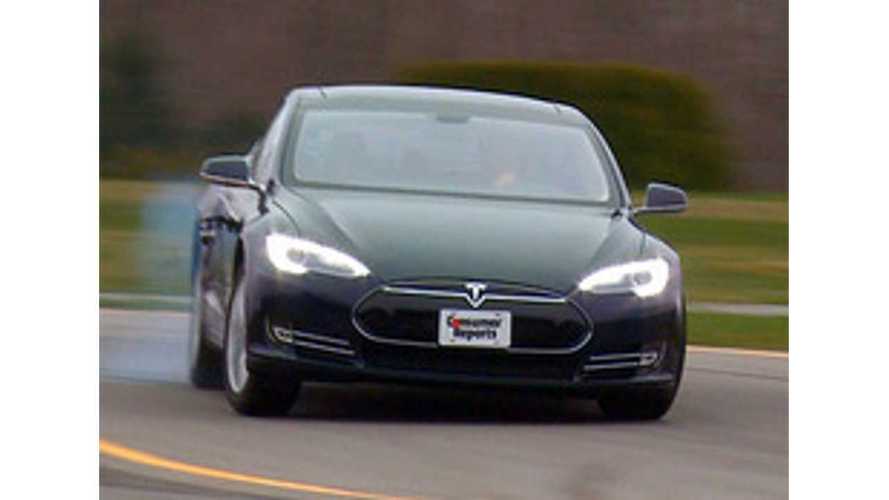 The safest vehicle in the US is now the most satisfying, too.

With a satisfaction score of 99 out of 100, Consumer Reports says the Model S scored the highest in this category in years.

99 out of 100 is remarkable.  Jake Fisher, Consumer Reports’ director of automotive testing, stated:

"In testing, the Model S stands out for its innovative design, outstanding performance, and surprising practicality.  These results suggest Tesla owners are very, very satisfied."

Of note: The Tesla Model S knocked the Chevy Volt (holder of the #1 spot for 2 years running) out of the top spot in the Consumer Reports' customer satisfaction survey.  The top three spots now look like this:

If you recall, Consumer Reports rated the Tesla Model S 99 out of 100 in its overall ratings, too.  That score awarded Tesla the honor of being the highest-ever rated vehicle by Consumer Reports:

“Slipping behind the wheel of the Tesla Model S is like crossing into a promising zero-emissions future. This electric luxury sports car…is brimming with innovation, delivers world-class performance, and is interwoven throughout with impressive attention to detail. The sum total of that effort has earned the Model S the highest score in our Ratings: 99 out of  100. That is far ahead of such direct competitors as the gas-powered Porsche Panamera (84) and the Fisker Karma plug-in hybrid (57).”

Looking for even more Consumer Reports info on the Tesla Model S?  Here you go:

YONKERS, NY — Consumer Reports annual owner-satisfaction survey generally finds the cars that inspire the strongest consumer loyalty are typically vehicles that are either fun to drive, deliver great fuel economy, are fashionably green, or envelop owners in a high-tech, luxurious driving environment. This year, the Tesla Model S all-electric luxury sports sedan, which provides all of those attributes, tops the ratings.

Owners of the Tesla Model S gave it the highest owner-satisfaction score Consumer Reports has seen in years: 99 out of 100. While the $89,650 Model S isn’t for everyone, CR collected more than 600 survey responses from owners of 2012 and 2013 models. Moreover, its owner-satisfaction score matches the near-perfect 99 overall test score the Model S earned in Consumer Reports’ performance ratings.

Consumer Reports’ annual owner-satisfaction survey, conducted by the Consumer Reports National Research Center, generates ratings by asking subscribers a key, revealing question, “Considering all factors (price, performance, reliability, comfort, enjoyment, etc.), would you get this car if you had it to do all over again?” A model’s score is based on the percentage of respondents who answered “definitely yes.” This year, Consumer Reports received responses on about 350,000 vehicles and more than 285 models and variants spanning the 2011 through 2014 model years.

Luxury and high-performance cars tend to do well in CR’s owner-satisfaction ratings, and Audi had more high-scorers than any other luxury brand. But models without a prestige brand or a sporty focus also made a mark. The redesigned Mazda6 and Subaru Forester, for example, are moderately priced, mainstream vehicles that outscored all models from BMW, Lexus, and Mercedes-Benz.

“Novelty can play a big role in launching a car into the top ranks, which isn’t surprising because brand-new designs can generate a lot of excitement. But enthusiasm can wane quickly if a car turns out to be not very special,” said Anita Lam, Consumer Reports automotive data program manager.

That’s the case with the Toyota Prius C hybrid, a smaller version of the regular Prius. It garnered one of the highest scores in its 2012 debut year but dropped a significant 10 points this time around. Other cars that faded significantly in their owners’ estimation were the Chrysler 200, Hyundai Sonata, and Subaru Impreza hatchback.

In past years, CR’s survey showed that“green” fuel-efficient cars, including electrics, hybrids, and fuel-sipping diesels, have also done well as a class in owner satisfaction, even though they aren’t known for outstanding comfort or engaging performance. Especially notable is the Chevrolet Volt plug-in hybrid, which finished first in 2011 and 2012 surveys. It slipped to third this time, but its score of 91 was only one point lower than last year’s. Volt owners continue to love the car about as much now as three years ago, suggesting that the Volt has some staying power beyond its novelty.

At the other end of the spectrum was the subcompact Nissan Versa sedan which garnered the lowest score for the second year running. Only 45 percent of its owners said they would definitely get the bargain-priced sedan again. Other models that didn’t generate much enthusiasm in their categories are the Nissan Rogue and Jeep Compass small SUVs, Acura ILX compact luxury sedan, Kia Optima Hybrid, four-cylinder Chrysler 200, Kia Sedona minivan, and Nissan Armada large SUV.

Consumer Reports is the world’s largest independent product-testing organization. Using its more than 50 labs, auto test center, and survey research center, the nonprofit rates thousands of products and services annually. Founded in 1936, Consumer Reports has over 8 million subscribers to its magazine, Website and other publications. Its advocacy division, Consumers Union, works for health reform, food and product safety, financial reform, and other consumer issues in Washington, D.C., the states, and in the marketplace.