These videos had us literally laughing out loud.

The above video is the first in a new series entitled "Kicking Gas." We've included the teasers of the upcoming videos below. Once they're published, we'll share them with you.

The videos are produced by the nonprofit organization Veloz for its “Electric For All” campaign. Arnold Schwarzenegger and Mary Nichols have officially teamed up with Veloz to assist with the campaign. Nichols is the chairwoman of the California Air Resources Board (CARB). She was actually appointed by Arnie when he was the governor of California. 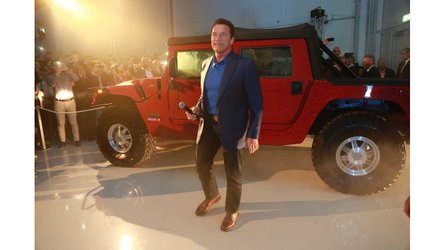 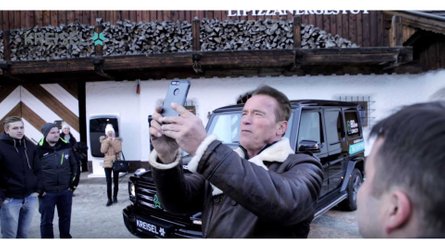 Scroll down past the videos and check out the full press release by clicking on the provided link.

Los Angeles -- Today, the dynamic duo that made car history is at it again. After driving some of the most innovative changes in the automobile sector—making cars and trucks cleaner—former governor and megastar Arnold Schwarzenegger and Mary Nichols, chair of the California Air Resources Board and founding Veloz member, are focusing on the next big thing: going electric. And they are joined by automakers, utilities, environment and government leaders in the launch of Kicking Gas, an unlikely campaign that reveals why everyone should drive electric.

Kicking Gas is an edgy, funny series of movie shorts produced by the nonprofit Veloz for its “Electric For All” campaign—the largest and most inventive multi-stakeholder public-awareness campaign for electric cars in the United States, targeting Californians first.

“We chose humor—not fear or fury like some people—because negative emotions are burning people out,” said Arnold Schwarzenegger. “Humor, on the other hand, lights people up. Besides, we figure the world could use a little laughter just about now.”

“Tough guy Arnold Schwarzenegger has no problem making fun of himself. Imagine a world leader like that—willing to do what it takes for the greater good,” said Mary Nichols, who serves on the Veloz leadership team. “For some members of our unlikely coalition, this campaign is tricky and treads difficult territory. Change is hard. But everyone knows the future is electric, and California, for one, is committed to capturing the market advantage.”

“Our goal with Kicking Gas is to bust barriers and kick down the norms of traditional electric car campaigns,“ said Josh Boone, executive director of Veloz. “Veloz brings together an unlikely coalition of automakers, public-policy leaders and other sectors as positive world changers. We are focused on igniting public imagination through innovative and bold messaging—electric cars are more fun, have more performance, and are more exciting than other cars. Everyone should know they are simply the best drive ever.“

The campaign aims to address the biggest barrier to electric car adoption: lack of public awareness. More than 50% of Californians know next to nothing about electric cars, according to UC Davis research. A new survey of Veloz members released today found that most sector leaders see other barriers—cost, range, choice, charging infrastructure—are disappearing fast, leaving lack of public awareness as the single largest obstacle to electric-car market growth. (See survey results below.)

“Over 16 years ago, I set out to prove that you can have the car you love and the clean air you need,“ said Schwarzenegger. “I greened my fleet of personal cars, including my Hummers. And I challenged the auto industry to do the same. They now have the electric vehicle technology to outcompete gas-powered cars.”

During the Schwarzenegger administration, California established the country’s first climate pollution cap, and mandated vehicle emissions reductions to meet it. The then-governor and Mary Nichols set the stage for a historic agreement with automakers, establishing a national standard now in jeopardy.

“California is moving ahead to electrify our transportation. We cannot wait for clean air, nor can we miss this trillion dollar market opportunity,” said David Hochschild, chair of Veloz. “As the fifth largest economy in the world, we have the power to change the global market. Veloz is bringing the muscle to turbocharge public awareness, and there is no better messenger to pump up excitement than the Governator himself.”

Electrified transportation represents a multi-trillion-dollar market opportunity. Bloomberg New Energy Finance predicts 57% of all passenger vehicles will be electric in little over 20 years.

Transportation is outpacing every other sector when it comes to carbon and other toxic emissions. Pollution from gas and diesel cars and trucks poses a critical threat to public health and the planet, causing 53,000 premature deaths each year, and transportation is America’s biggest contributor to greenhouse gases. Scientists say time is running out if we are to avoid the worst effects of climate change, and our country is already feeling the effects.

Sector leaders overwhelmingly identified lack of consumer awareness (62%) as the major barrier to electric car adoption today, scoring that choice 20 points higher than any other answer.

This is not a typical awareness campaign. It is a multi-stakeholder effort with extraordinary reach that will harness Veloz’s board and member organizations, traditional and social media, and larger-than- life visibility.

Whether on YouTube or IGTV or driving down L.A.’s 405, Californians are going to run into used-car salesman Howard Kleiner (Arnold Schwarzenegger’s character) thanks to:

The campaign is designed to reach potential electric car owners with:

Shot in a car dealer’s lot in Burbank, Calif., the entire production was undercover. Cameras and microphones were hidden throughout the dealership.

Oak Productions. Arnold Schwarzenegger donated his time and the time and resources of his production company to the campaign.

Director Josh Greenbaum is an American film director, screenwriter, and producer. He has won an MTV Movie Award, CINE Golden Eagle and Emmy Award. He directed the feature documentary The Short Game, which was acquired by Netflix to launch its Originals film division; and created Behind the Mask, which earned Hulu its first ever Emmy nomination. https://joshgreenbaum.com

Bullitt is a filmmakers collective and creative studio situated at the nexus of entertainment and advertising. http://bullittbranded.com/

Rickett & Sones is the director/photographer duo based in Los Angeles responsible for all still photography. http://www.rickett-sones.com/info

About the Campaign Organizer

Veloz is a nonprofit organization made up of a high-powered, diverse board and members from key sector companies, agencies and nonprofits. Veloz organizes the “Electric For All” campaign, the largest and most inventive multi-stakeholder public-awareness campaign for electric cars in the United States. With unparalleled stakeholder leadership, Veloz is uniquely able to accelerate awareness and ignite passion for electric cars through public-private collaboration, public engagement and policy education innovation.