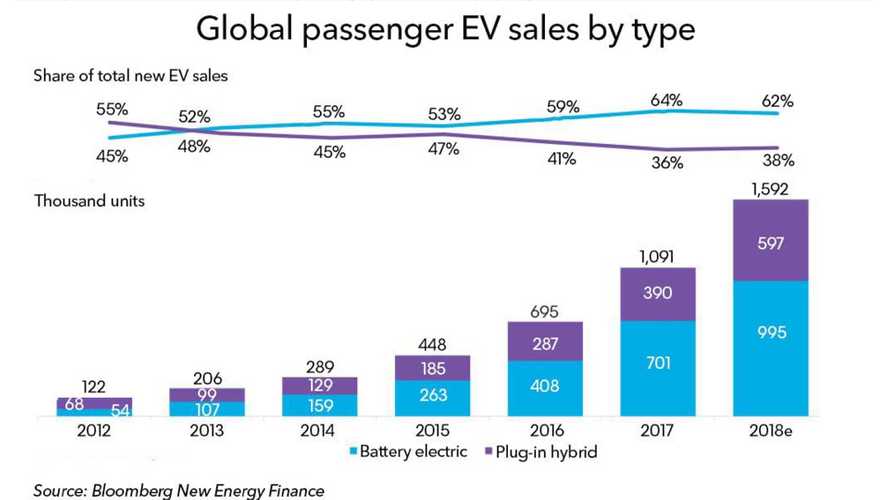 According to the latest Bloomberg's Electric Vehicle Outlook 2018, the plug-in electric vehicle market is bound to succeed.

We know that some expect even faster pace of growth, but even that forecast means we are just one generation away from the fade of ICE.

The electrification will be lead by China, the biggest automotive market. Chinese share in plug-in car sales to be 50% in 2025 but then will decrease below 40% in 2030.

The main force behind the upwards push of electric cars is to be battery prices - lower and lower. In 2010, battery packs were estimated to cost $1,000 per kWh, while in 2017 just $209 per kWh. By 2030 Bloomberg sees $70 per kWh possible. At the same time energy density is higher so are the range of new models.

All that should enable cost-parity on an unsubsidized basis between BEV and ICE cars to start in 2024. By 2029 it's expected that BEVs will become competitive in almost all segments of the market. Why would one purchase gasoline car then, if the all-electric mid-range or long-range car would be at a lower price and generate savings on fuel? A foretaste of this phenomenon we already see in the high-end segment, where long-range, premium/luxury BEVs are comparably priced and often with better performances than ICE.

The market for electric buses, will be developing even quicker than cars - the routes are fixed, the emissions are more severe and there are depots/bus stops to facilitate charging stations.

On the other hand, the market of battery materials like cobalt and lithium will be pretty volatile. By 2040 electrified buses and cars will displace a combined 7.3 million barrels per day.