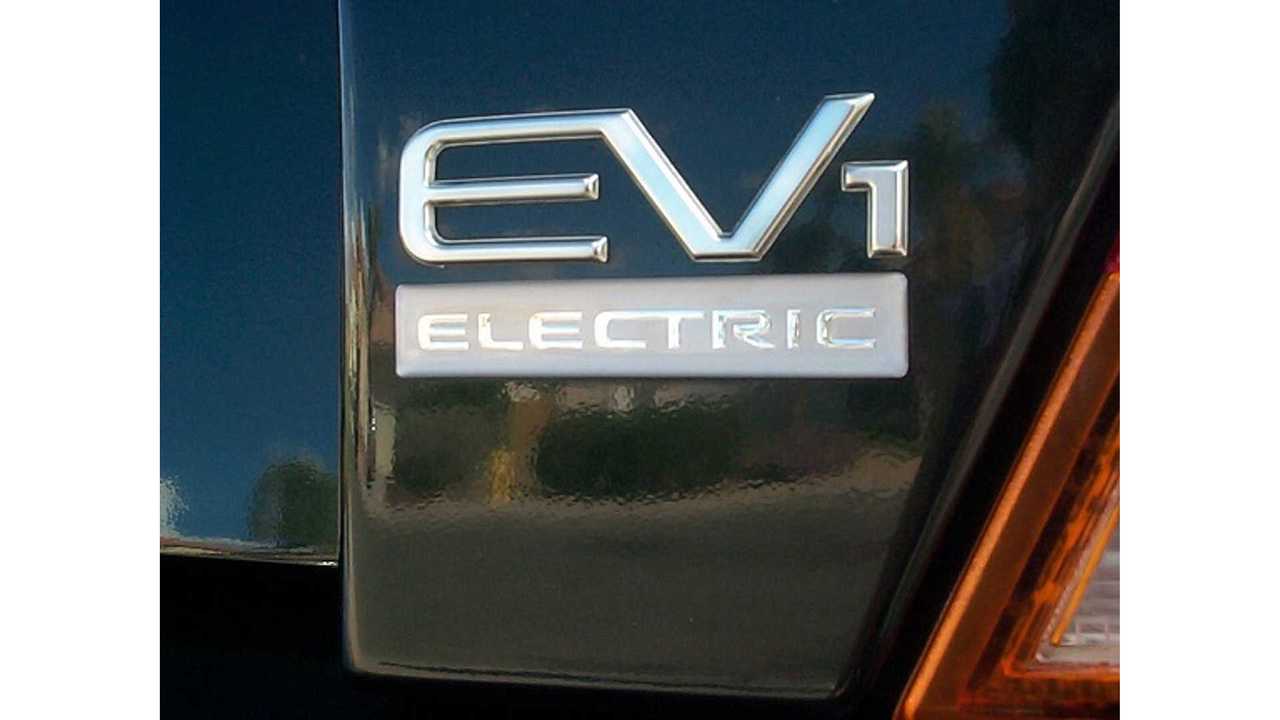 Editor's Note:  If you missed part one on the behind-the-scenes 411 on General Motor's EV1 project, you can check it out here.

Mark Hovis (InsideEVs): The question that Sam Dellinger and I have which is covered in the film (Who Killed the Electric Car) is how could GM justify crushing the EV1s?

John Dabels: That is relatively simple answer.  It starts with controlling the distribution of the cars.  I fully support GM's decision.

Mark Hovis: To crush the cars??

Mark Hovis: I buy that. Our contributors at InsideEVs understand the lease.

John Dabels: The mistake GM made was not to lease the EV1’s again and even a 3rd time.

Mark Hovis: Why wouldn’t you put them in a museum?

John Dabels: There are few around.  (Editor's note: there is about 40 still in existence in one form or another today)

Not The Best "Final Image" Of The EV1

John Dabels: The disposal of the cars was poorly handled, I agree with that.  As far as the reason, it was the triggering of the title that GM was concerned about.  Anyway that is the rationale for that.

Mark Hovis: It looks like GM could have gotten the word out better on this issue. Failure to do so left it open to the conspiracy.

John Dabels: A little more insight into the inner workings of the EV1 program.  Toward the end of 1992, GM is still hemorrhaging cash.  The Board replaces Bob Stempel as CEO with Jack Smith.  If you cut through all the official press releases, what occurred was a palace coup – the Financial staff takes over the CEO position with the help of Board member John Smale of P&G, who became chairman.  Neither Smith nor Smale is what anyone would call a car guy.

I wish discussion of the palace coup would come out more when people are assessing the EV1 program.  I’m not naïve about the financial needs of a company.  I spent my early years at GM on the financial staff.  But what a lot of financial staff people do not understand is where profits come from.  I know that statement might seem odd but financial guys seem to spend more time looking at how to reduce cost than how to generate more revenue.  Show me a company that saved its way into prosperity.

Hovis: OK but how did the financial guys really affect the EV1?

The Only "Functional" GM EV1 Given To The Smithsonian. This particular EV1 was returned to GM in 2000 by Leasee Phil Karn (phot0 via Jeff Tinsley)

John Dabels:  The most vivid example occurred at one of the regular meetings with corporate staff.  Time is Fall 1992.  There are eight people in the meeting, which is held at the then GM building on West Grand Boulevard.  The conference room is near the Board room.   There are four of us and four corporate staff.  Bob Stempel is the only non-financial guy from the corporate staff. The meeting starts at 3:00.  A portion of the meeting addresses all the positive publicity the EV1 program is generating for GM.

We stress that much of the positive image of GM is among younger people, who have shied away from most GM products.  Jack Smith, then GM president, asks “Are many of these people  old enough to buy cars and if not what do we care?”   That question is a perfect example of the difficulty in educating the financial staff on the value of the program.  Take someone who is say 14 years old now.  Do you know how many cars they are going to buy in their life?   They might buy twenty cars or more.  You want that person to consider your product.  Don’t make them mad! (Not John's exact words)

Now, in all fairness, we (GM) had financial pressures at that time.   But the meeting was effectively the death knell of the EV1.   At 5:00 Jack stands up, turns to Bob Stempel and says “Bob, you can’t afford the program.” A few days later, the board meets and asks Bob Stempel to resign and puts Jack in as CEO.

That part of the story never gets told.   But the story is indicative of a program going from having support by senior management  to no support.   At the same time worldwide you’ve got all this interest and positive publicity about GM.  But it was ignored.

After the palace coup, the hatchet is taken to the  program. Jack Smith’s team was heavy on financial guys.  A few years later Rick Wagoner, also a financial guy replaces Jack Smith.  So was the decision to cut back on the program a right one?  A number of years later Rick Wagoner admitted cutting back was a mistake.  Here was a tiny program by automotive standards generating very positive publicity and many product innovations.

Sam Dellinger: Boy, that must have been frustrating.

John Dabels: Understatement of the week.  We used to rank information according to credibility. Word of mouth is number one and media is number two.  So where is advertising? Toward the bottom of the credibility scale. We tried to explain how the $6- 8 million marketing budget was worth some maybe $600-800 million worth of advertising.

John Dabels: Elon Musk understands  very well the value of the media.  We could have used him.  With the positive press about EV1, GM had more families coming to showrooms – Buick, Chevrolet, Cadillac and other divisions – than you would otherwise.  You have a teenager saying “You know what dad, GM has an EV1  program and it is really cool.  Let’s go look at their cars“  Tell me any father that doesn’t want to be “cool.”

Sam Dellinger: I agree the car was cool.  Still is.

John Dabels: But none of the value of the media coverage was ever recognized by the financial staff.

Mark Hovis: What about sales volume?  Wasn’t that important?

Dabels: The EV1 program  was always going to be limited volume. By automotive standards, Tesla volume is a rounding error. Yet they’ve got all the press with this tiny volume. Musk understands the value of the media.  The unit volume for EV1 never should have mattered but it did matter.

Mark Hovis: What would the EV1 program look like today had GM stayed the course?

John Dabels: EV1 would be the number #1 electric vehicle.  GM would be miles ahead. There would be a lot more people in EV’s.   GM would have more overall market share…and might have avoided bankruptcy.

Mark Hovis: You spoke of the land speed record.

John Dabels: Yes.  183 miles per hour. Not bad for what some people considered a glorified golf cart. We  modified a pilot production car and set the land speed record.  What also took a regular EV1 and had a drag race with a Miata, and Nissan 280ZX.  The EV1 won, of course.  I think the video is on YouTube.

Below: Video John was speaking of

Sam Dellinger: Anything else?

John Dabels: That’s enough for now.  Some parts of the story you might not have heard.  When people ask about a conspiracy, I tell them there was no conspiracy to kill the car because we weren’t smart enough to think of one.   I’ve given this a lot of thought and I believe the reason the Ev1 died was due more to a lack of understanding inside the company of EV1’s value, rather than some external force. The real story of EV1’s demise might not be as exciting as the film but it is a lesson for all.

Many Thanks to John Dabels for a walk down memory lane. If you had a question for John Dabels, what would it be?

Some questions answered in Part 3