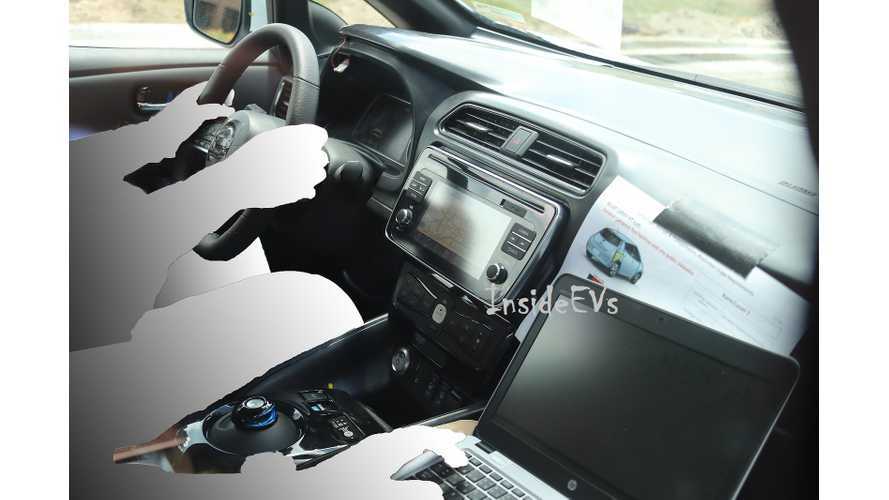 Despite Nissan's promise to continually release new images and information on its upcoming next generation LEAF, which officially debuts at a special event on September 6th in Tokyo (or Sept. 5th for most of the rest of the world), that really hasn't happened as of yet.

Since May 18th, all we have seen is a lone shot of the driver's side front headlight assembly.  Big whoop!

Fortunately, our spy photographers don't care so much about Nissan wanting to keep the 'cat in the bag' and have taken some of the best new shots of the 2018 LEAF out testing on the road today - both inside and out!

2018 Nissan LEAF spotted in the wild with a lot less camo!

Thankfully, the Nissan-installed exterior "trash bag camo" on the last set of spyshots we uncovered have now been replaced in favor of just standard vinyl camouflage.

Also, we have the first look at the interior of one of these new Nissan LEAF test vehicles!

The fit and finish look fairly "production-intent" to us, and demonstrate a refined version of the set-up found in the current generation.

On the outside, we still aren't sure what to make of what appears to be a false grill up front below the new charging port - definitely a styling change over today's LEAF, but the headlights are definitely an upgrade.

The rear hatch has also been toned down to look a bit more conventional; which could be the theme of the 2018 LEAF judging by these photos.

Overall, we agree with the direction Nissan is clearly taking here with bringing the new LEAF into the styling fold of the rest of its lineup, but really the success of the 2018 Nissan LEAF is really going to based on 2 things:  battery/range and pricing.

The next generation LEAF will begin deliveries in the US in December/Europe in early 2018, and is expected to have a starting MSRP from the low $30,000s when equipped with a base trim/battery package that is good for about ~150 miles of range. A longer range option (~60 kWh) is said to be available in 2018, which pushes the available driving distance north of 200 miles.