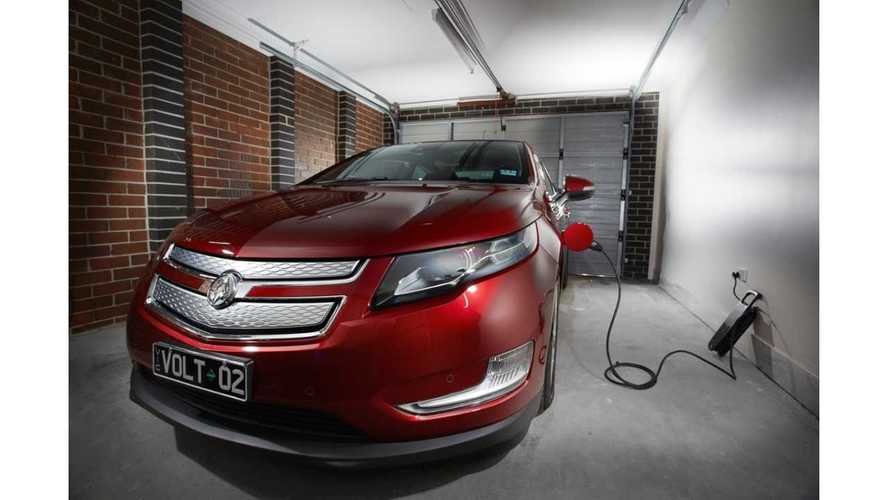 Holden Volt - Driverless Technology In Effect...Pretty Sure That Is The Only Explaination For This Shot

The first network of specialist dealers haved added a Volt to their demonstration fleet this week and will be delivering the first cars to customer over the next few days.

Unfortunately, Holden Engineers Accidently Put The Steering Wheel On The Wrong Side Of The Car In This Early Prototype

In Australia, you can own one of the first shiney Volts for $59,999 AUD, which is about $62,700 US dollars.  Which, although it seems expensive, is really...well, yes it is expensive, but anything with a plug is expensive down under.

Worth noting, the Holden Volt does get 87 km (54 miles) down under, thanks to GM's finding that "80 per cent of Australians living in major capital cities commuting less than 80 kilometres in a single day," and a much laxer rating system in Australia.

Regardless, Holden Executive Director of Sales and Marketing, Philip Brook, said there had been strong interest in Volt since dealers were announced in June and television advertising had begun.

“Volt really seems to have captured people’s imagination thanks to its range extension technology. As the first car of its kind to go on sale in Australia, drivers want to understand how the technology works and what it feels like to drive and live with an electric car.

Now that the dealers have a permanent demo on hand, customers will be able to experience the unique technology of Volt for themselves.”

As part of the Holden's Volts advertising pitch, they have been featuring an augmented reality app, that when used in conjunction with the Australian Volt's sales brochure is really swell.

Have a look at the app in action below (complete with requisite Aussie accents that will have you doing impersonations for your friends all day).  If you then want to give it a spin yourself, you can download and print the brochure here, and the app from the iStore here.