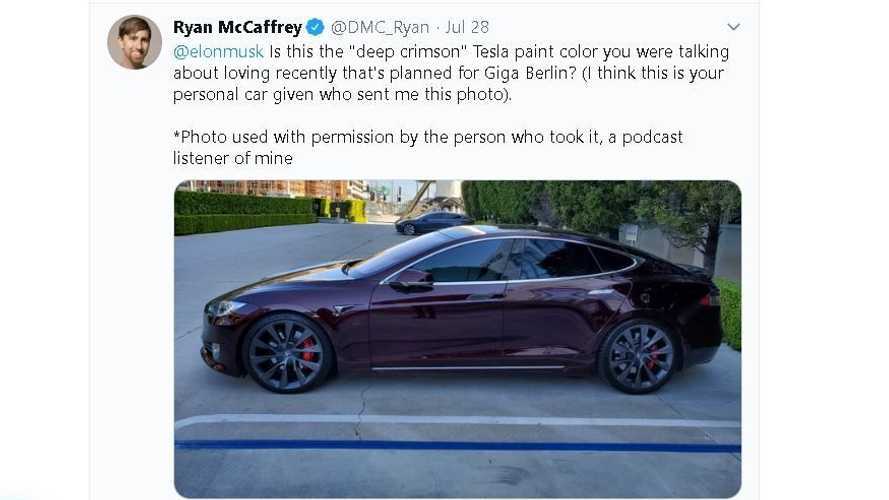 We know this is a prototype paint color for the upcoming Giga Berlin paint shop.

Tesla CEO Elon Musk seems pretty excited about the paint shop at Tesla's upcoming Gigafactory Berlin. He has mentioned it on a number of occasions and said that it will have the "world’s most advanced paint shop." Musk explained that the German shop will offer "more layers of stunning colors that subtly change with curvature.“

For those wondering why the Berlin paint shop will be so fantastic while Fremont's shop needs upgrading. Musk continued:

Musk also said Tesla is working on a new prototype paint color for Giga Berlin. He called it "deep crimson."

Now, we get to see what that color may look like. Ryan McCaffrey (@DMC_Ryan), Executive Editor of Previews at @IGN and Host of the RIDE THE LIGHTNING unofficial Tesla podcast received a photo from a friend. It was reportedly a shot of Musk's personal Model S. Of course, McCaffrey, who has a history of interacting with Musk, asked the CEO if this is the actual prototype color in question.

As far as we can tell, Musk didn't confirm or deny that this is his personal Model S. However, he did confirm that it's a prototype of the color.

So this must mean it's the "deep crimson" color Musk has previously mentioned. We're not 100 percent sure of that, but it makes the most sense based on his wording.

As always, we encourage you to leave your thoughts in the comment section below. Is this "deep crimson." Is it Musk's personal Model S? Let us know your best guesses.