Telsa Cybertruck Pre-Orders Soar To Over 600,000

One million is within sight now.

Tesla Cybertruck pre-orders have reportedly surpassed 600,000 and are well on the way to hit one million before the electric pickup truck launches next year.

Even more amazing is perhaps that new pre-orders are still coming in at a pace of around 1,000 per day, that's despite these uncertain times amid the COVID-19 outbreak.

Information on Cybertruck pre-orders, which are now estimated at 622,000, comes to us via Cybertruk Owners Club and this crowd-sourced spreadsheet. The club provides us with some additional info too:

As of March 30, 2020, the reservations spreadsheet (reference it below) shows 622k+ Cybertruck reservations since pre-ordering began on November 21, 2020!

The last time Elon Musk disclosed Cybertruck reservation figures was on November 26, 2019 when he tweeted that 250k pre-orders had been received. That means approximately 372k orders have been received since his last update.

To compare, the Model 3 received around 518,000 total reservations between its unveiling in April 2016 and August 2, 2017 (when Musk disclosed the gross reservation figure on Tesla’s Q2 2017 earnings call).

In addition, there are some nifty graphics that provide us with some unique details on the breakdown of reservations: 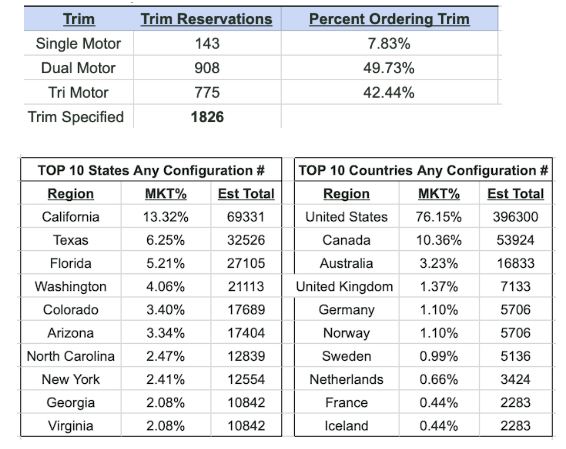 We should point out that just $100 is required to pre-order a Cybertruck, so it's not a lot of lost money if you decide to back out at a later point in time. This is likely why the figure is so high compared to say the Ford Mustang Mach-E, which requires a $500 deposit and notes 50,000 reservations now.