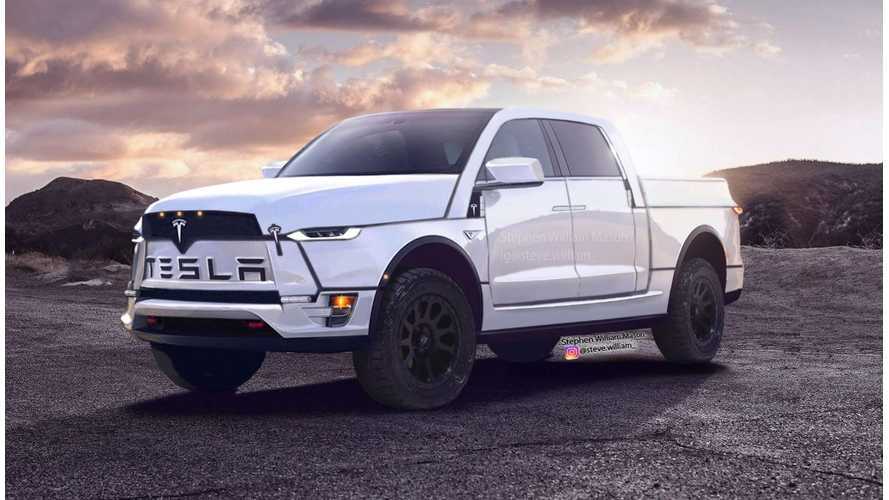 It was a rather slow week in the world of electric trucks. InsideEVs posted on the big investment into Rivian, as well as on the second attempt we've seen on bringing the Tesla truck interior to life. Additionally, a reveal date has been announced for the Tesla truck.

This is what happens when you combine elements of the Tesla Truck with the Ram 1500. See the interior of this Tesla-Ram mashup come to life right before your eyes here.

Last week, we presented the first interior sketches of the Tesla Truck. Those sketches used the Tesla Model 3 and Ford F-150 pickup for inspiration. Though the end result looked quite appealing, we had a suggestion - Do a Tesla-Ram truck. Well, here it is.

Cox Automotive controls prestigious brands like Kelley Blue Book, Autotrader, and Manheim, but it will also be part of another one: Rivian.

The company says it is due to a “unique approach to building an electrified future” and a “commitment to environmental change.” But the real reason is probably only one: Rivian seems to be a pretty good investment. Amazon and Ford realized that and put more money in the company: $700 million and $500 million, respectively.

The intriguing aspect is that Cox Automotive has always taken care of the automotive chain after car production is complete. In other words, it deals with selling, servicing and evaluating vehicles. This is probably their first move into production, even if not in a direct fashion.

We say imagined because nobody has seen the interior of this truck, nor the exterior, so this sketch is just an educated guess, but we do mostly approve of the design, which the renderer describes as a mash-up of a Tesla Model 3 and a Ford F-150 pickup truck.

Watch as this Tesla Model 3 almost gets rolled with coal by a hater in a diesel Ram pickup truck. The smart Model 3 driver (in the ultra-quick Performance version of the Model 3) avoids most of the mess and stench by slamming the go pedal and flying on by. Watch the video here.
++4