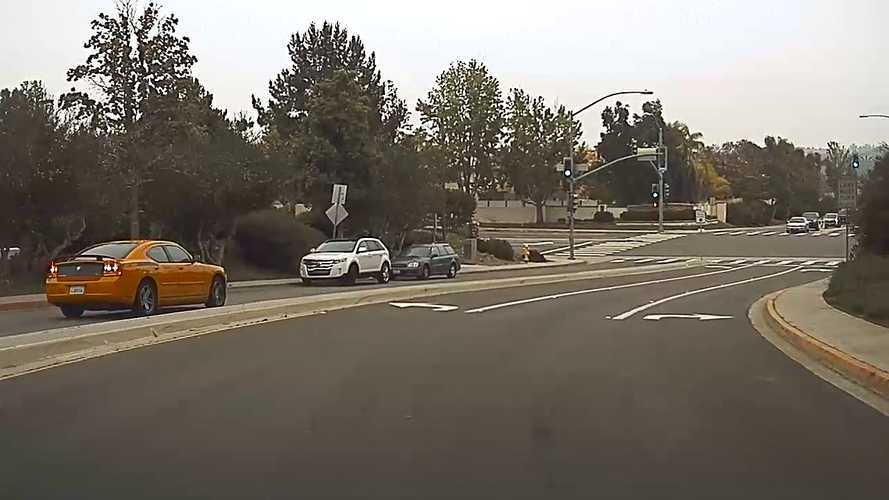 Just another week in insane footage captured on a Tesla.

Last year, Tesla made the Model S, Model X and Model 3 front cameras available for the first time as built in dash cams. While dash cams themselves have been around for decades, they are almost always after market products. Since the initial roll out, Tesla has expanded the feature to include side cameras as well.

We have seen a remarkable variety of incidents documenting cases of reckless driving, road rage, and even storm rage. Here are some of the most unique and/or bizarre happenings Tesla owners captured over the past week.

As described in the video, a GMC SUV pulls in next to a Tesla and a man exits the vehicle.Shortly after, the man returns to his SUV and moments later, a sheriff pulls up behind it. The police officer exits the car with gun drawn and orders the driver to roll down his window and put his hands up.

Watch as Tesla's Sentry Mode captures the moment that an alleged shoplifter gets busted by the police.

This parked Tesla Model 3 captures a few Jaguar salesmen checking out the slick electric car in envy. The nearby Jaguar I-Pace seems a bit saddened by the interest in the Tesla. It certainly wouldn't be unusual for a car salesman to check out the competition when given the opportunity. So they peer inside, look around the outside and seem genuinely interested in the car.

Videos have appeared of a Dodge Charger driving the wrong way on a neighborhood street not once, but twice! On different days!

Most distressingly, one of these videos shows the driver going the wrong way past a parked school bus with the children crossing stop sign visible. All other drivers have stopped for children that could be entering or exiting the bus. The driver shows a deliberate disregard for the safety of others, and hopefully this footage is enough for police to find the culprit.

This Jeep Renegade appears to catch fire starting at its underside. The driver of the Jeep doesn't notice initially, so a Tesla driver honks and flashes his lights in an attempt to get the other driver's attention. After the occupants safely exited the vehicle, the Jeep driver told the Tesla owner that a plastic-burning smell had just begun to enter the car's cabin when the Tesla began honking and flashing its lights.

This particular video shows us Teslacam on a Model 3 that captures a very wild and quite scary crash. According to the person that uploaded the video, his first reaction was to help the driver out of his car and get him to safety. Then he returned to the car and saved footage of the crash as evidence of what occurred.

Based on the number of crazy and sometimes frightening events captured by Tesla drivers in this short period of time, it's safe to say that there will be many more to come. Stay tuned.