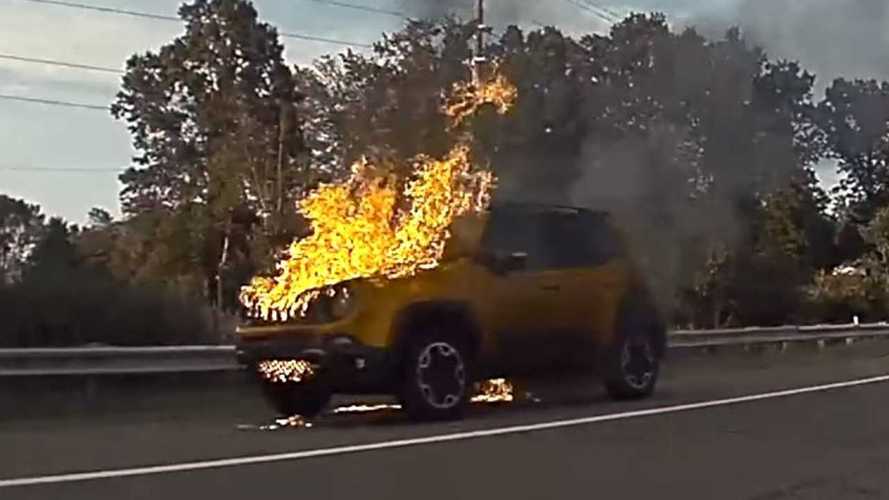 Because without Tesla in the headline, the mainstream media doesn't care.

Just another Tesla (no, it's definitely not a Tesla) fire to report on. It seems this gas-burning Jeep Renegade went up in flames.

***UPDATE: It seems the video is locked so that it only plays on YouTube. Check it out here.

Per the video description, the Jeep appears to catch fire on its underside first. The driver of the Jeep doesn't notice this right away, so the Tesla driver honks and flashes its lights in an attempt to get the driver of the Renegade to take notice.

The Jeep then pulls over and the occupants exit the car. While speaking with the Tesla driver, the Jeep driver says the plastic-burning smell had just entered the car's cabin when the Tesla was honking and flashing its lights. The Jeep quickly becomes engulfed in flames and a nearby police officer stops to block traffic.

The cause of the fire remains unknown. Nobody was injured.

Gas car fires happen all the time, yet nobody reports on them, so we're starting a humorous (we hope) series here to call attention to the 468 (average) gas car fires per day in the U.S. that get zero media coverage, versus the 10 or so EV fires annually that get massive mainstream media attention.

Why's Tesla mentioned in the headline? Without the word Tesla, it's simply not considered report-worthy news by the mainstream media if a car catches on fire.

On 7/3/2019, around 8:15 PM on I271 North, the Tesla autopilot decides to take a wrong turn and follow the I90 West exit and strangely catches a Jeep burst into flames. The first ~40 seconds of the video are the Jeep following us through the exit and eventually passing on the left. There doesn’t appear to be any obvious issues with the vehicle.

As soon as the car comes into view of the front camera (at the 0:44 mark), the bottom of the vehicle had already become engulfed by the flames. In the next 30 seconds we start honking and flashing our lights at them to try and get them to pull over. Once on the side of the road, the fire takes off and eventually engulfs the vehicle.

While pulled over, we speak to the couple with the Jeep briefly and learn that they had no idea the fire had started. They had only just started smelling plastic while pulling over after seeing us behind them. In the span of just a few minutes, an unmarked police car that was nearby stops and blocks off the left two lanes. Once we confirmed with the couple they would have a ride home, we went ahead and left the scene and turned around at the next exit.

Apologies for some of the choppiness in some spots, there were slight gaps in the captured video from the car. I also wanted to obscure the faces of people in the video.