New plants should start production within a few months and new investments emerge.

It's time for an update about Tesla's manufacturing infrastructure, which includes two electric car plants (one in California and one in China). Two new plants (in Germany and in Texas) are under construction and should start production by the end of the year or in early 2022.

The overall output appears to be limited by the "outside factors:"

"In Q3, we saw a continuation of global supply chain, transportation and other manufacturing challenges. We continue to run our production lines as close to full capacity as conditions allow. While sequential growth remains our goal, the magnitude of growth will be determined largely by outside factors."

Tesla's Fremont factory has the potential to produce up to 500,000 Model 3/Model Y a year plus up to 100,000 refreshed Model S/Model X (Model S is ramping up, while Model X production and deliveries just started).

Over the past 12 months, Tesla has produced over 430,000 EVs in Fremont, which is an all-time high for the plant. The company intends to increase the volume to an even higher level. The majority of the Model 3/Model Y production is for the North American market.

"...Fremont factory produced more cars in the last 12 months than in any other year, we believe there is room for continued improvement."

"Our Fremont factory produced over 430,000 vehicles in the last four quartersand we believe there is room for continued improvement. Model S production continued to ramp successfully in Q3and Model X production ramp and first deliveries have begun."

According to the quarterly report, the Tesla Giga Shanghai plant has the potential to produce over 450,000 Model 3/Model Y per year (no change here). The plant remains the company's export hub.

"For all of Q3, China remained our main export hub. Production has ramped well in China, and we are driving improvements to increase the production rate further."

Tesla Giga Berlin, under construction in Grünheide near Berlin in Germany, is behind its initial schedule, however, Tesla hopes that the production of the Model Y will start by the end of the year.

It's unlikely that the company will receive final permit approval sooner than in December, while customer deliveries are now expected no sooner than in early 2022.

"Factory buildout remains on track with testing of equipment well underway. We expect to receive final permit approval before the end of this year."

Tesla Giga Texas, under construction in Austin Texas, is expected to start production of the Model Y this year and Cybertruck to follow.

"Gigafactory Texas is progressing as planned. We are in the process of commissioning equipment and fabricating our first pre-production vehicles."

"We continue to target our first Model Y production builds in Berlin and Austin before the end of the year. The pace of the respective production ramps will be influenced by the successful introduction of many new product and manufacturing technologies in new locations, ongoing supply-chain related challenges and regional permitting."

The company said that is making progress on the industrialization of Cybertruck. 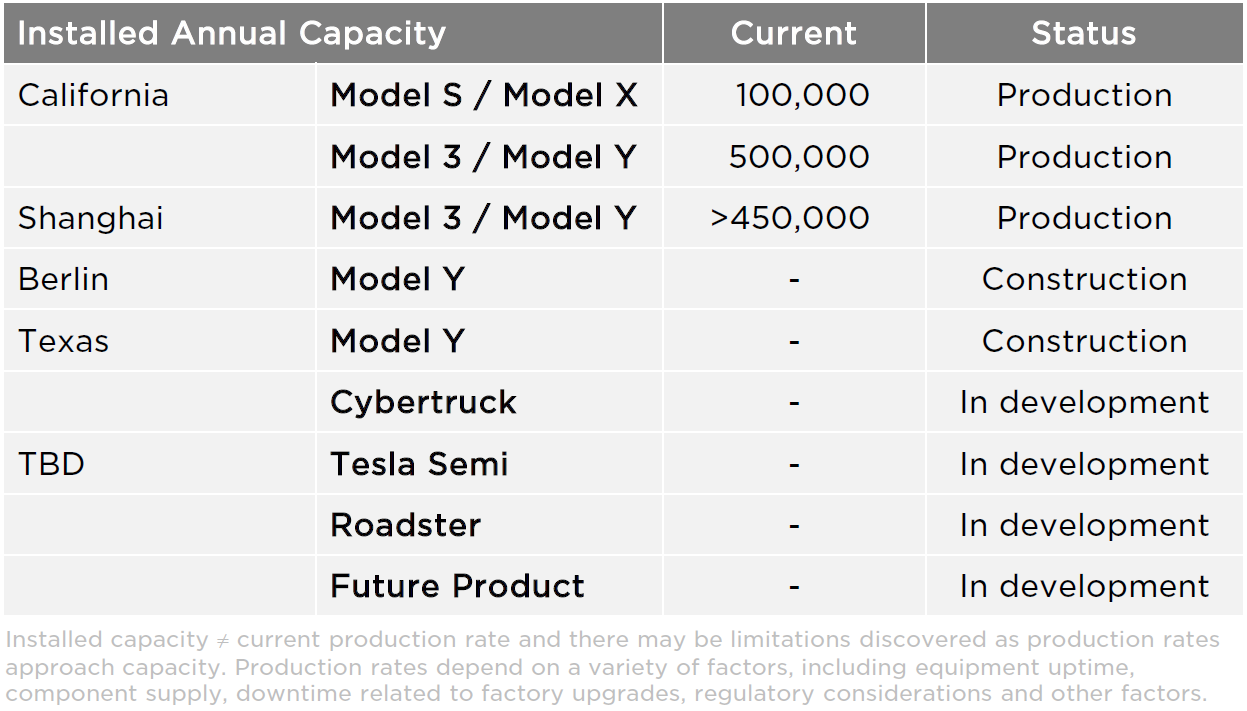