It gets sliced and diced to become a convertible too. Warning: this is definitely not suitable for work.

Watch these wacky guys jump onto the glass roof of the Tesla Model 3 and totally shatter the glass. Then one guy kicks the Model 3's interior screen until it falls apart too.

It's total destruction, but it's definitely painful to watch if you're a Tesla fan or a Model 3 owner. Heck, even if you're neither, it still hard to watch a perfectly good car get destroyed, isn't it?

Here's the video of the Model 3 getting jumped on and walked on. The hood gets badly dented and the glass roof caves right in as the guy gets on top of the car.

Next up is video of the same Model 3, but this time the touchscreen within is under attack by repeated kicks. Watch how the car seems to continue to operate normally, despite the fact that the touchscreen gets totally destroyed. In fact, Autopilot is active and remains on and under control of the car despite the torture to the screen.

The destructive force behind all of this Model 3 annihilation is Danny Duncan, a popular YouTuber who's known for cussing quite a lot and for posting videos that make him laugh, though these two videos sure do make us cringe. Yes, destroying things can be fun, but we have to draw the line when the destruction is to a perfectly good car and the end result is...well, more on that below. 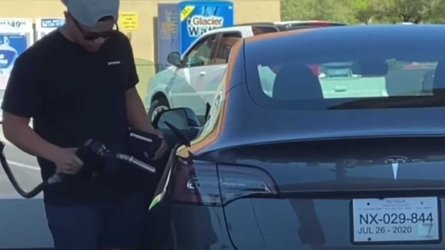 Watch This Guy's Numerous, Humorous Failed Attempts To Gas Up A Tesla Model 3
⠀ 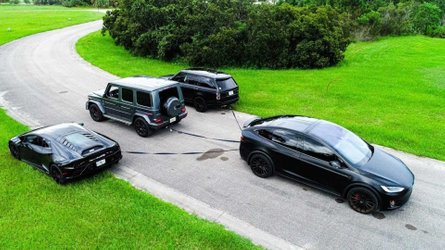 Duncan later took the destroyed Model 3 and cut it to pieces (literally, he just chops it right up) to make it into a very crude convertible. That video is below, though as with all videos from Danny Duncan, caution is advised in watching/listening as both foul language and other on-screen content might be found offensive. Watch at your own risk.