The world of electric pickup trucks will soon be filled with several entries.

How does the Tesla pickup truck compare to soon-to-be rivals like the Rivian R1T and electric Ford F-150? This comparo is a bit tricky since we don't fully know the specs for any truck outside of the R1T, but let's try to see how the Tesla stacks up.

According to Elon Musk, the Tesla truck will be unmatched, but is this to be believed? Musk has basically stated that the Tesla truck will make the Ram seem toy-like and will beat the Ford F-150 too. Lofty goals, but Tesla really never fails to deliver on the performance front.

Expectations From The Competition

Never once has Musk mentioned the Rivian R1T and its capabilities. Nor has Musk ever commented on the impressive towing feat of the electric Ford F-150. There's a reason for this, as Musk almost never criticizes other electric vehicles. Rather, Musk's focus is on destroying the gas/diesel competition.

We know very little about this electric pickup truck, but we can make some assumptions in regards to specs and performance.

The biggest hint about the electric F-150's future came in July when the company released a video of the truck towing over one million cars of train cars. The company refused to offer details about what powered the pickup, though. This towing claim came under some scrutiny though.

We expect the truck to be AWD and it'll surely be the quickest F-150. Electric motors can crank out a ton of power at basically zero RPM, so the electric Ford truck should be fast off the line. We don't know the power figures for the electric F-150, but we assume the numbers will be similar to the metrics released for the Rivian R1T.

We expect a minimum range of 300 miles and it's likely a few variants will be offered, as is the case with the Ford Mustang Mach-E.

The electric Ford F-150 will possibly debut in 2021. There's no firm timeline in place for the reveal and launch of the electric Ford truck just yet, but word is that it's being fast-tracked for production.

What don't we know about the R1T? Rivian spilled all the details on this highly capable truck when it revealed it late in 2018.

Here we sum up the important bits.

The Tesla truck's goal might be to make the Ram seem toy-like, but the Rivian R1T may well outperform the Tesla.

The easiest way to show the R1T's impressive specs is via the graphic below. It's all right there for simple viewing. Loads of power, lots of range and big batteries.

Rivian targets a starting price of $69,000 for the base version of the R1T, but the automaker notes that top-level versions will be sold first and we suspect those will go for well over $100,000. 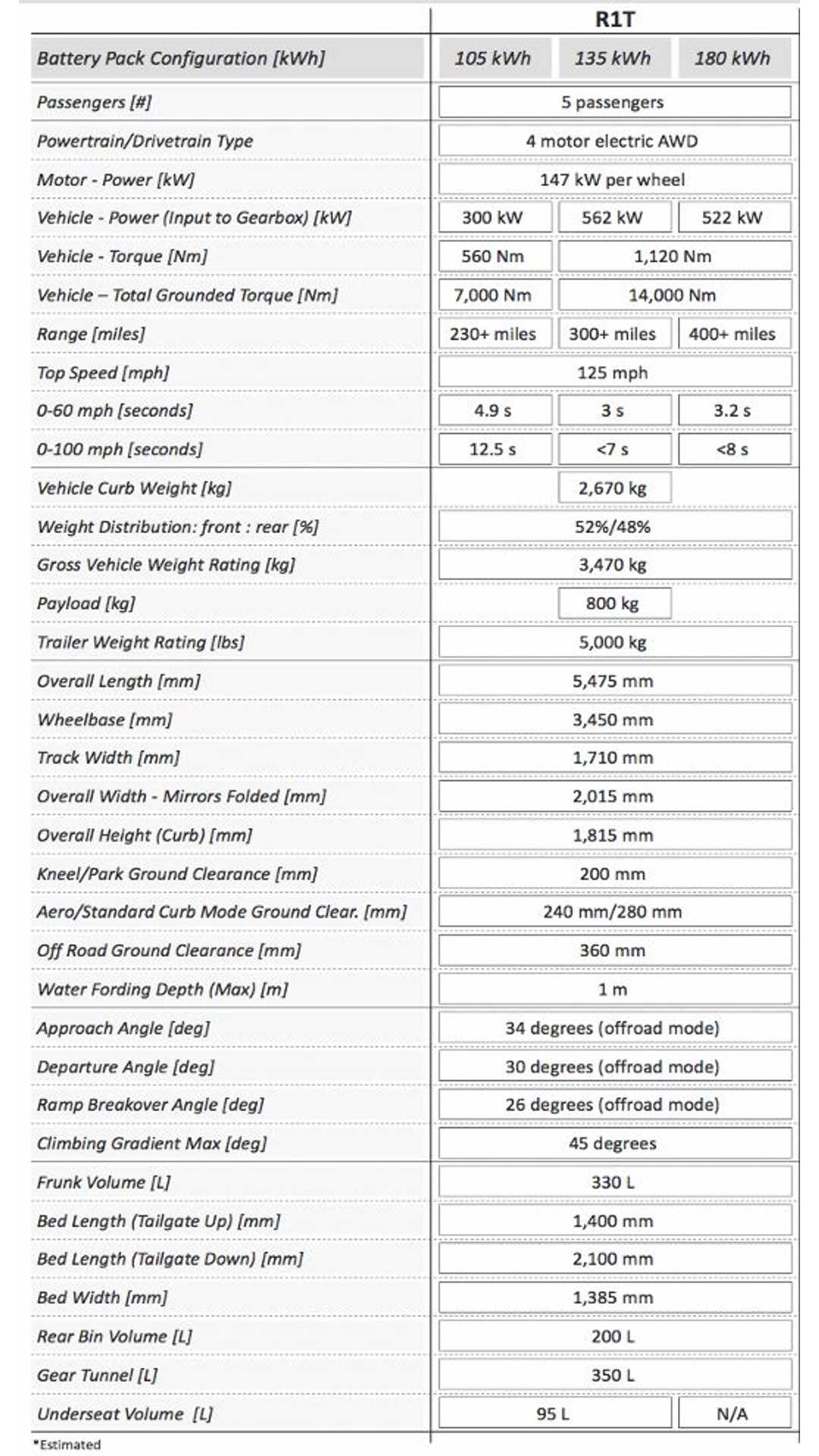