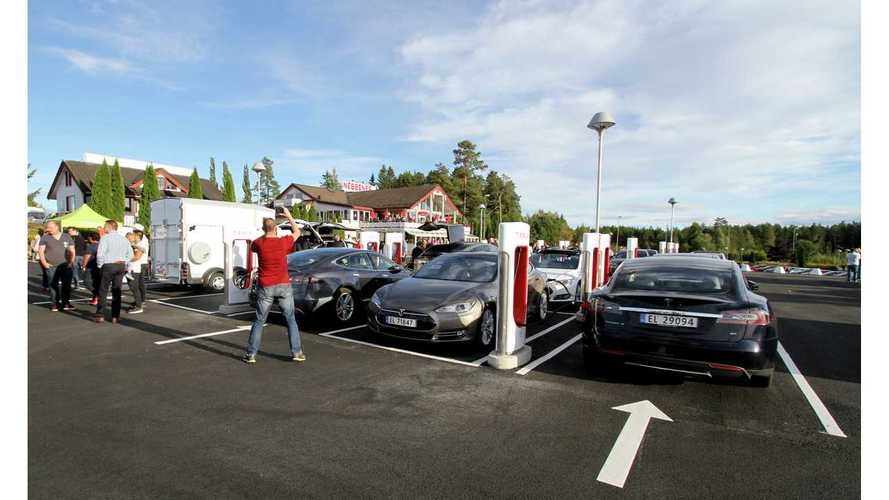 NORWAY IS A HOTSPOT FOR TESLA AND ELECTRIC VEHICLES

As the world slowly transitions to vehicle electrification, one country continues to sprint ahead. According to Quartz, "Half of all passenger cars sold in Norway  were either all-electric or plug-in hybrids — a global record, according to the Norwegian Road Federation."

Avis Ordered 280 Teslas For Fleet Use In Norway

Above: Citizens of Norway are proud of the country's rapid transition to electric vehicles (Image: The Detroit Bureau)

EV growth has been remarkable in Norway. It's reported that, "In 2013, only 6% of the cars sold in the country were all-electric or plug-in hybrids. By 2017, the year for which the most recent data is available for a majority of countries, that number had surged to 39%, making Norway the top-ranked country for electric-car sales. In second place was Iceland, where electric-car sales made up 12% of all cars sold that year, followed by Sweden, at 6%, according to the International Energy Agency."

It's not surprising electric vehicles are so popular in Norway. According to Reuters, "Norway exempts new electric cars from almost all taxes and grants perks that can be worth thousands of dollars a year in terms of free or subsidized parking, re-charging and use of toll roads, ferries and tunnels. It also generates almost all its electricity from hydropower, so the shift helps to reduce air pollution and climate change."

“No one else is close” in terms of a national share of electric cars, Norwegian Road Federation chief Oeyvind Solberg Thorsen told Reuters. “For the first time we have a fossil-fuel market share below 50 percent.”

"It should always be cheaper to have a zero emissions car than a regular car," adds Climate and Environment Minister Ola Elvestuen, who helped push through a commitment to have only zero-emissions cars sold in Norway by 2025. The plan supports Norway’s CO2 reduction targets under the 2015 Paris climate accord, reports the Associated Press.

Above: In eight years, electrified car sales skyrocketed to 50% of all car sales (Chart: Quartz)

Norway's focus on vehicle electrification has proven beneficial for companies like Tesla.  “Buying a Tesla Model X is not much more expensive than buying a standard premium Volvo because gasoline cars are taxed heavily. That is also the reason Teslas sell well,” says Christina Bu, General Secretary of the Norwegian Electric Vehicle Association.

In Norway, "Some 36 percent of all new cars sold are SUVs, which provide safety in the country’s tough winters. Tesla’s SUV, the Model X - the motor of choice for well-to-do environmentally-minded Norwegians - costs around 900,000 Norwegian kronor ($106,000)... To date, with its longer battery life, Tesla has dominated the upmarket family car space for electric vehicles."

That said, Tesla had another (albeit different) win in Norway. Electrek reports that, "Norway has historically been Tesla’s biggest market in Europe." And now, "Avis took delivery of a fleet of around 280 Tesla vehicles." A good sign for the Silicon Valley automaker. And with its European Model 3 launch imminent, Tesla remains poised for a significant Norway sales spike soon.