2023 Porsche Taycan Sees Range Gains Across The Board

Thanks to "incremental software improvements since launch," the 2023 Taycan offers EPA-estimated range gains of up to 14.2 percent.

Porsche has significantly improved the EPA-estimated driving range figures of all 2023 Taycan model variants compared to the range ratings from 2022.

The automaker says it has achieved these range gains "due to incremental software improvements since launch." While it does not provide details about specific software improvements, Porsche did mention in July that owners of 2020-2022 Taycan EVs can bring them up to the software level of the 2023 model with a comprehensive software update.

Furthermore, the software update also brought improved thermal management by better conditioning of the battery, especially at low outside temperatures.

The effect of those improvements on the driving range is now highlighted by Porsche in a table listing the EPA-estimated range figures of all 2023 Taycan model variants. The most significant increase is shown by the Taycan Turbo Cross Turismo, which goes from 204 miles of range to 233 miles—a 14.2 percent gain.

The Porsche Taycan 4 Cross Turismo also gets a significant range increase of 9.3 percent, from 215 miles to 235 miles. However, the Taycan 4 sedan only gains 3.5 percent, whether in standard guise or with the Performance Battery Plus. That’s similar to the base Taycan sedan, whose range is now EPA-estimated at 208 miles, up from 200 (+4 percent).

Obviously, the Taycan GTS sedan and the Taycan GTS Sport Turismo, which are new for 2023, retain their EPA-estimated range ratings of 246 miles and 233 miles, respectively. The former model actually has the highest range figure in the entire 2023 Porsche Taycan lineup.

Despite these welcomed range gains, the Taycan is still way behind the competition. The Tesla Model S offers 375 miles of EPA-estimated range, the Mercedes-Benz EQS 450+ sedan is EPA-rated at 350 miles, and the Lucid Air Pure base model is projected to reach 406 miles. 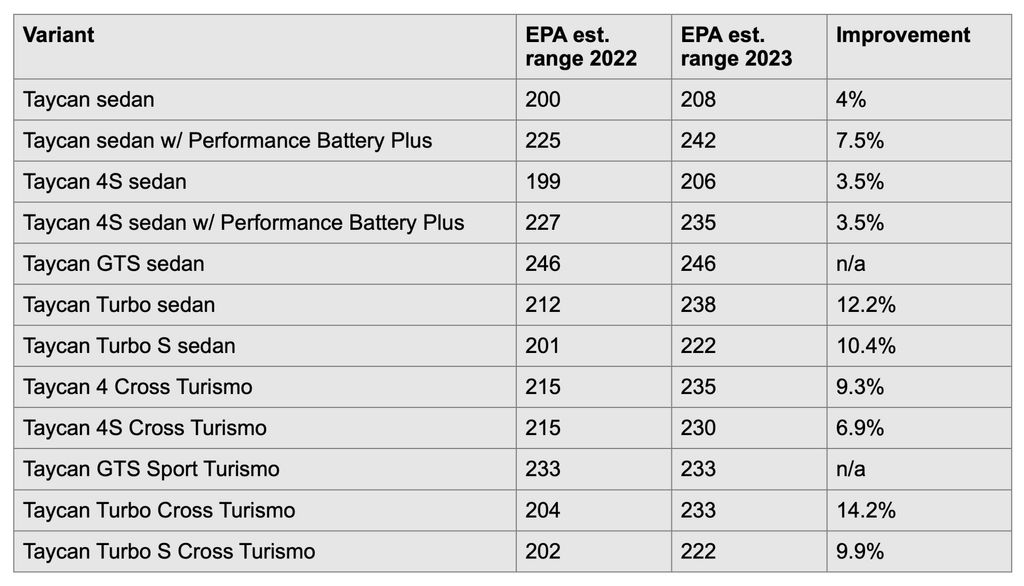 More stories about the Porsche Taycan