The plant in California is currently equipped for up to 650,000 BEVs, while the plant in Shanghai is ready for more than 750,000 units. It means that the Chinese plant is the largest site by volume.

On top of those two comes the two new plants - in Germany and in Texas - both with an installed capacity for more than 250,000 Tesla Model Y annually.

The installed capacity of more than 1.9 million does not mean that it is the current production rate, but that the plants could produce so many cars at full swing (after a ramp-up in the case of new plants).

For reference, Tesla produced and delivered more than 1.1 million BEVs during the previous four quarters, including over 250,000 in Q2 2022. One of the reports indicates a potential production in 2022 at 1.5 million.

Tesla reports that the production output is constrained, but in June, the company achieved the highest vehicle production month in its history.

"In Q2, we achieved record production rates across the company. However, we saw a continuation of manufacturing challenges related to shutdowns, global supply chain disruptions, labor shortages and logistics and other complications, which limited our ability to consistently run our factories at full capacity."

"Our Fremont Factory made a record number of vehicles in Q2. We see opportunities for further production rate improvements."

The plant remains the company's export hub and currently is undergoing an upgrade.

In June, the production rate reached a milestone of 1,000 units per month. The capacity is estimated at over 250,000 annually.

At a later point, the company intends to start production of a new version, powered by 4680-type cylindrical battery cells.

"Thanks to strong production rate improvement towards the end of Q2, our team in Germany produced more than 1,000 Model Y vehicles in a single week, using 2170 cells. We expect the production rate to continue improving through the rest of the year."

Tesla Giga Texas (Gigafactory 5) in the US

Tesla Giga Texas in Austin, Texas started production of the Tesla Model Y in April 2022. This version of the Model Y is equipped with 4680-type cylindrical cells and a structural battery pack.

However, because the supply of 4680-type cells is limited, the plant is now producing also the "legacy" version with 2170-type batteries and non-structural batteries.

"In Texas, we have added flexibility to produce vehicles with either a structural battery pack or legacy battery pack. The next generation of 4680 battery cell machinery has been installed in Texas and is in the process of commissioning. Factory output in Texas continues to grow."

The overall production capacity at the plant is estimated at over 250,000 annually.

The launch of the Tesla Cybertruck, set for production in Texas, remains delayed until at least 2023. 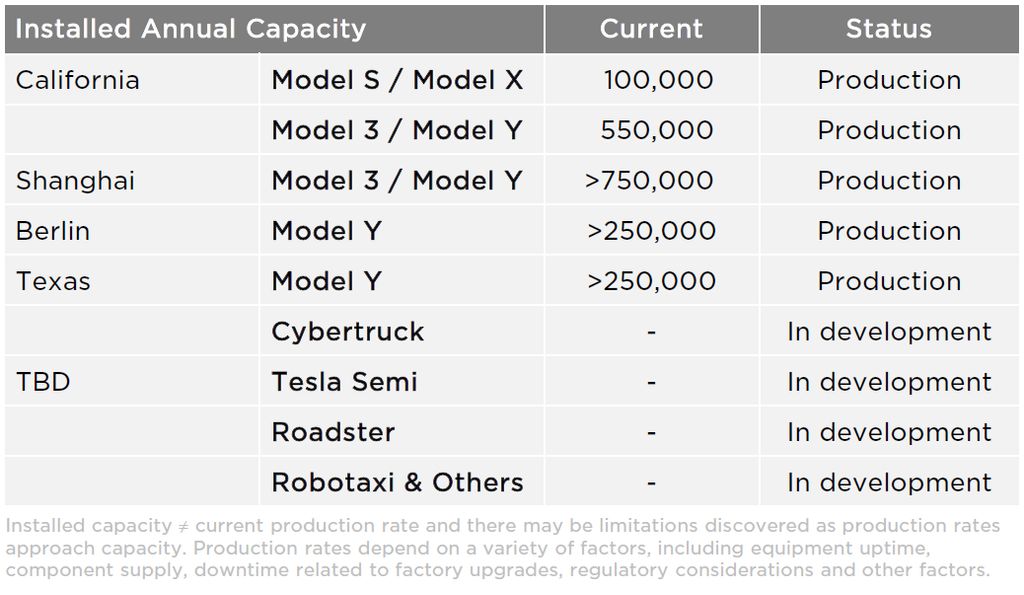