Tesla produced and delivered over 1 million BEVs during the past four quarters.

Tesla, the world's largest electric car manufacturer, highlighted in its latest quarterly report the current status of its installed capacity.

According to the company, the installed annual capacity of the two main plants - in California and Shanghai - remains the same, at over 1 million per year (total), while the two new plants - in Berlin and Texas - are in the "Early ramp" stage.

Let's note that during the past four quarters, Tesla produced and delivered more than 1 million electric cars, including over 310,000 electric cars in Q1 2022.

It's expected that at full scale, the two new plants will be able to produce at least as many cars as the two first plants (potentially even more, especially in the case of Giga Texas). It means 2+ million units per year easily. One of the reports indicates a potential of 1.5 million in 2022.

Tesla says that the plants' output is constrained:

"In Q1, we saw a continuation of global supply chain, transportation, labor and other manufacturing challenges, limiting our ability to run our factories at full capacity."

The Tesla Giga Shanghai plant has the potential to produce over 450,000 Model 3/Model Y per year (no change here). The plant remains the company's export hub.

In March/April, the plant was temporarily shut down, but currently partially restarted.

"While weekly production rates were strong in Q1, a spike in COVID-19 cases in Shanghai resulted in the temporary shutdown of our factory as well as parts of our supply chain. Although limited production has recently restarted, we continue to monitor the situation closely."

Tesla Giga Berlin, in Grünheide near Berlin in Germany, has starproduction of the Tesla Model Y (powered by 2170-type cylindrical battery cells) in March 2022.

At a later point, the company intends to start production of a new version, powered by 4680-type cylindrical battery cells.

Tesla Giga Texas (Gigafactory 5) in the US

Tesla Giga Texas, under construction in Austin, Texas, started production of the Tesla Model Y in April 2022. This version is equipped with 4680-type cylindrical cells and structural battery packs.

Interestingly, in the future, Tesla intends to produce in Texas also a version with 2170-type battery cells.

"In April 2022, we began Model Y deliveries from our new factory in Austin, Texas. At our Cyber Rodeo opening party, we delivered the first vehicles with 4680 in-house made cells, single-piece front body castings and structural battery packs. This is an important milestone for our capacity growth efforts. Later this year, we expect Gigafactory Texas will be able to produce Model Ys using both structural packs with 4680 cells as well as non-structural packs with 2170 cells."

The launch of the Tesla Cybertruck, set for production in Texas, is delayed until at least 2023. 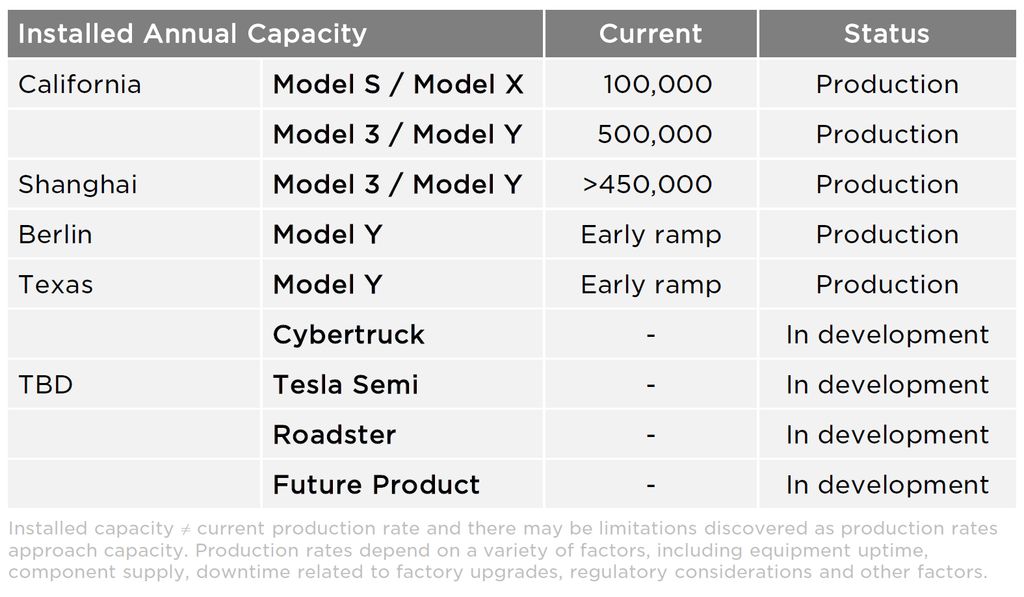 Tesla's Market Share Keeps Growing And Growing
Tesla Almost Doubled The Rate Of Supercharger Deployment In Q1 2022
By: Mark Kane
++
++
Got a tip for us? Email: tips@insideevs.com