In the U.S. and Canada, the share heads towards 3%, while in Europe and China, 2% is within range.

As in previous quarterly financial reports, Tesla has shared a graphic that illustrates its market share in three main automotive markets to highlight progress.

The results are truly impressive, as according to the industry data, the company is consistently increasing its market share, despite the volatile global situation in terms of supply chains. 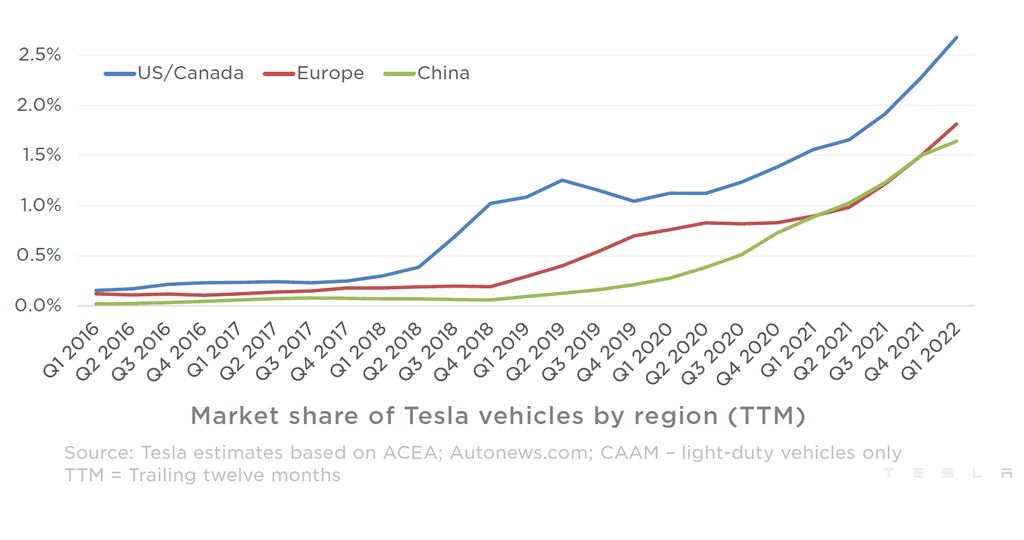 With two new manufacturing plants - in Germany and in Texas - currently ramping up Tesla Model Y production, and strong demand above manufacturing capacity, Tesla has a big chance to capture an even larger part of the global automotive pie.

It's difficult to forecast, but a market share of several percent within a year or two is definitely on the table.

Tesla's long-term target is to increase electric car sales - on average - by 50% year-over-year.

"We plan to grow our manufacturing capacity as quickly as possible. Over a multi-year horizon, we expect to achieve 50% average annual growth in vehicle deliveries. The rate of growth will depend on our equipment capacity, operational efficiency and the capacity and stability of the supply chain. Our own factories have been running below capacity for several quarters as supply chain became the main limiting factor, which is likely to continue through the rest of 2022."

The short-term focus is to scale-up production, especially in 2022. In the following years, Tesla would like to introduce new electric vehicles. That includes the Tesla Cybertruck, Tesla Semi, Tesla Roadster and an autonomous robotaxi.

The growing Tesla share in the global car market, as well as a fast expansion of other new EV manufacturers, means also that someone is losing traction - the established manufacturers, at least some of them, which are not able to maintain their position for a variety of reasons.

Tesla Almost Doubled The Rate Of Supercharger Deployment In Q1 2022
Tesla Energy Generation And Storage Business: Q1 2022 Results
By: Mark Kane
++
++
Got a tip for us? Email: tips@insideevs.com