Tesla still hopes to produce about 1.5 million cars this year and reach an annual capacity of 2 million.

Last evening, Tesla released its Q2 2022 financial results and held its quarterly conference call. The report and the call were packed with plenty of positive news, and CEO Elon Musk was even on the call, which suggested that there could have been bad news to report. However, this wasn't the case, and among the positives was Tesla's report related to production capacity growth at its global factories.

Tesla rarely shares much, and it doesn't have a PR department. This means most news surrounding the electric automaker comes from anonymous sources, employee leaks, or something Elon Musk tweeted. Oftentimes, we can only assume the validity of Tesla news, so we look very forward to the quarterly reports and calls to gather up some details backed by data.

Despite supply chain issues, factory shutdowns, and other global turmoil, Tesla continues to beat the odds. As it ramps up factories in Texas and Germany, production capacity stands to soar to new heights. The US electric automaker still hopes to produce about 1.5 million cars this year and reach an annual capacity of 2 million, and it appears the capacity projection is already almost there.

According to Tesla's recent quarterly report, the automaker's installed production capacity across the globe grew by at least 850,000 units from Q1 2022 to Q2 2022. The Fremont factory alone saw about a 10 percent increase in production capacity, adding the potential for an additional 50,000 Model 3 and Model Y vehicles. Tesla revealed that the Fremont factory just hit the 2-million vehicle production milestone recently as well. 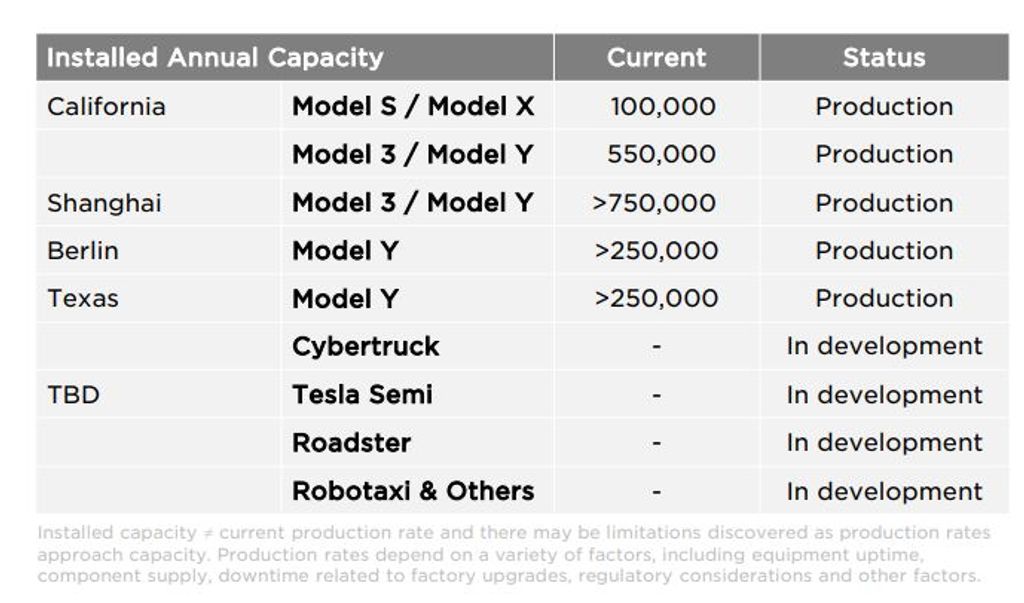 According to Electrek, Tesla's Giga Shanghai is now the most productive EV factory in the world. It saw a projected annual capacity increase from just 450,000 vehicles to a whopping 750,000 vehicles from Q1 to Q2 2022. Tesla shared via Electrek:

All in all, Tesla's report shows the current annualized capacity at around 1.9 million. As usual, we'll be publishing a much more in-depth article about Tesla's production sites by model assignment and capacity.