"We plan to grow our manufacturing capacity as quickly as possible."

Tesla, the world's largest electric car manufacturer, is ready to produce well over one million battery-electric cars per year in 2022.

The company already delivered some 0.94 million in 2021 and reports that in Q4, it achieved an annualized vehicle production run-rate of over 1.22 million.

The road from there is only up, as Tesla says that the increase in volume is the highest priority - even higher than the introduction of new products. So there will be no new EV models.

"We plan to grow our manufacturing capacity as quickly as possible."

The company entered the year 2022 with two electric car plants running at full swing (one in California and one in China) and two new plants on the cusp of production start (in Germany and in Texas).

Once approved, both of the new sites should ramp up production of the Tesla Model Y. Meanwhile, Tesla will be looking for a new location for additional EV production in the future.

The company highlights not only quick expansion, but also unprecedented profitability:

"Manufacturing is Tesla’s critical core competency. While EVs were often deemed structurally unprofitable due to expensive batteries, we were convinced that manufacturing innovation, purpose-built vehicles and factories would solve cost concerns. In Q3-2021 (the last widely reported quarter), Tesla achieved the highest operating margin across all volume OEMs. Cost (COGS) per vehicle dropped to ~$36,000 in both Q3 and Q4 2021. We believe our current projects, including large castings, structural battery pack, 4680 cells and many others, should help us continue to minimize our product cost."

Tesla said that the 2021 production results were a record high (but did not reveal the exact number), and would like to further increase to an even higher level.

"Fremont factory achieved record production in 2021. We believe there is potential to extend overall capacity beyond 600,000 per year. We aim to maximize output from our Fremont factory while ramping new factories."

According to the quarterly report, the Tesla Giga Shanghai plant has the potential to produce over 450,000 Model 3/Model Y per year (no change here). The plant remains the company's export hub.

"Production of both Model 3 and Model Y continued to ramp further throughout 2021. Local production is essential for reducing the cost per vehicle and improving the stability of the global supply chain. Gigafactory Shanghai continues to be our main export hub."

Tesla Giga Berlin, under construction in Grünheide near Berlin in Germany, is behind its initial schedule. Originally, the production was expected to start in 2021.

Currently, Tesla is waiting for final approval to start series production of the Tesla Model Y, which at the start will be powered by 2170-type cylindrical battery cells.

"Equipment testing through the vehicle production process started late 2021. We are still in the process of finalizing the manufacturing permit from local authorities, which will allow us to start delivering German-made vehicles in Europe. These first vehicles will be built using 2170 cells."

Tesla Giga Texas, under construction in Austin, Texas, is expected to start series production and customer deliveries of the Model Y this quarter (after missing the 2021 target).

The cars will be equipped with 4680-type cylindrical cells and structural battery packs.

"Builds of Model Ys started in late 2021 at Gigafactory Texas. After final certification of Austin-made Model Y, we plan to start deliveries to customers"

The launch of the Tesla Cybertruck is delayed to at least 2023. 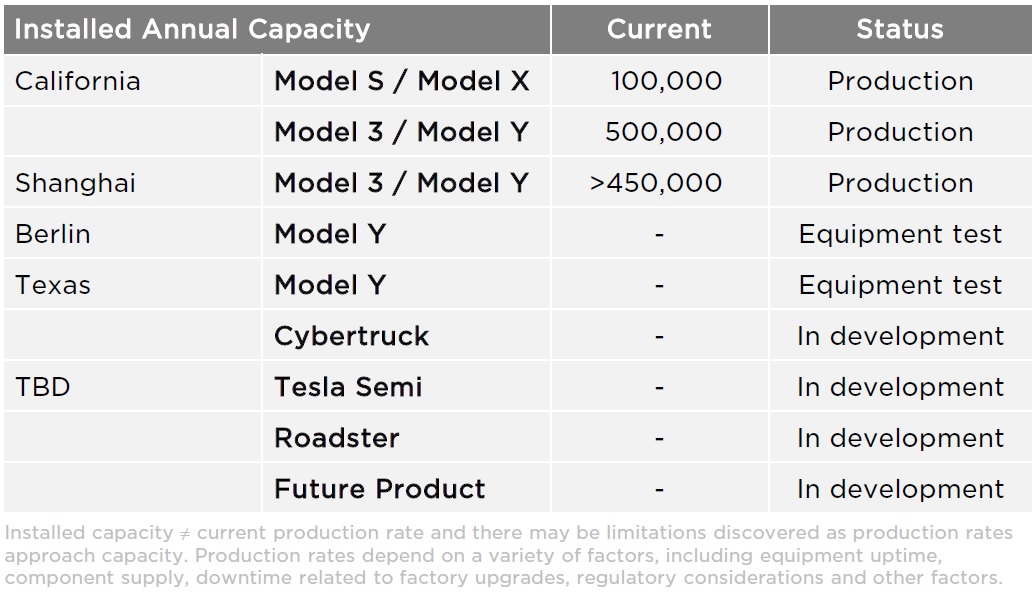 How To Identify A Tesla's Origin: Check Out The 2022 Model Year VIN Decoder
Will Tesla Sell Over 1.5 Million Electric Cars In 2022?
By: Mark Kane
++
++
Got a tip for us? Email: tips@insideevs.com