Tesla Interactive Index: Which Countries Pay The Most & Least For A Tesla?

If you're considering an EV, no matter where you live, Tesla is probably on your radar.

In just 12 short years on the road, Tesla has become a byword for electric-powered motoring. Martin Eberhard and Marc Tarpenning set out to build an electric sports car. Supercharged by the support of Elon Musk, their company created the deluxe Roadster in 2008. Following demand, the brand has developed more affordable electric cars for everyday drivers.

Nearly one in three electric cars sold around the world at the start of 2020 was a Tesla – more than Renault and Volkswagen put together. But with the new compact Volkswagen ID.3 rivaling the Renault Zoe and Nissan Leaf on the electric-on-a-budget market, is a Tesla really so affordable?

The answer: it depends where you live. The price of a Tesla varies around the world, especially when compared to local wages. So, Budget Direct has done just that – compared Tesla prices in every country where the Model S, Model 3, Model X, and Model Y are available and measured them up against the national average income. And we’ve visualized our results through a new series of maps.

Here are the results at a glance: the average price of a Tesla in every country in the world. Zoom in for more detail. Click the tabs to filter specific models of Tesla and switch between currencies.

The States remains the cheapest place to buy a Tesla, not least due to the company’s factory in Fremont, California. Parts of eastern Europe and Asia stand out as the most expensive places in the world to buy a Tesla. And by far the priciest market of all is Singapore. Cars, in general, are very expensive on the island because Singapore’s government wants to limit car usage.

Tesla will not be a special case: “What Elon Musk wants to produce is a lifestyle,” says Singapore’s environment minister, “[but] we are interested in proper solutions that will address climate problems.” In fact, electric cars are subject to heavy taxes in Singapore to ‘even up’ the benefits of lower fuel costs and discourage any type of car from the road.

The price of 4 key Tesla models around the world

While our overall results are based on an average price across the Tesla brand, some models are relatively cheap in some countries compared to others. Read on for more details on the models and their affordability. 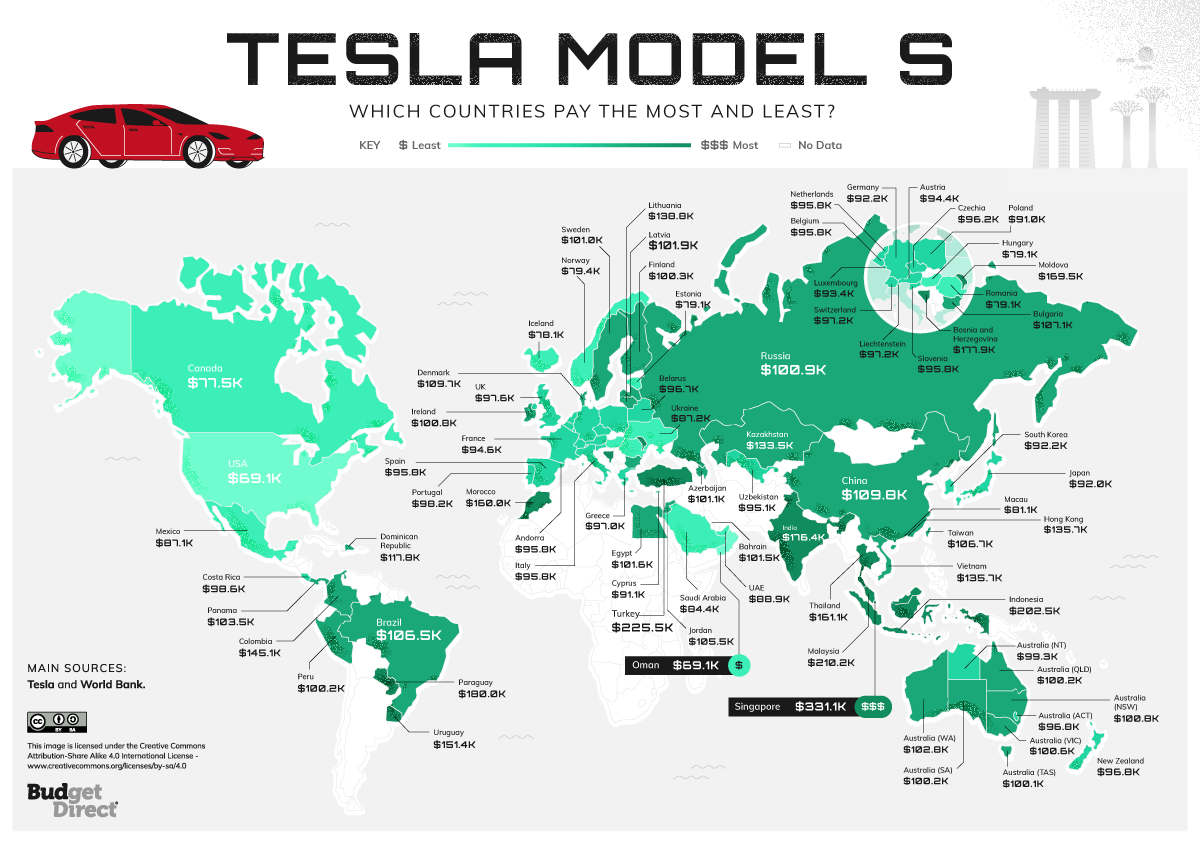 The Model S is Tesla’s first attempt at a sedan, and – more than the discontinued Roadster – has set the bar for consumer EVs. The S is renowned for its speed and James Bond-like cockpit, including the car’s (claimed) ability to drive itself to you from wherever you parked it. The cheapest new S that Budget Direct found was in Oman. At pennies over $65k, it was $4k cheaper than the American price. 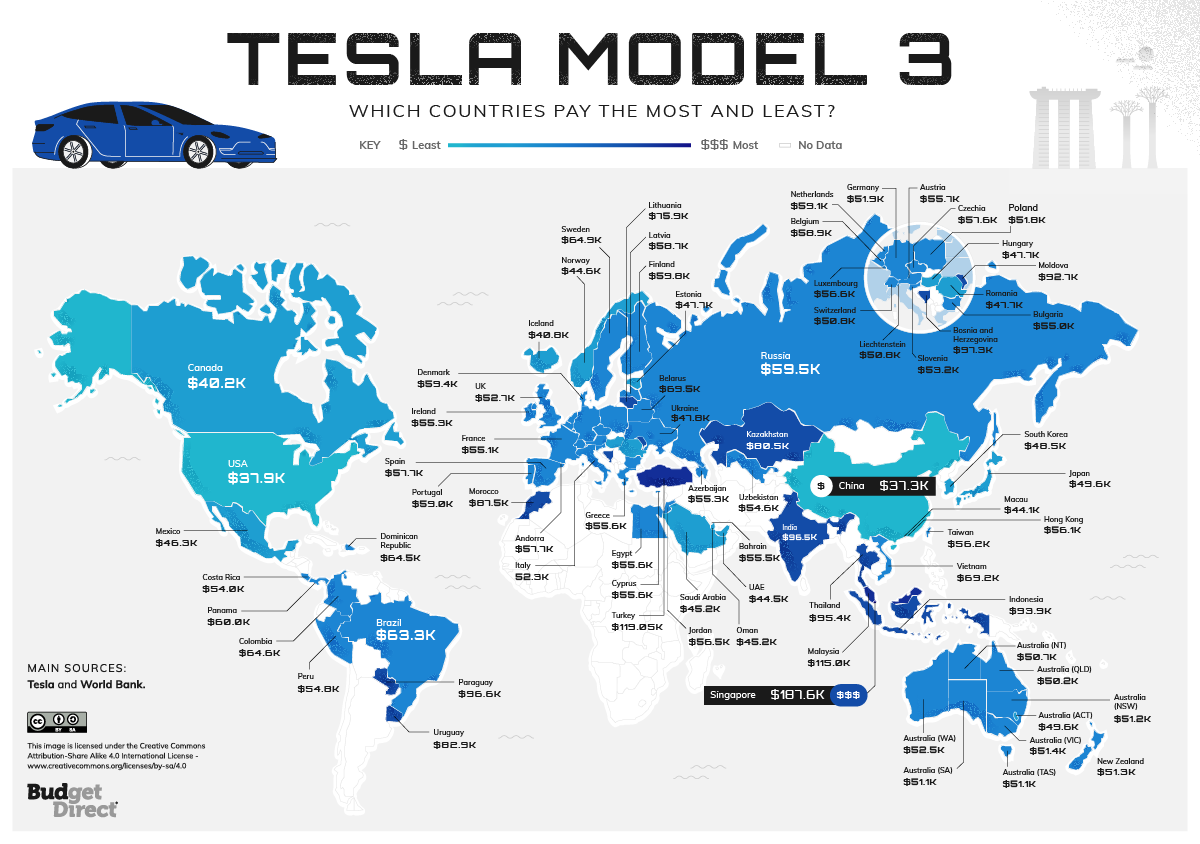 The ‘affordable’ Model 3 was announced in 2006, finally hit the market in 2017, and was the all-time top-selling EV in the world in 2018 and ‘19. Tesla streamlined the cockpit by moving most functions to a 15” screen. The smaller platform means the 3 drives like a dream. It is cheapest in China, where Tesla is trying to break the market. 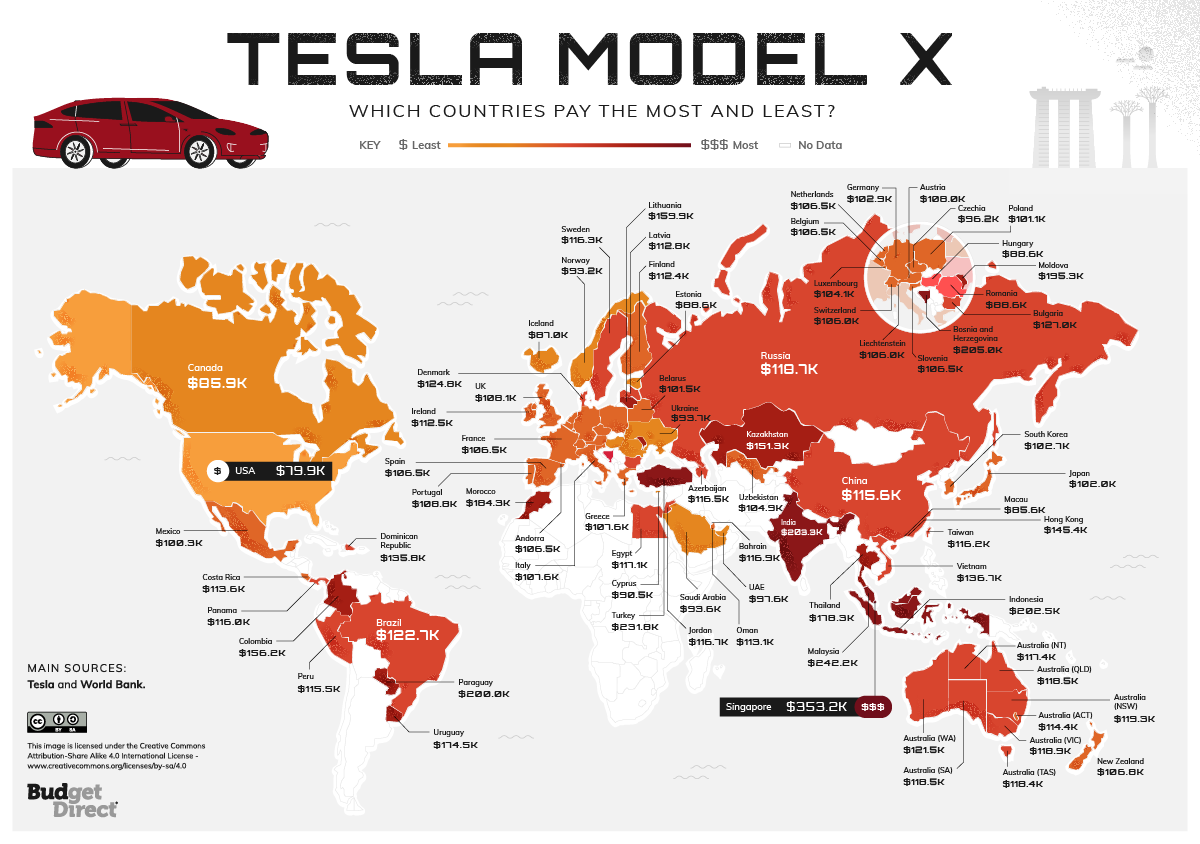 With its winged doors, the X is for sci-fi dreamers who dig a little retro-futurism. However, it is also the priciest Tesla. This luxury SUV can do 0-60 mph in 2.6 seconds, and costs a six-figure sum in all but 12 countries, being cheapest in the States, Macau, and Canada. The cost in Turkey and Malaysia approaches a quarter-million, while in Singapore the Model X is an eye-watering $350k+. 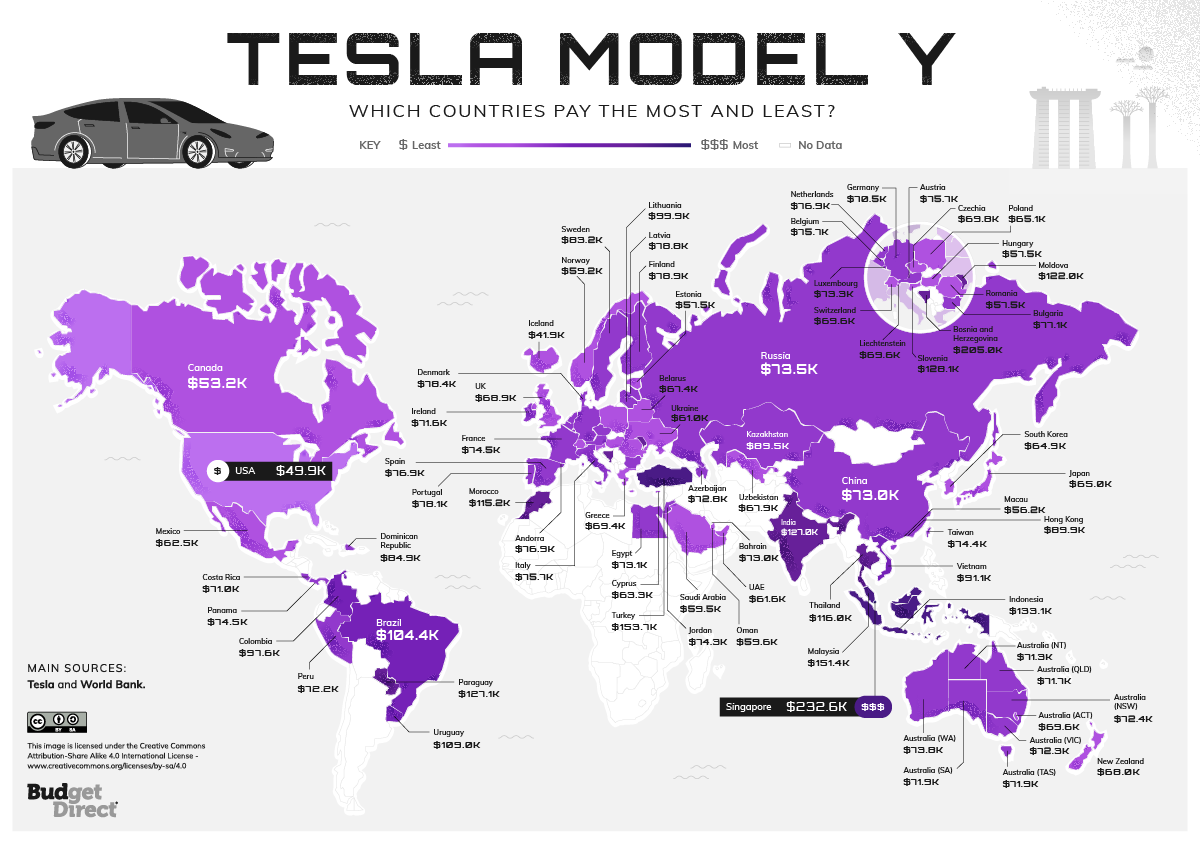 The Y sits between the 3 and the X as an affordable compact SUV. Because the Y is heated with a heat pump rather than electric resistance, it is more efficient and should maintain its range better in cold weather. The good news in the major EV markets of Norway and Iceland! The vehicle only launched at the start of 2020 and is still unavailable in many territories – Norway has the third-cheapest confirmed price ($59,243.09), but the Y tops six figures in Brazil ($104,464.87).

The price of a Tesla vs. Local wages

Wages vary more greatly than car prices, so to make sense of local affordability, it makes sense to compare average cost against average income. Each percentage represents how much of the average national annual income you’d need to spend to buy a Tesla at the local average price. 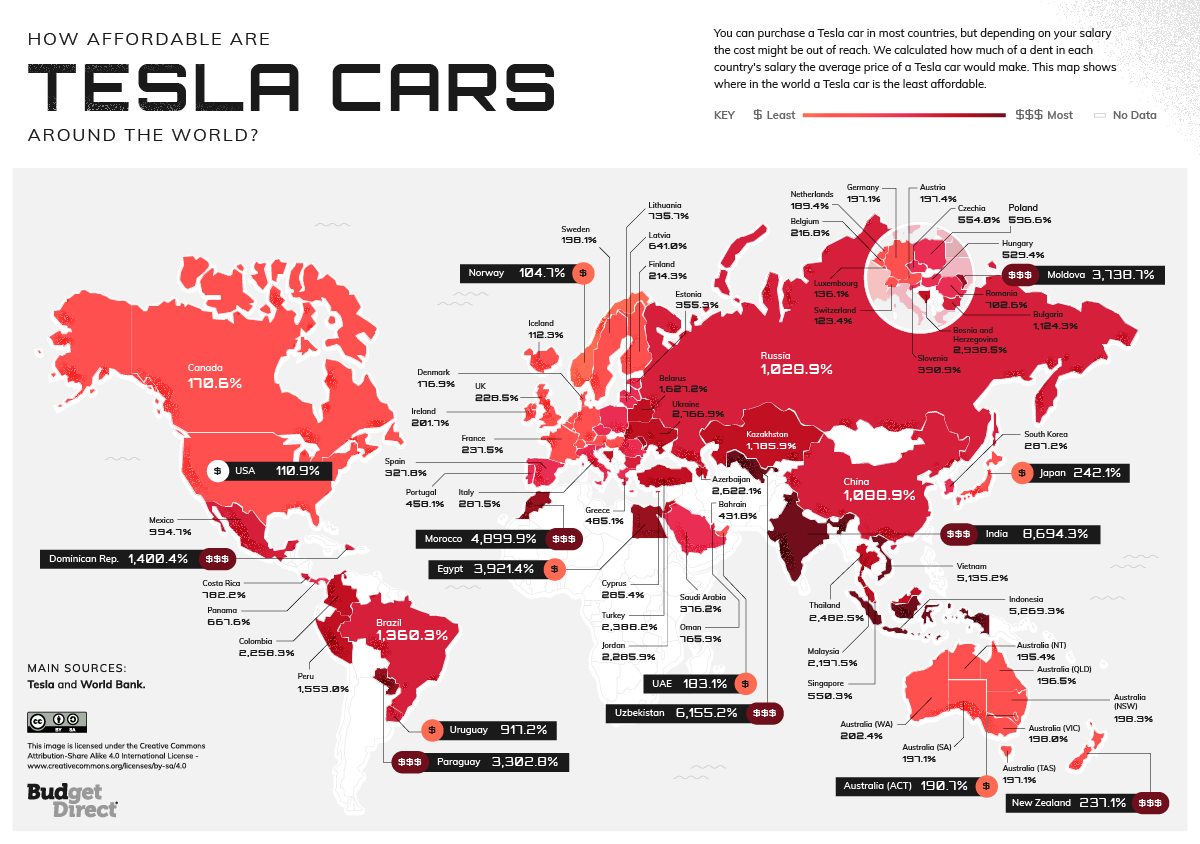 India is a tough place to be as a Tesla fanboy. It is the 7th most expensive market with the 2nd lowest income in our study. The average cost of $150,855.35 is 8694.83% times the average salary of $1,735.00. The good news is that Tesla is likely to launch officially in India in 2021, bringing prices down. The bad news is that there are just 500 charging stations in India, so you may have to walk home.

The best value can be found in Norway, where around 60% of all new car sales are electric. A phenomenally high average national salary of $66,019 looks pretty next to a very reasonable average-priced Tesla at $69,146.21. However, Volkswagen is still Norway’s most popular new buy. Neighbouring Iceland is number three for affordability (112.31%) – and Tesla has quickly become the biggest car brand in the country.

Rival EV manufacturers are producing some great cars, but there’s still nothing as cool as a Tesla on the drive if you’re planning to go battery-powered. Thankfully, Elon Musk and his engineers continue to innovate. Cheaper batteries could mean a $25k ‘fully autonomous Tesla’ hits the roads in just three years. “This has always been our dream to make an affordable electric car,” says Musk. Let’s hope the price stays reasonable whatever country you’re in!

How we collated Tesla prices:

How we calculated affordability:

This post was brought to you by Budget Direct Car Insurance

By: InsideEVs Editorial Team
Published by: Steven Loveday
++
++
Got a tip for us? Email: tips@insideevs.com