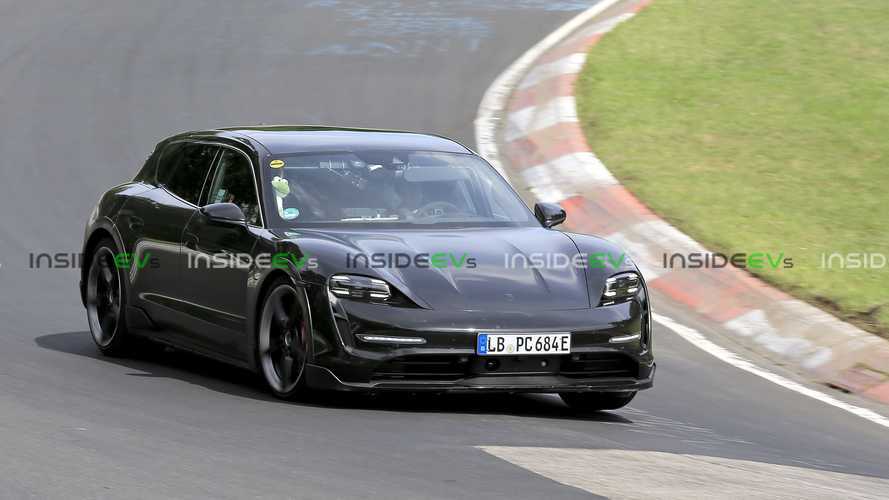 The Taycan load lugger was seen sporting minimal camouflage; only small parts of the rear end were covered.

Fans of fast wagons will soon have a very unique EV to drool over, the Porsche Taycan Cross Turismo, the load-lugging and slightly higher-riding and more rugged alternative to the sedan that is already out. Porsche didn’t go to too much trouble camouflaging the prototype while it was tested around the Nurburgring, so this is a sneak peek at the final production version of the vehicle.

The only part of the car that was camouflaged was around the rear light clusters, which appear to be identical to those used on the sedan. From the side, the shape of the roof is very reminiscent of the Panamera Sport Turismo’s, even if the Taycan does look ever so slightly lower and sleeker than its gas-burning cousin.

According to our spies, the car was being driven quite hard around the Ring, probably undergoing handling testing. We expect the Cross Turismo model to carry over the same powertrains that the sedan is available with, and even though it will be marginally heavier, performance should be nearly identical.

Top speed could theoretically be increased because in some cases, wagons have better high speed aero credentials compared to the sedan version of the same car (although, in this case, the higher ride height could make it less slippery). This principle will apply to the Sport Turismo model which doesn’t get the same crossover-like treatment complete with the higher suspension.

Everybody seems to love the Taycan

We don’t really know when the Porsche Taycan Cross Turismo is due out or whether or not it will be revealed at the same time as the Sport Turismo model. A safe bet would be to say they may be officially unveiled and added to the range sometime in 2021.