Sadly, very little information was provided about the incident.

Since Tesla performed its software updates 2019.16.1 or 2019.16.2 for the Model S and X, this matter is getting increasingly more complicated. To make matters worse, the Model S is still presenting more fire cases than it would be reasonable to expect. After one of them burst into flames in Utah, we have a new situation, apparently from Coral Gables, Florida.

We wrote “apparently” because the only information we have about where this took place is a video shared on Twitter by the Coral Gables Fire Department in which it shares very little information. 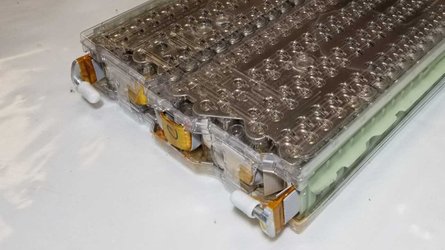 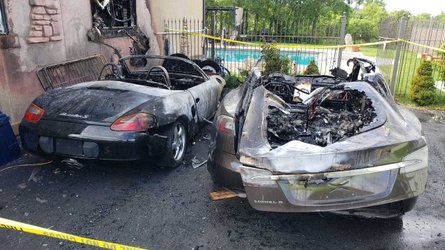 The only thing we know is that the video wanted to share the firefighters’ perspective when dealing with a vehicle fire and that the blaze is currently under investigation. We have contacted the Coral Gables Fire Department to know when and precisely where this fire took place. The video gave us little to deal with.

We can only see it is a dark, probably black Model S with a license plate that seems to be from Florida. In one of the images, we can see the fire appears to be coming mostly from underneath the rear axle, where the battery pack is.

In another take, we can see the car was charging, as the charge cord is still hanging from the charging port. Either it melted or was cut by the firefighters. The front end of the car – mostly composed of plastic parts – has wholly melted with the fire.

We also get a glimpse of the license plate. It reads PGG1G, but we cannot be sure due to the low quality of the screenshots we manage to obtain.

The fire seems to have started in a high-profile neighborhood, with particular streets, gates, and access control. That could be a good reason why we know so little about the fire.

In case you know the place or the car owner, please let us know more about the circumstances. As we mentioned, this is just another episode of a much more complicated story.

The updates we mentioned at the start of the text happened shortly after a Tesla Model S caught fire in Shanghai in April 2019. It capped the voltage of the cells, making supercharging much slower and reducing range.

On August 7, David Rasmussen decided to sue the company because he suspects it is concealing a more complex issue with these battery packs. More recently, Business Insider and Los Angeles Times said they had access to documents that confirmed a defective cooling coil provoked coolant leaks that could lead to fire but did not present them.

The latest update we received came from Jason Hughes, also known as Tesla hacker. Just like he did when Tesla was accused of SUA (Sudden Unintended Acceleration), he said any coolant leak would never be able to cause a fire.

A new fire on a Model S while we are waiting for clarification on the updates and cooling coil problems is not a good sign. Just like the Utah fire, the Coral Gables Fire Department said this blaze is under investigation.

Unfortunately, that does not mean much. Transport Canada is investigating a Hyundai Kona Electric fire since July 2019 and still reached no conclusions. According to the Canadian transportation department, “ the extensive fire damage often leaves little evidence to examine, and analysis of that evidence must be performed carefully.”

Let’s hope this is not the case for this Coral Gables fire and that the investigation leads to solid explanations on why it happened, as unlikely as it may seem.