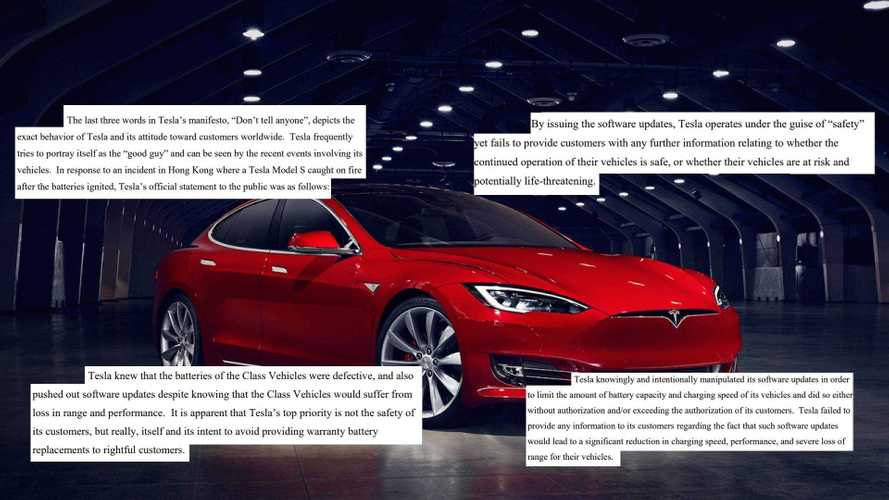 Tesla’s Master Plan Part 1 jokingly ended with “don’t tell anyone”. What was intended to be a gag became the thread for the lawsuit David Rasmussen filed last Wednesday against the EV manufacturer. His lawyer, Edward Chen, states in it that Tesla has made “not telling anyone” a bad habit. Even when it should tell, such as with its software updates 2019.16.1 or 2019.16.2 for the Model S and X.

***UPDATE: Reply from Tesla and from Rasmussen now included further down below.

We managed to get a copy of the lawsuit – which intends to have class action state, or else, to represent all people affected – and can tell you all its details. Regarding Tesla’s alleged lack of transparency, it goes even further and states the following:

“Tesla’s ability to issue over-the-air software updates is unique and, for the right reasons, may be used as a tool to benefit Tesla owners. However, the problem here is that when this ability is unchecked, unregulated, and conducted in a manner to avoid legal duties and obligations as Tesla does with its warranties, customers like Plaintiff and other members of the putative class are at the short end of the stick and are left helpless and will continue to be harmed by companies like Tesla that operate on the belief that ‘not telling anyone’ is good company policy.”

The so-called “causes of action” are violations of the following laws, according to the document:

2 - Magnuson-Moss Warranty Act, since Tesla does not want to repair the Model S and X to their prior conditions before the update.

4 - California’s Unfair Competition Law based on this:

“By offering software updates 2019.16.1 and 2019.16.2 to Plaintiff and the other putative class members, Tesla disrupted or caused the disruption of vehicle capabilities when it improperly and unlawfully throttled the batteries of the vehicles and manipulated the calculations and coding for the BMS of the Class Vehicles. Plaintiff and the putative class members did not consent to having their battery capacities and charging capabilities throttled, and had they known that the software updates would result in the significant decrease in rated mileage range and usable battery capacity in their vehicles, they would not have installed the software updates.”

7 - California’s False Advertisement Law, because the update would not have anything to do with safety, but rather with not paying new battery packs.

8 - Trespass to chattels, based on Californian laws, as are the following ones.

12 - Breach of the duty of good faith and fair dealing.

13 - Money had and received, meaning that Tesla received for the warranty it offers.

Among all the arguments presented in 100 pages, Chen also highlights all spontaneous fires involving a Model S – linking that possibility with the update – and how much Rasmussen tried to get things amicably settled with Tesla. He bought his 2014 Model S 85 from another owner and has since put more than 100,000 mi on the clock.

All the trouble started on May 16, 2019, after Rasmussen allowed the car to perform the  2019.16.1.1 update. Ever since, he claims to have lost 29 mi of range and 8 kWh of battery capacity. "I am a Tesla supporter. I truly believe that Tesla will do the right thing and make us whole again. I just can't sit by patiently for more time for them to fix things. It has been 12 weeks since 2019.16.1.1 and 7 software updates have been installed on my car with no apparent effect to this issue," Rasmussen told InsideEVs.

"I regret that it took this action to get them to do anything. Tesla's communication has been horrible and insulting when it wasn't just complete silence. I believe this action might make Tesla take another look at their policies and make positive changes."

And Rasmussen has given it a try. He has asked Tesla for assistance on June 10, June 17, June 20, and July 2. He asked that his car’s battery pack was tested but claims never to have received the results of the tests. Tesla would have informed them just orally.

Rasmussen would even have given up a paid test, a Charge Amperage Capacity (CAC) test, at the cost of $253.50, because he was told the results “would only be shared verbally and no printed copy of the results or otherwise recording on the results would not be allowed.”

This was the result, according to the lawsuit:

Still, according to the lawsuit, Tesla would have said the losses the car suffered were insignificant in value. Chen points Tesla charges up to $10,000 to offer 10 kWh more of battery capacity at the moment of car purchasing. Clearly contradictory approaches to the same subject.

Rasmussen claims he takes now more time to recharge his car and that, due to his long commutes, he is no longer able to use it properly.

Before asking that the case is decided by a jury, Chen details the purpose of the lawsuit: the request for relief:

"Plaintiff seeks, at his election and for that of the putative class members: replacement batteries for the Class Vehicles, return of the money premiums that were paid for cars that were supposedly capable of achieving the rated miles as Tesla represented, calculated at a certain dollar per kilowatt-hour (kWh), refunds to consumers that paid extra for what they should have received, to begin with, and any other relief available to Plaintiff and the proposed classes. Plaintiff also seeks punitive and exemplary damages for Tesla’s knowing fraud and unfair business practices, including illicit use of software updates to avoid the legal obligations and duties owed to Plaintiff, the proposed classes, and consumers nationwide."

Just like we assumed before, Rasmussen believes this could have been dealt with in a totally different way. "Tesla could have been open with those of us affected. I believe they know exactly how many and exactly who has been so affected. Had they sent a message to us that our cars are affected and they are working on a solution while identifying what the problem is (especially if it is related to spontaneous combustion of our cars)."

While he has no idea how many people will be represented if his lawsuit gets class action state, Rasmussen has some estimates. "I believe there are about 40 affected in the US based on that thread (at the TMC forum) and I have seen data from Germany identifying an addition of around 20. I assume not everyone affected is on the forum and others are just not aware that they have been so affected. If you display your range by percent rather than miles (or km) it is much more difficult to detect. You just see you have to charge more frequently."

Rasmussen would even accept if the problem was treated as a service bulletin. "Even if they had waited for those of us to come into a service center and informed us at that time that this is a known issue that they are working on would be acceptable. I and all of us others would have been ecstatic about how Tesla would be treating us and we would have been touting them even more strongly than before."

The now unhappy Tesla owner says he had no other option but to sue. "Personally, I was the first Tesla owner at my company of about 85 employees. Since my ownership and praise of my car, four more have been purchased (one certified pre-owned Model S P85 and three Model 3 units). Now, with this lawsuit, they are all supportive of me and cautiously optimistic for my positive outcome. Or they will be questioning their decision."

We asked Tesla to manifest on the lawsuit and here is the company's reply:

“Delivering the best possible customer experience with the highest regard for safety has always been our priority, and we do not disregard either of these things as this complaint suggests. A very small percentage of owners of older Model S and Model X vehicles may have noticed a small reduction in range when charging to a maximum state of charge following a software update designed to improve battery longevity. As previously noted, we have been working to mitigate the impact on range for these owners and have been rolling out over-the-air updates to address this issue since last week.”

We have submitted it to Rasmussen for comment. Here's what he has to say about it:

They say this will improve longevity and that may be true.

But they now have reduced my range 3x more than I have after nearly 5 years in a matter of a few weeks and my battery is only charging to 80% of its old capacity, typically. Yeah, that might extend its life... but I now have essentially 15 years of degradation due to software (assuming a linear degradation slope).

It seems we'll have a long way until the judge – or the jury – has something to say about all this...