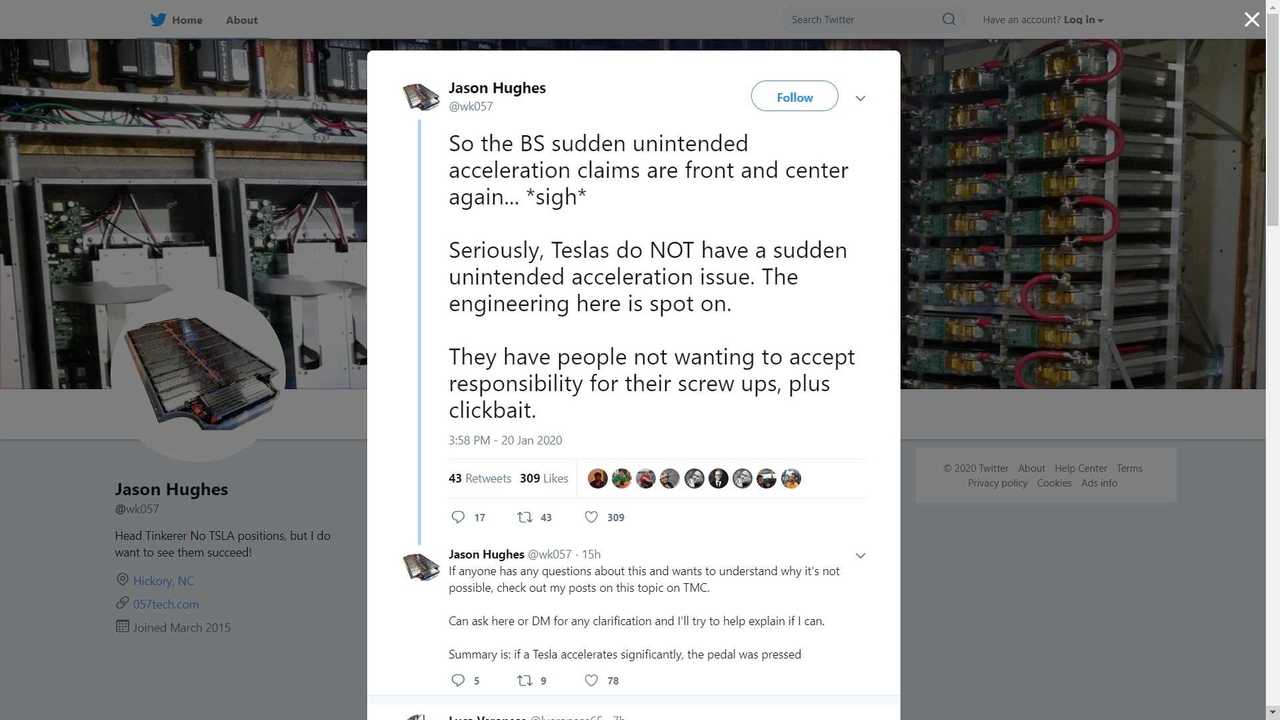 “Tesla hacker” says the company “did their homework on the hardware and software side very well” to avoid this.

Jason Hughes is definitely not a person you would classify as a Tesla guardian. He has helped us clarify the MCUv1 issues on the early cars of the company and is known for admonishing Tesla. When Hughes heard about the petition to investigate SUA – Sudden Unintended Acceleration – on Tesla vehicles, the image above is what he had to say on Twitter about the matter. Summing up, as Tesla said, he also deems it impossible.

We got in touch with him to understand his position, and this is what he had to say:

“I've done hardware and software design/engineering for nearly two decades. For clarification, I don't look at what are officially considered ‘EDRs.’  I decode the proprietary logging format Tesla uses, which contains far more information than is available from the SRS EDR data. However, there's no report or anything. It's raw data. For the majority of the cases I've examined, I've agreed not to share the data publicly. For the few without an explicit agreement, some discretion is at least implied.

To that end, I've examined logs from 29 accident vehicles to date, 19 of which were third-party unintended acceleration related – several for direct customers, over a dozen for a particular insurance company.  One hundred percent of them were pedal misapplication. The driver was pressing the accelerator pedal commanding the acceleration, and then in most cases, eventually braked and stopped the car. In two cases, the driver actually never touched the brake, but the obstacle or airbag deployment prevented further movement of the vehicle.”

Tesla Denies Unintended Acceleration: Check Who Made The Petition
⠀

Hughes explains why he came to such conclusions.

“The drive units contain at least three distinct pieces of hardware that all simultaneously crosscheck any pedal input. The pedal hardware itself contains two independent sensors that must agree as well. This way, only a genuine pedal input will cause torque to be commanded. There are additional crosschecks of this in other modules as well, such as the ABS.

While Tesla is far from perfect, the powertrain control setup, specifically related to these sudden acceleration claims, is something they deserve a lot of credit on. It's a solid system, with a ton of thought put into how to make it as safe as possible. There's plenty of things to call out where Tesla has done something outright stupid, or dare I say it unethical, over the years... But this just isn't one of them. They've done this right.”

Although Autopilot was not involved in most cases, Hughes mentions any interference it could have.

“The autopilot system has a method for commanding acceleration/deceleration without pedal input. However, these commands are in the form of ‘I'd like to be going this speed, and I'd like to get to that speed at X rate.’ X, in this case, is quite lethargic when it comes to acceleration. For deceleration – as in, emergency braking – there is no limit. But for acceleration, the limits are quite sane.  Even at maximum possible digital command, no one would consider this acceleration ‘sudden.’ If the autopilot system attempts to command acceleration beyond these hard limits, one or more of no less than six different systems will step in and intervene to disable the system entirely.”

If the brakes were “by-wire,” would there be a chance of interference? In the realm of possibilities, that would be another one. When it comes to factual scenarios, it is not, according to Hughes.

“The brakes on the Tesla are standard hydraulic brakes. The same as used in millions of vehicles worldwide. Regardless of any acceleration commanded, the brakes are capable of overpowering the powertrain – even on a P100D – at least two-fold. If you mash the brakes, the car is not going to be accelerating. It’s physically impossible. Anyone claiming, ‘I was pressing the brake the whole time, and the car still leaped forward!’ is flat out lying.”

That is why Hughes is so emphatic regarding unintended acceleration being impossible in any Tesla.

“Trust me: I spent an unreasonable amount of time trying to make a Tesla do a drag strip run without a human driver. It's impossible without pretty complex external hardware. No system issue is capable of causing rapid acceleration without the driver commanding it via a working accelerator pedal.”

He even makes a challenge about that:

“Go ahead. Try it. Hop in a Tesla, hold the brake pedal and mash the accelerator to the floor.  I guarantee you won’t get far, if anywhere. Heck, come to my place, and I'll disable the brake sensors, and you can try the same. It won't work. The brakes will slow the vehicle in all conditions. They're an independent system. So even if some mythical gremlin decided to get into the powertrain and command full acceleration, and you press the brake, you're not going anywhere.

I don't offer any official services on this anymore, as it's always just a waste of time. Instead, I have an open bet for anyone who brings me a real sudden unintended acceleration accident vehicle. If I decode the logs right in front of them, and if they show acceleration while the brake is pressed and the accelerator pedal is not pressed, I'll pay up. If not, they pay up. Simple as that.”

Regarding Brian Sparks' allegation that Tesla vehicles must have a design flaw to prompt so many sudden unintended acceleration incidents, Hughes has a feasible explanation.

“I think the argument that pedal misapplication issues are exaggerated a bit in higher power vehicles is a bit valid, not that it backs up the SUA claims. In a vehicle with a lot of power, you have less time to react to such a mistake for sure. And Teslas are not slow cars. So I'd think they would fall into that category, not limited to Tesla. This doesn't mean Teslas or other high power vehicles have an issue that makes them susceptible to SUA. It just means that should a driver screw up and press the wrong pedal, they may have less time to realize the error in a Tesla or other high-performance vehicle than say, a Hyundai Elantra. But it's true: all vehicles are capable of pedal misapplication. It is the driver, after all, that controls and commands the vehicle. It's not the vehicle's fault if those driver inputs are not what was intended.”