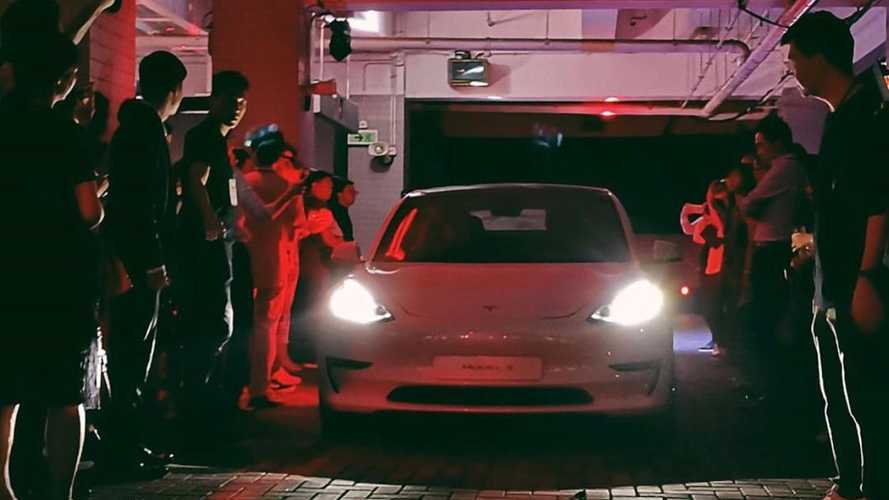 Folks in Hong Kong have been waiting years for this day.

It has been more than two years ago since I attended the last Tesla delivery event for the Model X. Like many of the earlier events, it continues to draw crowds of local fans (many are new) and EV enthusiasts.

The event was held at Hyatt Regency Hotel in Shatin New Territories. This particular location was chosen because Tesla also showed off the newly completed Supercharger station, which is the largest in the Asia Pacific region. It consists of 20 stalls each equipped with both Type2/CCS2 cables to support Model 3 and current Model S & X. Owners can gain access to the Supercharger after the event by entering into the Hyatt guest parking area for USD3.4/hr on top of the USD0.40/kWh fee for vehicles without free charging.

A total of 10 excited Model 3 owners who had lined up at the Tesla stores to make reservations more than three years ago finally get to drive them home. All 10 were Model 3 Performance variants in white, red and grey. Unfortunately, the white interior option wasn't available yet when these owners finalized the configuration, so all of the Teslas came with black interior. However, a Model 3 manufactured at in Gigafactory 3 was showcased at a Shanghai AI conference on the same date. Still, all units delivered at the event were shipped from California to Hong Kong.

This event has proven many firsts for Tesla Hong Kong as it is the first time all models have ever been sold in the city under a single roof, the release of the first Tesla model for a mass-market audience in the city, and the first launch of the largest Supercharger station in Asia. Now, the city has up to 24 locations totaling 130 stalls to serve its customers.

Since the last delivery event of the Model X back in early 2017, other manufacturers have launched competitive or upgraded models (e.g. Renault ZOE, Nissan LEAF, VW e-Golf, Kia Niro...etc) with attractive pricing and practical range for the local market. With the Model 3, Tesla will need to prove once again that its product provides better value than ICE vehicles and other EV competitors. One thing is for sure, its tightly integrated Supercharging network in the city is still far ahead of the competition.