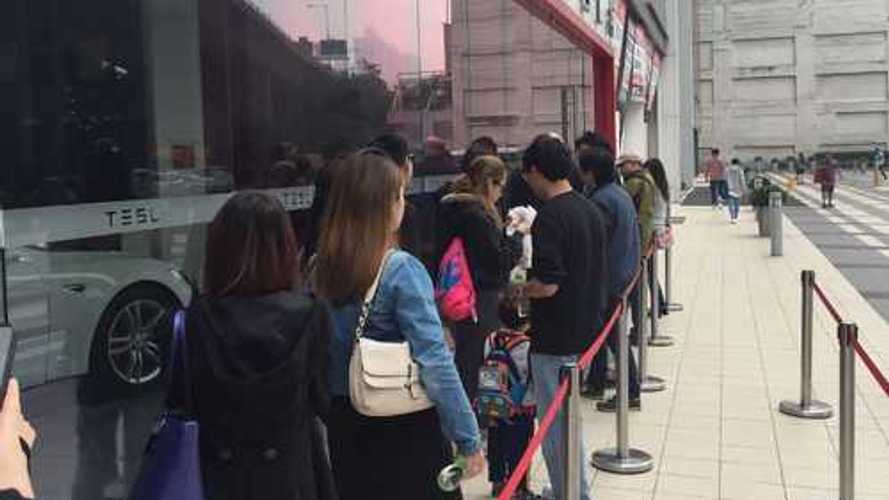 Large crowd continues to build up after the store opens.

Hong Kong people are no strangers to any kind of queues from restaurants queues, limited edition bank notes queues, iPhones release queues, luxury handbags queues or queues to just purchase a multi-million dollar homes; but the Tesla Model 3 event was a very first for city, or possibly the world, that saw customers line up to buy a car they have never even seen.

Tesla fans and EV enthusiast storm to one of the three Tesla stores in the city on March 31st. Hong Kong was the third location to take in store order just behind Japan and Australia. Before the stores opened at 10am to take walk-in reservations, the queue had reached 40 to 60 people at each store. Surprisingly many in the queues are first time buyers.

ChargedHK chairman Mark Webb-Johnson who arrived at Tesla's main showroom an hour before opening managed to get into the fifth position, and he was surprised to learn that the four people ahead of him are all first time buyers from Tesla (which in turn makes his reservation pushed to the front of the line, as he already owns a Roadster, Model S and is awaiting for his Model X delivery, which gives him some priority for the Model 3).

With his collection of RS3X models, he will become the Really SEXY man once he gets his hands on the Y (Tesla's name for a future crossover based on the Model 3) whenever it is release.

Current owners are just as excited to see the Model 3 launch as current owners, but at the same time have great concerns with the  charging infrastrucuture when the cars arrives.

At the end of January 2016 there are about 4000+ EVs registered in the city, with more than 70% of those being a Tesla. Those surging numbers have put great pressure on the existing 10 SuperCharging locations (which many owners  are forced to rely on as destination chargers) causing long queues during busy hours.

We hope to see more EVs on the road, but charging facilities must match the demand to provide a great user experience in the future.

The first new buyers arrived very early at the Tesla store hoping to get their orders in for priority deliver, despite not already being owners