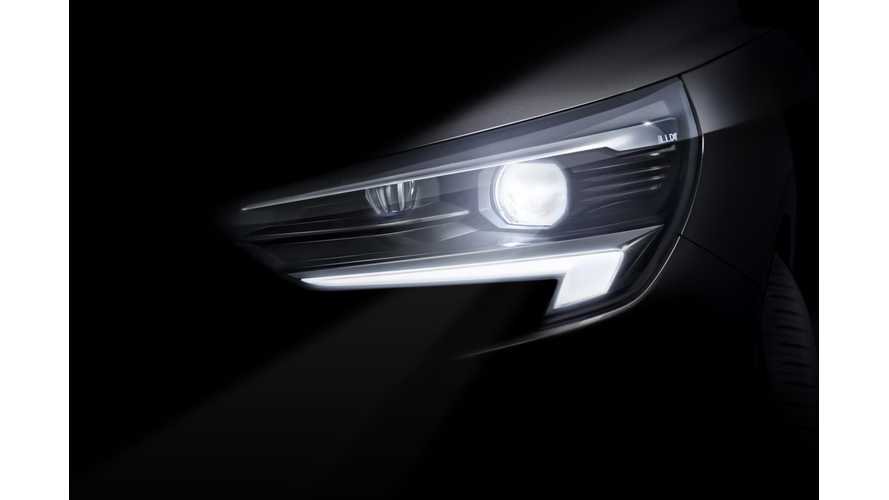 Opel and its British subsidiary Vauxhall (all part of the PSA Group) released today a teaser image of the all-new Corsa subcompact, which in Europe has been available since 1982. So far, more than 13.5 million Corsa were sold.

Soon, Opel will introduce the 6th generation of the model (4th generation in the case of Vauxhall), which will be available for the very first time in an all-electric version.

The teaser present IntelliLux LED matrix headlights (more on that in the press release below).

Opel said that by 2024 all offered passenger models will have some kind of an electrified version. The first four new plug-ins (under PSA Group ownership) are to be introduced by 2020.

By the first half of this year, Opel will open the order books for the electric Corsa and Grandland X PHEV. The German manufacturer said that the pricing will be competitive.

"Opel will already open the order books for two new electrified models in the first half of 2019 – for the battery electric version of the next Corsa, and for the Grandland X SUV as plug-in hybrid electric vehicle. “Opel is going electric!” said Opel CEO, Michael Lohscheller. “That is what we announced at the presentation of our PACE! strategic plan in November 2017, and now we are delivering.”

The Corsa in particular will give Opel additional impetus this year. The bestseller, the first generation of which made its world premiere 37 years ago, will be available for the first time with a purely electric variant. Lohscheller promises that the pricing will be competitive: “With the new Corsa we will make electric mobility accessible to many customers – it will be a real electric car for the people.”"

More about the 6th generation Corsa:

"Opel will this year launch the sixth generation of the Corsa. Starting with the first model in 1982, the Corsa has now recorded sales of more than 13.5 million units. The next generation will bring a revolution in lighting to small cars: the multiple award-winning IntelliLux LED® matrix lighting technology. The newly developed Corsa will feature for the first time the adaptive, glare-free full-LED headlight system that has impressed experts and customers since its introduction on the current Opel Astra (European Car Of The Year 2016). Following their arrival in the compact class, matrix headlights (which are usually found only on expensive premium cars) will therefore appear for the first time in the very popular mainstream B market segment – the biggest in Europe. Another demonstration of the democratisation of technology from Opel – the exciting, approachable, German brand.

“We are celebrating 120 years of automobile production this year and therefore 120 years full of innovations for everyone”, said Opel CEO, Michael Lohscheller. “We have always made top technologies accessible to all. That is our mission and our motivation and it applies especially to a model that is as popular as the Opel Corsa. We will therefore equip the next generation of our bestseller with the best lighting technology – IntelliLux LED® matrix headlights.”

Customers and experts are already enthusiastic about the IntelliLux LED® matrix lighting technology in the Opel Insignia flagship and Astra compact cars: in Europe, 20 per cent of Astra drivers and 60 per cent of Insignia customers order this innovative system. Around 90,000 new Opel cars equipped with matrix technology thus enter the European market per year. The glare-free matrix headlights automatically and continuously adapt to the prevailing traffic situation and surroundings. Approaching traffic and preceding vehicles are simply “cut out” of the illuminated area. Glare is minimised and drivers enjoy optimum visibility - as will soon be the case with the new-generation Opel Corsa."