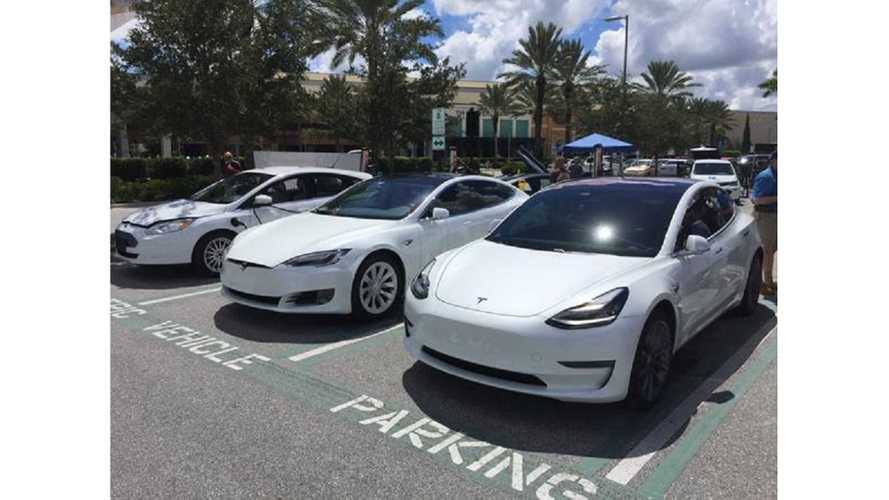 ELECTRIC VEHICLES WILL KILL THE GAS CAR — HERE’S WHY

Are the days of the gas guzzler numbered? Tom Raftery (via Forbes) says there are "seven reasons why the internal combustion engine is a dead man walking." He explains, "Electric cars are the future. The transition has just begun, but the move from ICE vehicles to electric will happen sooner and more quickly than most people suspect." Here's why...

Top 10 Best-Selling Electric Cars In The U.S. For 2018: August Edition

In the world's largest car market, Raftery notes that "China has passed a law which requires any vehicle maker to obtain a new energy vehicle score of at least 10% by 2019, which rises to 12% by 2020, and on up to 20% of sales by 2025. As a result of this announcement, all the major OEM's have suddenly found EV religion." Tesla, already ahead of the curve, signed an agreement with Shanghai Municipal People’s Government to build its first Gigafactory outside of the United States in China.

2. BATTERY COSTS CONTINUE TO GO DOWN

Raftery notes, "Lithium-ion batteries cost $1,000 per kWh in 2010. By 2017 that cost had fallen to $200 per kWh, and it won't stop there. At the Tesla shareholder meeting on June 5th of this year, Elon Musk stated that Tesla would be at $100 per kWh within 2 years. $100 per kWh is widely agreed to be the figure where EVs and ICE vehicles will have a comparable upfront purchase price. So, by 2020 the cost of batteries will have fallen 90% in 10 years, and the price will continue to drop."

3. BATTERY CAPACITY CONTINUES TO GO UP

Range anxiety is quickly fading away. Raftery explains, "Lithium-ion batteries are increasing in energy density at a rate of 5-8% per annum.... the Tesla Roadster, which launches in 2020, has a stated range of 1,000km. When electric vehicles have a range of 1,000km, it is the ICE vehicles which start to have a range problem." Just a quick glance at the range of today's electric vehicles show this trend clearly — if others continue to follow the leader (aka Tesla), range should continue to steadily improve.

Above: Looking at the EPA-rated all-electric range of 2018/2019 electric cars (Source: InsideEVs)

It's reported that "Contrary to what many believe, the batteries in electric vehicles don't degrade over time (or over miles/kilometers driven either). This is a graph of the battery capacity of Tesla Model S/X vehicles, and it shows that after driving 270,000km (roughly 168,000 miles), the batteries still had 91% of their original capacity... the bottom line is that the batteries lose about 1% of capacity every 30,000km (18,750 miles). This means that the upfront cost of an electric vehicle can be depreciated over a far longer time lowering the vehicle's total cost of ownership significantly - EVs will just keep on working. Having said that, this data is specific to Tesla batteries - we will have to wait to see how other manufacturers fare."

And, don't forget: "Another factor in favor of electric vehicles is that they are far more reliable. The drivetrain in an ICE vehicle contains 2,000+ moving parts typically, whereas the drivetrain in an EV contains around 20. A quick scan of the top 10 cars repairs of 2015 is telling. Only one of these faults can happen to an electric vehicle (number 4, and it is by far the cheapest to fix)." It makes you wonder what would happen if an EV driver was forced to go back to a gas car.

6. ELECTRIC CARS ARE CHEAPER TO "FUEL"

According to Raftery, "Electric vehicles are typically significantly cheaper to fuel as well (unless you happen to live somewhere that has particularly cheap petrol and extremely expensive electricity). And with the price of oil going up 50% in the last 12 months, finding somewhere with cheap petrol will become increasingly difficult." For reference, check out the data from the top five US cities where it happens to be the least expensive to drive an electric car based (primarily) on lower electricity rates.

Already electric vehicles and hybrids have become the fastest selling used cars (see below). As this trend continues, Raftery forecasts that, "the resale value of ICE automobiles is going to collapse... why would you buy one today? Think about that for a second. Why would you buy an Internal Combustion Engine vehicle today, if its resale value in 3-4 years will have fallen significantly? You wouldn't. And when people start to realize that, the market will flip. And it will happen quickly. Sooner than most people think. Will your next car be an EV?"

These seven factors point to an automotive future with no emissions. And, there's even a "growing list of cities  that are passing legislation to ban diesel engined vehicles from driving on their streets" further encouraging the uptake of clean cars. Raftery concludes, "when electric vehicles start to become more common, drivers of internal combustion engine vehicles will be thought of the way smokers are regarded today."