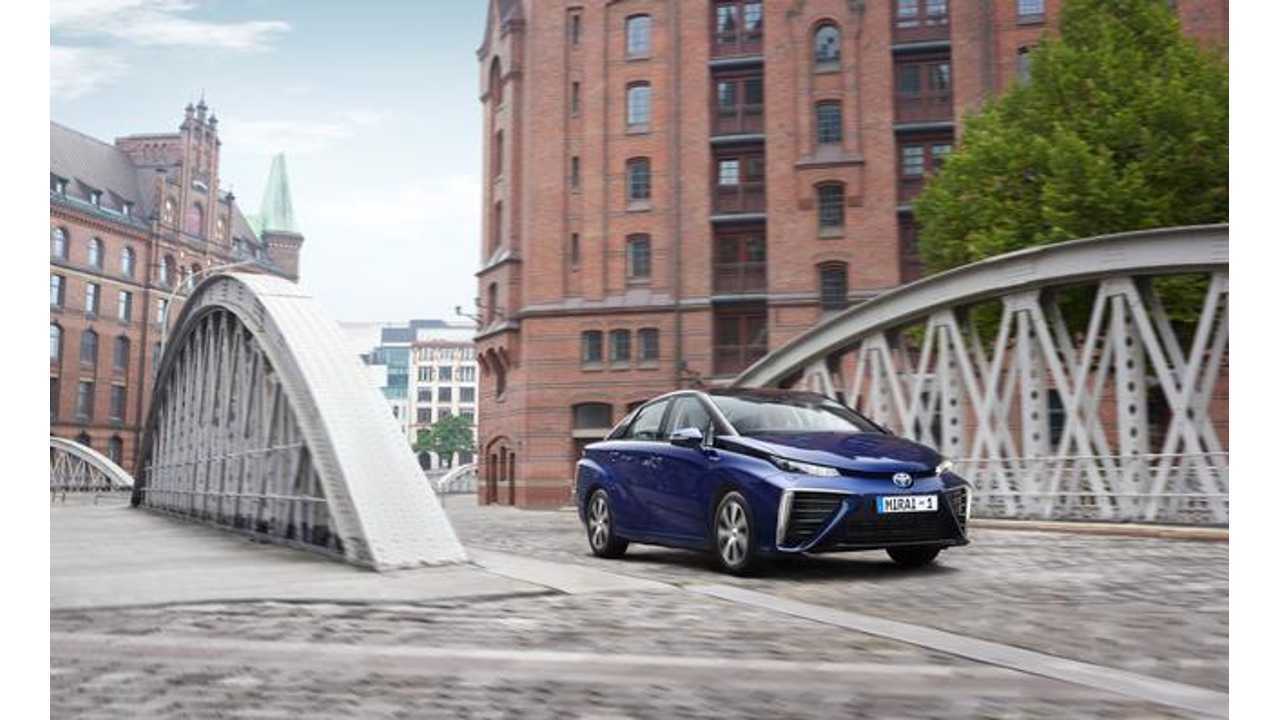 Toyota renews its push for hydrogen fuel-cell vehicles, despite some fairly anemic sales and being keen on the fact that -- as Tesla's Elon Musk asserts -- the technology is "incredibly dumb".

“Elon Musk is right - it’s better to charge the electric car directly by plugging in."

Toyota has sold ~2,400 Mirais in the U.S. since it arrived on our shores in October of 2015. Globally, sales sit at about 4,300. More Tesla Model S' were sold in the U.S. in September than Mirais across the globe in over two years (make that two consecutive Septembers, actually). Compare the Mirai's sales figures to that of the Toyota Prius, which has sold about 4 million copies globally thus far. The Prius Prime (PHEV), which is a global leader for EV sales, hit 16,682 copies sold in the U.S. as of this October.

To say that Elon Musk's Model 3 is exponentially more popular than the Mirai would be an egregious understatement, but Tesla still struggles to produce it in quantity

Nonetheless, Toyota is standing behind fuel-cell technology. The automaker believes that even though EVs are better, there's still a place in the market for FCVs.

“We don’t really see an adversary ‘zero-sum’ relationship between the EV (electric vehicle) and the hydrogen car. We’re not about to give up on hydrogen electric fuel-cell technology at all.”

The automaker believes that in order to phase out ICE cars, both future technologies are needed. Uchiyamada again made it clear that Toyota is not against EVs and is investing in both platforms, as well as moving forward with solid-state lithium-ion batteries.

The only advantage of FCVs over plug-ins is charging time. However, without any refueling infrastructure outside of a few areas, this hardly helps. Automakers are working on technology to assure that EVs will enjoy much faster charging times in the near future, which will leave the FCV platform without a single advantage over EVs* (at least to consumers). Not to mention the fact the Mirai dials at some ~$60,000, compared to the Prius Prime's ~$27,000 starting price. Although Toyota is trying to entice buyers with generous lease offers.

"A fuel cell car’s practical range usually dips to 65-70 percent of its “sticker” range - 650 km for the Mirai - because drivers often use air-conditioning and accelerate with abandon."

Tanaka explained that the goal is to raise the car's "practical range" to about 500 km (310 miles) due to the lack of charging infrastructure. As part of a joint effort with Nissan in Japan, the companies have built a network of 91 total hydrogen refueling stations, which is hardly enough to make the vehicles practical, regardless of range.

Editor's Note:  Because the obvious backstory is not being brought forward by Toyota, we'd like to take a moment to comment on the other and likely main reason the Toyota Mirai is still a "thing" in the US over a fully-electric option from the company.

A 300 mile FCV nets NINE California ZEV credits per sale - worth up to $5,000 a pop (~45k total) in avoided compliance charges, or these credit can be sold for cash to other non compliant OEMS.  Not only that, these credits can "travel" outside of California to be used in other "CARB states", avoiding the need to make zero emission sales outside of the state...which is unlike ~200+ miles EVs, that for 2018 on, only net 4 credits, and credits can't be transferred to other states.

Additionally, the development of fuel cell technology and its production is still well incentivized in Toyota's domestic market.  Then part of that end local result, in the form of the Japan-build Mirai, is then exported to the US to pick up the additional compliance bonus.

The Toyota Prius Prime (PHEV) is as electric as it gets for the automaker for the time being and it's selling quite well. It's proof that EVs would be a much better direction for Toyota. Oh well ...

Toyota is also focusing its FCV efforts on China. According to Reuters:

Added to all of this, Toyota is attempting to get other automakers on board with hydrogen fuel-cell technology. The company started the Hydrogen Council with the help of Air Liquide. The group already has representation from 27 companies, including the likes of Audi, BMW, Daimler, Honda, Hyundai, Shell, and Total. The council asserts (via Reuters):

"electricity supplies can be limited and unstable in high demand. That’s because power grids have small buffers as electricity cannot be stored easily and transported. Large-scale adoption of hydrogen can solve that issue, said Toyota’s Uchiyamada, who is also co-chair of the Hydrogen Council.

No matter how you look at it -- and even Toyota agrees -- EVs are the better way to go by leaps and bounds, and people are actually buying them! However, the automaker is compelled to push forward with FCVs due to early investments (and ZEV credits). We can only hope that whatever investments it's making into EVs and battery technology pays off, and produce results in the near future, as well.