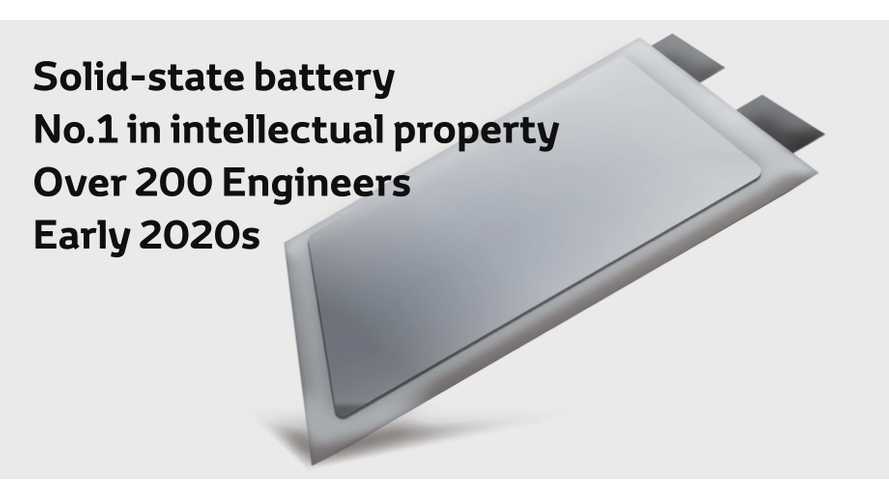 This battery should break through in early 2020's.

If press release prose is to be believed (and probably it isn't), then the solid-state battery is ready to revolutionize transportation. Almost ready, at least. The much ballyhooed tech has yet to be seen in cars. Nor have performance figures from a commercialized product been published. Still, we are encouraged that several companies are industriously working away at it.

Toyota is perhaps at the forefront of that effort — we've been tracking its work in this area for some time, and recently gave you a first look at one of its solid-state battery patents.  It's worth noting that during the company's presentation by Executive Vice President Didier Leroy at the Tokyo Motor Show, he highlighted the technology while discussing the brand's electrification efforts. After affirming Toyota's belief that "EVs will also be one of the key solutions in the near future," he went on to say to the gathered crowd,

"We believe our solid-state battery technology can be a game changer, with the potential  to drastically improve driving range. We are the leader in the field, in terms of intellectual property, and currently, we have more than 200 engineers working hard to be able to commercialize this technology sometime in the early 2020's"

This target date coincides with recent reports that said we could see the tech by 2022, which is still farther away than we like and prevents us from putting too many eggs in this solid-state basket of hope. With so many engineers involved with the project, and its highlighting of the technology by an upper-level executive, though, it's hard to accuse the company of dragging its heels in this area, while mainly focusing on fuel cell powered EVs. Leroy made it clear that the company is pursuing both technologies. After discussing the solid-state battery effort he went on to say, "That doesn't mean we are moving away from fuel cells."

When it does arrive, reports tell us to expect it to pack double the energy density of today's cells and have the ability to be recharged much more quickly. While this, of course, sounds awesome, we would note that there is a wide range of energy densities among the various lithium-ion batteries available today, and that without knowing which formulation they are benchmarking, double could mean 300 Wh/kg, or a truly revolutionary 600 Wh/kg. If it's 400 Wh/kg, with 10-15 minutes charging for a 60 kWh vehicle, then we would be pretty happy with that.

Keep the conversation going in our new InsideEVs forum. Start a new thread about this article and make your point heard; or just browse what is new and of interest with electric vehicles!