Should the US Postal Service Fleet go Electric? 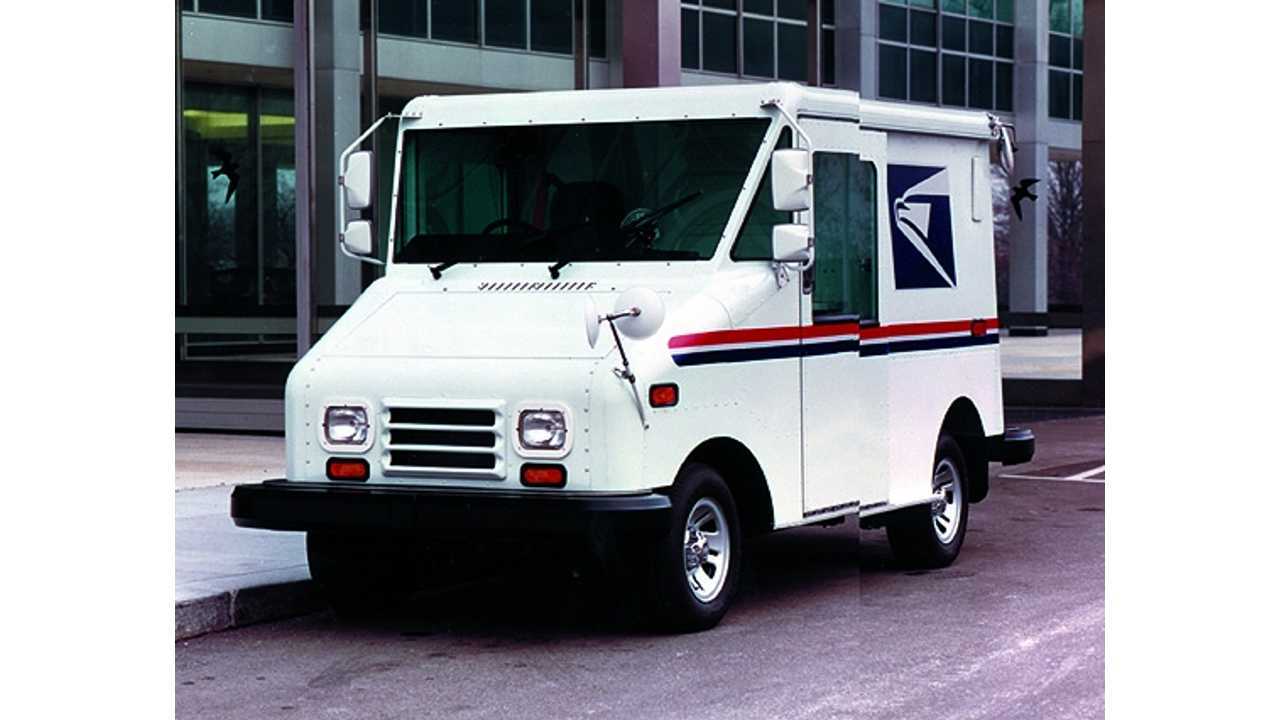 The United States Postal Service has over 140,000 Grumman Long Life Vehicles (LLVs) in their fleet.  These vehicles are intended for urban delivery, and their shells are built to last for many decades.  According to the USPS, as of 2007, the average LLV is roughly 16 years old, on its second engine, and third or fourth transmission.  Because of the nature of their delivery routes and short daily distances, I’ve long been a proponent of converting this large fleet into battery electric vehicles.  But what would it cost?  Would a financial savings be realized?

It turns out that the Postal Service is trying to answer these questions, though not as quickly as one may expect.  In 2000, Ford manufactured 200 electric LLV’s for the post office.  Unfortunately, in 2002, the batteries for these vehicles ceased to be manufactured, and Ford “exchanged” all of the vehicles.  This may sound reminiscent to GM’s forceful take-back of the EV-1 in the same time period.

Fast forward 10 years, and a small experiment has again begun with electric vehicles.  This time, five awards were given to a handful of companies to look into converting a small number of LLV’s to electric vehicles, and to evaluate their feasibility and cost profile.  This year, USPS Chief Sustainability Officer Thomas Day is quoted as saying that, while fuel costs are much lower, maintenance costs are a different story.  He states that the battery must be replaced after only “a couple of years” and that the replacement cost is $20,000.  Yes, twenty thousand dollars.

Where does this cost come from?  Assuming a realistic battery price of $400 per kWh, a battery to easily meet the needs of the average LLV route of 16 miles per day should only cost around $3,200 .  That seems like a more realistic cost, doesn’t it?

What about battery life?  Chevrolet Volts and Nissan Leafs come with an 8 year warranty.  A123, used in neither of these commercial vehicles, advertises a Nanophosphate battery on their website that is capable of thousands of FULL charge/discharge cycles without those annoying buffers on either extreme of the battery.  This battery chemistry is also reported to handle hot and cold temperatures without the need for advanced (and expensive) thermal management.  They even have sample packs in stock, ready for integration into electric vehicles prototypes, and reportedly cost competitive with today’s batteries.  The down side, however, is that A123’s business model doesn’t currently include electric vehicle conversions; they only want to work with original equipment manufacturers (OEM’s).  Isn’t it surprising that a US company that is low on business (and now financed by a Chinese firm) would turn down the prospect of selling over 100,000 of their battery packs because it doesn’t fit their business model?  I thought so too.

These kinds of business arrangements are likely to leave the conversion companies with second rate battery choices that have a higher overall cost point.  Even so, it's hard to imagine the $20,000 cost that Mr. Day stated as being accurate.  Recently, Bob Lutz was quoted as stating that all of the Volt’s electric components only cost $10,000, which includes the expensive thermal management system that the A123 batteries would not require.

Despite the price being very conservative, let’s use Day's original $20,000 figure as an estimate of what it would cost the USPS to convert a vehicle, and see if there are financial savings to be had.  The USPS reports that the average LLV travels 16 miles per day, and due to their stop-and-go nature, only achieves 10.4 miles per gallon fuel efficiency.  That’s an annual cost of $1800 per year, per vehicle.  Now, if we assume that electricity is used instead, that annual cost component reduces to a mere $123.00 per year, per vehicle, or a 94% cost reduction.  These cost estimates assume the average cost of gasoline and electricity in 2011, $3.52/gallon and $0.10/kWh, respectively.  Additional calculation details are shown in the spreadsheet figure below.

Next, if we take this per-vehicle cost estimate, and multiply by the total number of LLVs in their, a cost savings of $240 million per year.  Lastly, if we assume no inflation (a generous assumption for calculating cost savings) and extend this savings out to 10 years – a conservative estimate of the battery and electric motor lifespan – the projected savings over a gas LLV fleet is just shy of $2.4 billion!

These savings estimates assume a $10,000 cost component for each of the electric motor and battery subsystems ($20,000 total), having a 10 year lifetime, or twice the cost that Bob Lutz estimates the Volt's components cost. Since the LLV’s are slated to be overhauled starting in the 2012-2018 timeframe, this is compared against a total $10,000 cost to replace the vehicle engine and transmission system, multiple times over the same 10 year period.  The $20,000 estimate being used, despite being twice the amount that the Volt's system costs, still results in $2.4 billion in savings.  Since the cost estimate is very high relative to actual costs of other vehicles, the amount the USPS can save by going electric may be much higher than what's projected here.

While the $2.4 billion in savings is a large number, it’s still well shy of the $5 billion loss they experienced in 2011.  However, it is a step in the right direction, for their bottom line, as well as the country’s reliance on foreign oil – their present gasoline usage for these vehicles is on the order of 68 million gallons per year.

So what do you think?  If you feel the numbers hold, contact Congress or the USPS today, point them to this write-up, and tell them to electrify the US postal fleet!

$2.4 Billion in Savings over 10 Years is Nothing to Scoff At