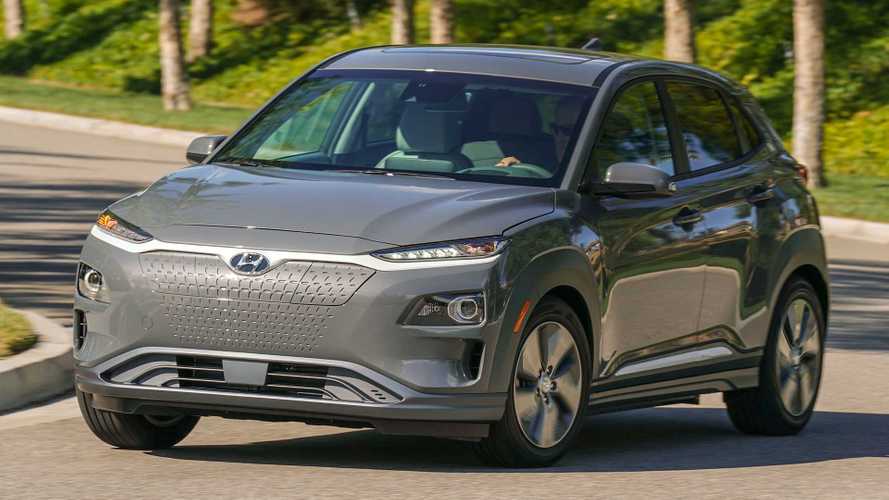 Hyundai shows how to make a 258-mile EV a completely normal experience.

As I settled behind the wheel of the 2019 Hyundai Kona Electric for our first drive of the Hyundai battery-powered crossover last week, my first task was to check the available range. With 13 out of 16 bars lit up on the dashboard, the vehicle’s computer estimated 220 miles available for our half-day trip on the outskirts of Los Angeles.

Let’s pause to consider that number. It’s more than four times the range needed for the 50-mile first drive through the hills of Topanga Canyon and the streets of Santa Monica and West Hollywood. “The highlight about the Kona Electric is the range,” said Gil Castillo, Hyundai’s senior group manager for alternative vehicle strategy. Castillo was along for the ride with us in L.A. He added, “Because of its range, the average consumer doesn’t have to make compromises.”

More about the Kona Electric

The Kona is not a purpose-built electric car, but rather a conventional vehicle that replaces the messy, inefficient internal combustion bits with an electric powertrain. The benefits of that swap were evident as soon I switched the car from Normal to Sport mode – and punched the accelerator. The wheels chirped, spun for a split second, and the Kona took off in a burst of speed.

Because of its range, the average consumer doesn’t have to make compromises.

There is no lack of power in the Kona EV, which delivers 291 foot-pounds of tire-twisting torque, turning the mild-mannered, conventional Kona crossover into a compact SUV that made the twisty L.A. hills a slalom course. The immediate torque of the electric motor was similarly evident when zooming up the ramp to Highway 101, a burst that felt much quicker than the Kona EV’s official zero-to-60 time of 7.6 seconds.

When asked about the attributes that Hyundai wanted to emphasize with the Kona EV, Mike O’Brien, Hyundai’s vice-president of product planning, was focused less on impressing performance freaks and more about appealing to average commuters. “We wanted to maintain a good interior size with cargo and interior space for the passengers. At the same time, our target was to be in the top class in terms of range at 258 miles,” said O’Brien.

He bragged that the Kona EV beats the Chevy Bolt’s 238-range – and lands between the forthcoming $35,000 220-mile version of the Tesla Model 3 that’s expected next year and the longer-range, more expensive 310-mile Tesla Model 3 that’s on sale now. “We wanted to pick the best balance of range and size and capability,” said a sensible O’Brien. “The Kona Electric will allow people to displace a gasoline vehicle in their household, not make this just an additional vehicle.”

The Kona EV is not flashy but it's practical.

If you’re looking for our first drive to reveal some Tesla-like novelty – perhaps a minimalist dashboard design or over-the-air software magic – you will be disappointed. It’s a Hyundai, folks. The cabin is what you’ll find in a value-oriented, front-wheel-drive small crossover. We don’t yet know the Kona EV’s price, but the gas version of the Kona starts right around $20,000 – so after federal and state incentives, the Kona Electric could dip below $30,000.

The body design – besides using a mesh front fascia (with a spot for the charging port) rather than an open grille – is mostly like its gasoline counterpart. The handling of the car and the feel of the steering wheel were not modified for a connection to the road or to get adrenaline flowing. In other words, the Kona Electric looks and feels like a good, competent, and accessible everyday crossover, which happens to be a long-range battery-powered car. Does that not deserve at least a quiet “Amen?”

The Kona Electric deserves an award for the best-ever EV converted from an internal combustion vehicle.

By the time we reached the Pacific Coast Highway and moved east through Santa Monica, rush hour traffic was starting to build. The Kona will initially sell only in California, where most of its buyers will experience the same mind-numbing congestion that we encountered. The majority of our half-day drive of the 2019 Hyundai Kona Electric last week was spent in stop-and-go traffic.

At first, I wondered why Hyundai decided against an entirely open-road locale for the first Kona EV media event. But as we inched forward for nearly an hour – without any effect on the estimated remaining range – I came to see the choice of L.A. as a gutsy move. While the whole industry is trying to emulate Tesla’s “EVs are cool” message, Hyundai put us in crawling traffic in an economy-oriented SUV to show us just how normal a long-range electric car can be.

If the Kona EV lacks sizzle, let’s not be too quick to criticize. The introduction of Hyundai’s first long-range EV comes after last year’s release of the Ioniq, a dedicated electrified platform that includes a 124-mile all-electric version. The Kona should be viewed as a mid-stream course-correction with two goals: to put a 250-plus mile EV into the market and to shift Hyundai’s electric ambitions into the ultra-popular crossover segment.

Hyundai found room for the EV powertrain in the existing Kona model.

“The Kona Electric is an interim product for Hyundai,” said Sam Abuelsamid, a senior research analyst at Navigant Research. “When they launched the Ioniq program with specs for range, battery size, and weight, you didn't yet have the Tesla Model 3 or the Chevy Bolt. The Ioniq was already locked in so they probably thought, ‘What else can we do to get that next level of range?”

Hyundai’s Castillo shed light on that hypothesis. He told us that Hyundai did a lot of research to determine the amount of range that would get average consumers to consider an EV. “Two-hundred miles is very much the tipping point,” he said. “Consumers look at big intervals, and 200 is a magic number. After 300, it doesn't matter at all. So 250 to 300 miles of range is where everyone is focused.”

In that regard, the Kona EV’s adequate creature comforts, familiar dashboard configurations, and unexceptional external styling matter less than Hyundai using an existing crossover model to push the envelope on range. The Kona Electric deserves an award for the best-ever EV converted from an internal combustion vehicle.

Remember the first generation of conversions, such as the Ford Focus Electric, Fiat 500e, and Smart Electric? They could barely make room for 20 or so kilowatt-hours of batteries before compromising cargo space or other features. Fast forward to today, and Hyundai is now able to install a honking 64-kWh pack without sacrificing any comfort. “If we take the idea that this is an interim product, Hyundai executed it extremely well, especially considering that it’s a conversion from an ICE vehicle,” said Abuelsamid.

Every new EV is not going to be a purpose-built electric nameplate. How else will electric cars reach a critical mass? The fact that Hyundai was able to beat the Bolt, which is a dedicated EV, with 20 more miles of range should be seen as a breakthrough. The Kona also has legitimate crossover dimensions – nearly three more feet of cargo than the Bolt and a couple more inches of rear shoulder space.

Nonetheless, I was disappointed that Hyundai didn’t make it easier for drivers to access one-pedal driving. The Kona EV has four levels of brake regen, each controlled by a pair of steering-wheel paddles and indicated on the dash by tiny arrows. However, unless you set the car to the highest level regen and firmly hold the left paddle as you come to a stop, the Kona EV will continue to creep forward. In our ride, I gave up on squeezing the paddle at every stop and resorted to friction braking.

Meanwhile, Hyundai created an “Economy-Plus” mode that’s activated by holding down the Economy button for a couple of extra seconds. It had little effect on acceleration and braking, but shut off auxiliary functions in the car such as AC and limited the vehicle’s top speed. I’m guessing that a long drive in Economy-Plus would be uncomfortable but could push the Kona Electric’s range close to 300 miles.

I was disappointed that Hyundai didn’t make it easier for drivers to access one-pedal driving.

Hyundai also apparently did not put much effort into sound-dampening. To my ear, the Kona EV’s road noise and motor pitch are a notch or two louder than the Bolt’s. On the other hand, its external sound-maker used to warn pedestrians when creeping through a parking lot sounds more like a heroic theme song than just an electric sound effect. That’s a nice touch.

Another disappointment is that the Kona EV is not a 50-state vehicle. Sales will commence in the fourth quarter of 2018, with initial distribution in California. That will be followed in mid-2019 with distribution to Connecticut, Maine, Maryland, Massachusetts, New Jersey, New York, Oregon, Rhode Island, and Vermont. Price has not yet been announced and volume will be modest. “We’ll start small,” Brian Smith, Hyundai Motor America COO, said earlier this year.

These shortcomings are counterbalanced by the extra consideration that Hyundai put into fast charging. Not only is 75-kW fast charging a standard feature on all trim levels, but the company deployed a robust temperature-management system to allow its frequent use. “There’s a debate about how DC fast charging is not good for a battery,” Jerome Gregeois, Hyundai senior Manager of eco and performance powertrains, told me. “But if you have a good cooling system, then you don’t have an issue. You can use fast charging all the time.” An 80-percent DC fast charge of the Kona EV happens in 54 minutes, which is 25 minutes faster than Hyundai’s tests of Bolt charging. That’s at 72 degrees Fahrenheit. If the mercury dips below zero, the Kona EV takes a full DC quick-charge twice as fast as the Bolt.

Hyundai is working on a new, dedicated, all-electric nameplate

The long-range, value-oriented Hyundai Kona EV reveals that Hyundai is not taking a wait-and-see approach to electrification. In fact, Mike O’Brien confirmed that the automaker has a dedicated, all-electric nameplate in the works. Hyundai announced plans for a new long-range EV last year, but it’s reassuring to hear from its product planner that a new ground-up electric car is in process.

You don’t need a rich imagination to get a picture of Hyundai’s upcoming long-range EV. We drove a version of it: the brand-new Hyundai Nexo fuel-cell vehicle (which is, after all, also an electric car). It’s a refined yet muscular crossover with a floating roof canopy and flush door handles. The exterior visual design is sleek without reeking of aerodynamics. The Nexo is Hyundai’s new platform to explore fuel cells and vehicle automation. From the driver’s seat, we enjoyed the high perch, whisper-quiet interior, and high-tech cockpit.

Imagine taking the Nexo and replacing the fuel-cell electric powertrain with enough batteries for 250 to 300 miles of driving range and a robust quick-charging capability. That EV is only a year or two away. In the meantime, the Kona EV goes on sale before the end of 2018. It might not be a game-changer, but it moves us one step closer to the day when a long-range, comfortable EV is a mundane thing.