The sheriff did not hesitate to turn on the siren.

Here is an unusual drag race between a Tesla Model Y and a Ford Explorer police vehicle, shared by Wheels. The Model Y out accelerated the police right from the start, noting a 1/4 mile time of 12.935 seconds and a trap speed of 111.06 mph.

The sheriff's Ford Explorer tried its best with the siren turned on, but it was able to get only 15.748 seconds and a trap speed of 88.57 mph.

The Tesla Model Y can go 0-60 mph in 4.8 seconds (3.5 seconds in the case of the Performance version), according to the manufacturer.

In the second part of the video, we can see the Ford Explorer versus Chevrolet ZL1 Camaro, which was even quicker - 12.318 seconds and a trap speed of 118.12 mph.

We guess that police would gladly switch to some electric cars. Some manufacturers, including Ford, are already working on police EVs. We already saw Ford Mustang Mach-E police cars as well as multiple Tesla cars adapted for the job.

As long as the range will be long enough for the duty, police should have no issues with EVs, especially since they will deliver smooth and silent drive, quick acceleration and potentially much better options of power export for all the additional appliances, compared to running an engine all the time.

Unfortunately, for the police units that would like to switch to EVs, but to a vehicle like the Ford Explorer, the all-electric Ford Explorer probably will not be introduced in the next couple of years, as the company is focusing on its three initial products - Mach-E, Ford E-Transit and Ford F-150 Lightning. 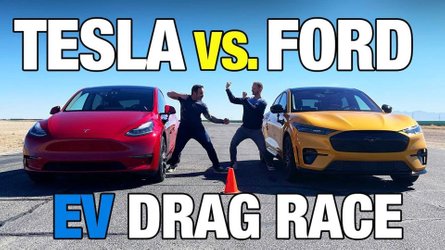 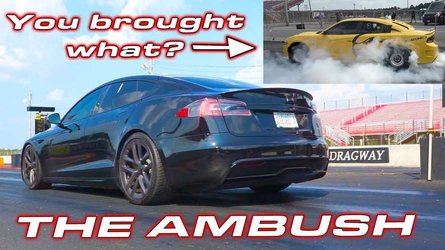