Everything We Know About The Upcoming Rivian IPO

Let's take a look at Rivian, just ahead of its IPO.

Rivian has recently filed for an initial public offering (IPO), which according to media reports, could result in valuation of up to $80 billion.

If the company would manage to find investors for 10% of the shares, it could get up to $8 billion to finance its further growth. That would come on top of the $10.5 billion in venture capital funding as of mid-2021 (including the $2.5 billion round in July).

Let's take a look at some details revealed in Rivian's S-1 filing.

Rivian was founded in 2009, which means that the company has already been around for 12 years. Initially, Rivian was working on an electric sports car, before switching to electric pickups, SUVs and commercial vehicles.

The first models are just entering the market, so there are really no revenues, while there are already quite substantial costs and net losses reported in the filing.

The cash and cash equivalent stands at about $3.7 billion, which combined with an IPO and strong investors, including Amazon and Ford, means that there is no worry about the launch of the first vehicles on the market. The long-term profitability and financial success is - as always - a different story though.

"We do not expect to be profitable for the foreseeable future as we invest in our business, build capacity and ramp up operations, and we cannot assure you that we will ever achieve or be able to maintain profitability in the future. Even if we are able to successfully develop our vehicles and attract customers, there can be no assurance that we will be financially successful." 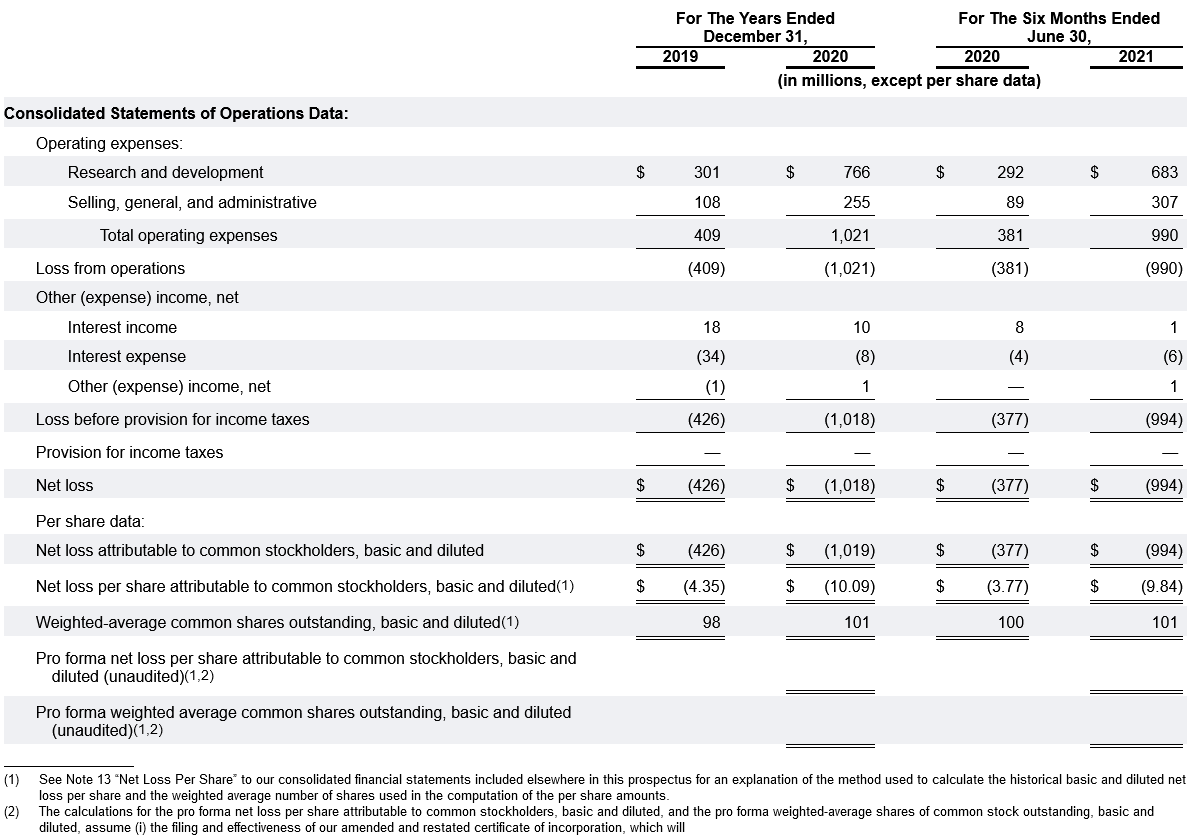 What Rivian has is a manufacturing plant in Normal, Illinois - acquired from Mitsubishi in 2017 - and significantly upgraded to handle volume production of modern electric vehicles as well as battery packs, drive units, vehicle components, majority of stamping and DC fast chargers.

"Our Normal Factory site covers approximately 600 acres in the cities of Normal and Bloomington in Central Illinois. Since purchasing the Normal Factory in 2017, we have invested substantially to overhaul every aspect of the site, including facility expansion, the installation of modern equipment, product tooling, and automation technology, to produce our launch products. The factory building covers approximately 3.3 million square feet and is currently equipped to produce up to 150,000 vehicles annually. We believe that we will be able to increase the annual production capacity of the Normal Factory up to 200,000 vehicles by 2023 as we introduce additional R1 platform variants and expand the facility" 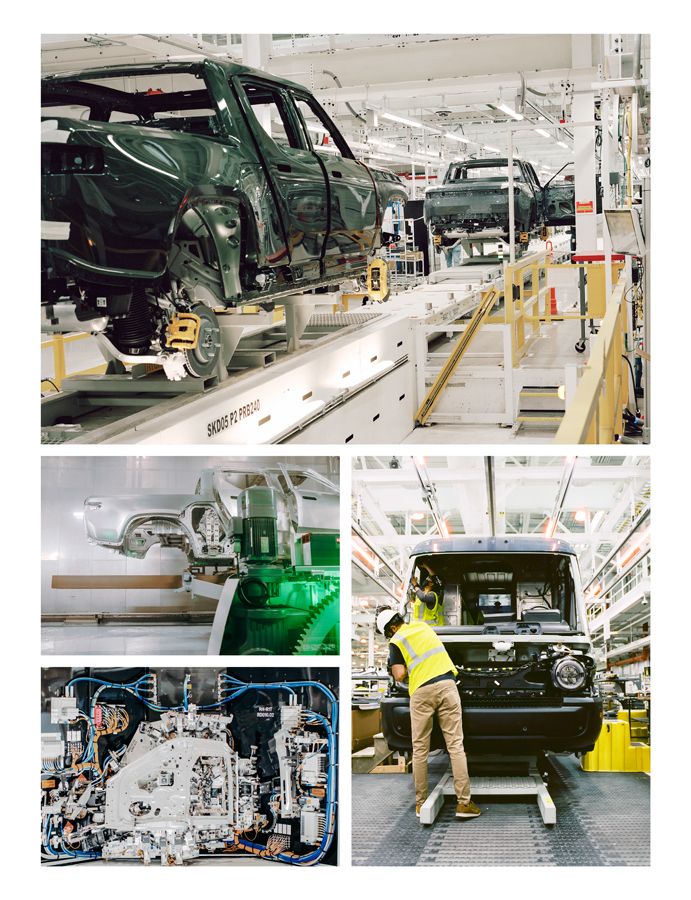 All of the initial launch vehicles will enter production by the end of this year. Then there will be a ramp-up phase and expansion of the plant. Additionally, Rivian would like to build an additional domestic (U.S.) factory over the next couple of years. The plan includes also international plants.

It's expected that the second plant in the U.S. might be located in Texas, and it will produce not only EVs but also battery cells. The in-house battery cell production is one of the goals of a broader vertical integration.

In the coming two years (by the end of 2023), the expected capital expenditures will be approximately $8 billion. If we understand it correctly, then all the proceeds from the IPO will last just for the two years of investments.

"We anticipate our cumulative spending on capital expenditures to be approximately $8 billion through the end of 2023 to support our continued commercialization and growth objectives as we strategically invest in infrastructure, including additional manufacturing capacity, battery cell production, service operations, charging networks, experience spaces, and software development."

Rivian will offer vehicles for the consumer market and commercial market. The first two consumer products are Rivian R1T (a two-row five-passenger pickup truck) and Rivian R1S (a three-row seven-passenger sports utility vehicle), both based on the R1 platform.

The R1T and R1S will serve as Rivian's flagship models. As of September 30, 2021, Rivian had "approximately 48,390 R1T and R1S preorders in the United States and Canada from customers who each paid a cancellable and fully refundable deposit of $1,000."

Those 48,390 preorders won't necessarily translate into 48,390 orders, and on top of that, they might be canceled after delivery, as the company offers a 7-day/1,000 mile return policy:

"If a consumer isn’t satisfied, we offer the assurance of a hassle-free 7-Day, 1,000-Mile Return Policy. Removing barriers to purchase with helpful, proactive, frictionless shopping tools and customer service results in more willingness to try our brand, including our vehicles, accessories, services, and merchandise."

The production and customer deliveries of the R1T started in September 2021 (although at low volume, as far as we know), while the R1S will follow in December 2021, after "the completion of ongoing vehicle validation and all required testing."

In the commercial market, Rivian intends to offer vehicles based on the Rivian Commercial Vehicle (RCV) platform. The first one is the Rivian Electric Delivery Van (EDV), or simply Rivian EDV.

"Our commercial vehicles will initially consist of EDVs, and we plan to deliver 100,000 EDVs to Amazon by 2025."

The main goal for EDV is to achieve lower total cost of ownership and simultaneously offer safe, comfortable and easy to operate vehicles.

The vans for Amazon are expected to be a key revenue stream for Rivian and, according to some reports, the company will focus on the van first, over the R1T/R1S.

"In the near-term, however, we expect that a significant portion of our revenue will be from Amazon Logistics, Inc."

We belive that at a later point Rivian will sell commercial vehicles also for general market, although the EDV’s design and styling is expected to remain exclusive to Amazon. Read more about the Rivian EDV here.

At the launch, Rivian focuses on the U.S. and Canada. Then, in the near-term, the company will expand into Western Europe, which will be followed by "entry into major Asian-Pacific markets."

An important note is that the expansion will be associated with investments in local production:

"To serve our global demand, we plan to localize production and supply chains in these regions."

Rivian plans to launch a network of its own Rivian experience spaces and service centers instead of relying on a dealer network. Not in all states though so laws prohibit this in some states, but the online ordering will be available from any place.

"As we open Rivian experience spaces and service centers, we plan to secure dealer licenses, or an equivalent permit, and engage in activities as a motor vehicle dealer to sell our vehicles directly to customers. Some states, however, do not permit automobile manufacturers to be licensed as dealers or to act in the capacity of a dealer. To sell vehicles to residents of these states, we must conduct the sale out of state over the internet or telephonically. In states where we may not obtain a license to sell directly to customers, we may be able to open flexible galleries that are not full Rivian experience spaces."

"We are planning to open over 120 service centers and to deploy in excess of 1,000 mobile service vans through 2023."

On top of that, Rivian prepares its own Rivian Adventure Network (RAN) DC fast charging network, which is expected to consist over 3,500 DC fast chargers at more than 600 sites in the U.S. and Canada by the end of 2023.

The Rivian Adventure Network initially to be exclusive only to Rivian customers. See more about RAN here.

One of the main directions for Rivian is vertical integration, which is expected to include all important areas, beyond the production of sales of electric vehicles.

We guess that this is the main reason why the initial costs are so high. Rivian simply targets long-term and would like to reach a point when will have a very comprehensive offer. That requires high investments to develop and provide all those in-house solutions. This is actually a similar approach to Tesla.

Rivian will sell and service its cars directly, supplement public charging networks with its own charging network and prepares additional services, including insurance, autonomous driving and other software services.

Only time will tell whether such a vision can come to reality and if Rivian will succeed.

Rivian Estimates Autonomous Option Will Generate $10K Per Vehicle
By: Mark Kane
++
++
Got a tip for us? Email: tips@insideevs.com