The pack doesn't use Tesla's new 4680 cells, but the car welcomes more range and better performance.

According to a recent report published by Electrek, Tesla may have admitted that it reduced the energy capacity of the battery pack in its newly refreshed Model S sedan. Nonetheless, the newest model has more range than the outgoing model.

Electric cars, just like any other emerging technology, improve over time. Hopefully, as time goes forward, automakers will be able to secure cheaper battery cells that are also more efficient and longer-lasting. The more efficient cells will lead to EVs having more range while also being lighter in weight. This type of improvement will also lead to improved performance and cheaper electric cars down the road.

We know that Tesla is using a brand-new powertrain for its refreshed Model S, and CEO Elon Musk showed off the innovative carbon-wrapped motor during the Plaid's launch event. While Musk didn't mention details about the car's battery pack, he made it clear he's enamored by the motor technology. After the event, he also tweeted about it in a reply. Musk said the Plaid motor is "arguably the most advanced motor on Earth." However, he also said Tesla has more tricks up its sleeve for the upcoming next-gen Roadster. 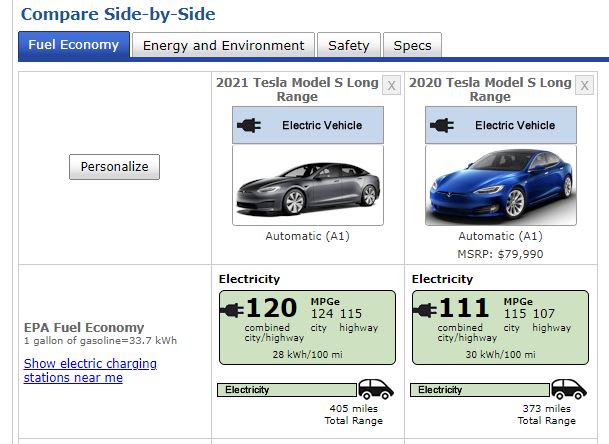 This means Tesla was able to make a more efficient powertrain and a more aerodynamic car in order to achieve greater efficiency, which results in more range from less battery capacity. Electrek says the previous pack was 104 kWh and the new pack is 100 kWh. Electrek also says an independent test by MotorTrend may confirm that Tesla revealed the battery pack size to the publication:

“The battery pack was always the Achilles’ heel of earlier Model S performance variants, so Tesla updated it significantly to take full advantage of the tri-motor system. It’s slightly smaller than before (100 kWh on the Plaid versus about 104 kWh on the Model S Performance this car replaces), but Tesla focused its efforts on improving coolant and electrical current paths.”

Tesla has mentioned that it doesn't plan to use battery packs that have a much greater capacity than 100 kWh, though it will likely have to for its much larger Cybertruck and Semi. We'll have to wait and see what the plan is for the Tesla Roadster. Can Tesla use a 100kWh pack and get the performance specs it advertised?