The Plaid gives the Dodge a head start and brakes halfway through race to avoid getting banned from the track.

Tesla Model S Plaid owner Emmet Peppers recently hit the track with his brand-new car. He posted about the event on Twitter, complete with some commentary and a few videos. As expected, the Model S dominated, even though Peppers isn't a professional driver, and he gave a Dodge Challenger a head start. He also braked during the race for fear he may be kicked off the track.

The race happened at the SMI Sonoma Raceway. Peppers pulled of a 9.71-second quarter-mile run after he started late and braked halfway through. He pulled off an impressive trap speed of 149.12 mph.

As you can see from videos of the event, it's very clear that Peppers was taking it easy with his Model S Plaid in more ways than one. He went so far as to let his challengers have a multi-second head start. Then, after catching up and passing them, he braked hard, sending the car a bit off course. He recovered and still blew away the competition.

The most compelling video was also shared by peppers on Twitter. As you can see, he shared practice runs and explained that he was trying to make sure the Model S Plaid wasn't disqualified for being too fast. He also shared the 9.71-second run from various angles.

People have already talked about the fact that some tracks may not let people race the new Model S Plaid since it doesn't have the appropriate safety features required of a car that accelerates so quickly. Essentially, the National Hot Rod Association (NHRA) has special regulations for 9-second cars and cars with a trap speed of greater than 150 mph.

Perhaps it won't be long before we see Plaid vehicles hitting the track with aftermarket roll cages and parachutes. It seems ridiculous to take it to that level, but if people can't race the Plaid to its fullest capability without being disqualified, they may decide to make the necessary safety modifications. 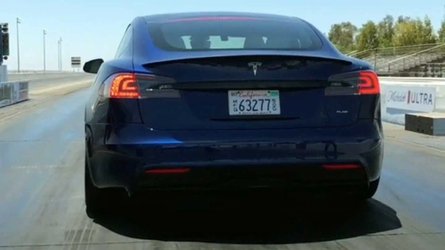 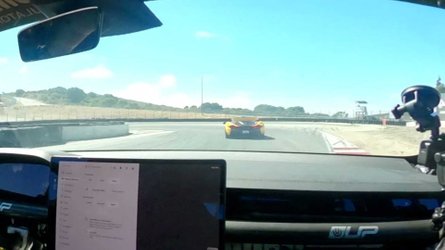 Check out the videos. Then, scroll down to the comment section and let us know your thoughts on this interesting situation.