Let's take a look at few neat charts about the charging infrastructure progress in the U.S.

According to the new National Renewable Energy Laboratory (NREL) report about the EV charging infrastructure in the U.S., the strong growth continued in Q1 2020.

The rate of growth was the highest - above 10% - in Maine, New Hampshire, Vermont, New York, Massachusetts, Rhode Island, and Connecticut. In California, it was 9%.

The expansion of public DC fast chargers is even quicker - by 10.6% to 13,591, although NREL notes that roughly half of those stalls are accessible only to Tesla vehicles (Tesla Supercharging network).

The number of stations is close to 30,000, which means about 3 points per station. 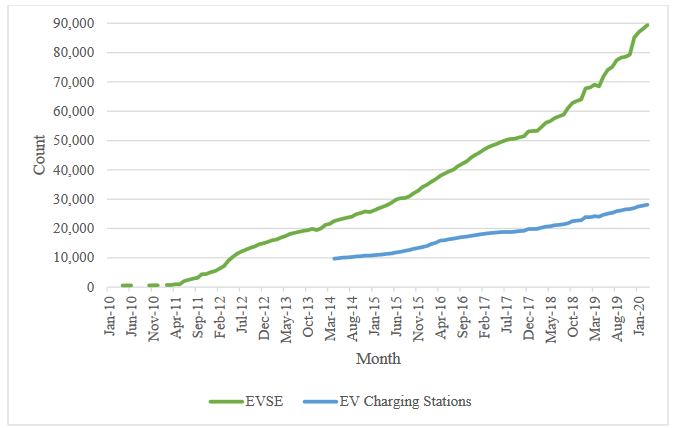 The highest number of charging stations per 100,000 people is in:

Of course, because there are differences in the number of plug-ins per 100,000 people (as well per square mile), it's not possible to judge where it's actually easier to find a charging point.

An interesting thing is the growth of public DC fast chargers, depending on power and plug standard, although the data is not complete (power level is only listed for 37.1% of chargers on the left chart). The number of connectors on the right chart is higher than the number of chargers because some chargers are equipped with both - CCS and CHAdeMO plugs.