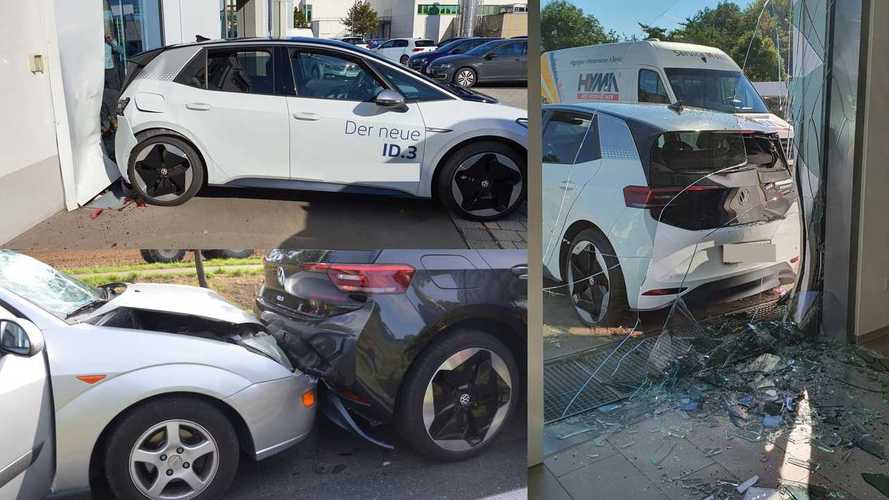 That gives us a twisted glimpse of how popular this EV may become.

Deliveries of the VW ID.3 started on September 11. The first accidents that have been reported took just a few weeks to happen. That was fast, even if not as fast as they happened with the Honda E. While the problems with the small Japanese urban EV always occurred in wet conditions, the ones with the ID.3 were both on test drives. One involved an 89-year-old driver. A 19-year-old man caused the other.

That gives us a glimpse of how wide the ID.3 audience may be, but there’s a catch. While the elderly was trying to drive it, the teenager rear-ended an ID.3 driven by a 53-year-old man.

Both accidents happened in Germany. The first one occurred on September 24 and was precisely the last one we mentioned. The 53-years-old driver is named solely as Norbert by News38.de, and he was evaluating an ID.3 from a dealership.

According to Presseportal, the black ID.3 had to stop because the car in front of it wanted to turn left. That was when the 19-year-old, distracted by his children in the back seat, collided with the electric car.

The picture from the Herford Police Department shows the Volkswagen suffered only minor damages. The Ford Focus was pretty damaged. A 21-year-old woman in the Ford had to be taken to the hospital for treatment. The police estimate the damages at €10,000.

News38.de said Norbert was impressed by how robust the VW was. Despite the unpleasant outcome with his test drive, he said the car was great.

The other accident took place on October 1 in an Erfurt VW dealership. The 89-year-old driver wanted to feel how the new ID.3 was and mixed up the gas pedal for the brakes. The gear selector was on R, which means he backed up at high speed for 20 meters (66 feet) until the car hit the showroom's walls.

Fortunately, no one got badly hurt apart from the driver, who went to the hospital with minor injuries. The same cannot be said about the building, the ID.3 he was driving, and a car inside the showroom. The material damages will cost €60,000 to repair, or twice as much as an ID.3.

In both cases, the accidents were caused by human failure. If we hear about more crashes involving the electric Volkswagen, that will probably be by how popular it is proving to be instead of due to any issues. On the other hand, the Honda E’s problems were due to its tricky behavior at least in Arwin Struwe’s case, as we have already told our readers. We’ll keep an eye in both of them, rest assured. Good luck with ID.3 test drives.