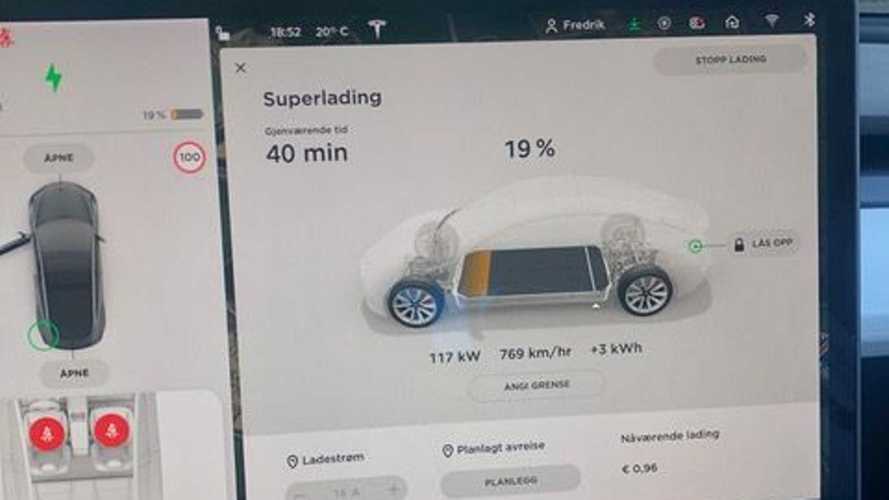 What we really need to understand at this point is why though?

Some think Autopilot is cool. Others love the acceleration, but one of the most convincing selling arguments Tesla has is its supercharging network. People like to know they can charge their EVs fast while they eat something to keep on driving, but what if it takes more doing that then they expected? This is what many readers confirmed and complained about when we reported Tesla is limiting supercharging speeds in Europe.

We received a fantastic amount of messages stating not only that this is a real problem and not limited to a country or two: we also learned that it is happening since last winter, according to Karoliina Salminen, from Finland.

“I have experienced snail speed charging speeds this year. It never reaches more than 118 kW on my Model S 2018. Also ramp-down has been noticeably faster than before. The total charging time is becoming quite long at superchargers. Winter time was about the same speed in total as if I charged with Chademo or 50 kW CCS like K-lataus. Last year, it was enough to stay typically 15 to 20 minutes at a Supercharger station. Now, it is more like 35 to 45 minutes. I think this drop is very noticeable and also is very annoying. I have free supercharging on my Tesla, thought it could be that free charging is slower, but appears it is slow for everyone.”

She also complained about another change Tesla made.

“They reduced the top speed at the very high suspension setting to unusable 20 km/h. I need the very high setting in winter because our countryside roads are really really bad at times. It was explained it was ‘to increase ride comfort.’ Yeah, right... I am not driving in gravel roads for increased comfort anyway. I just need to get home no matter what weather.”

Joost Gremmen, from the Netherlands, experienced that speed reduction in many countries.

Oscar Kuip, also from the Netherlands, said there were no restrictions there, but he did not inform us in which stations he usually charges. He was the only one to say there was no issue with the Supercharging network. Ton Visser, from the same country, said he also had the problem there, validating what Gremmen said.

“Your article confirmed my belief that Tesla is supercharging at a slower rate. At first, I thought that it had to do with the new 3.0 hardware that has been installed in my Model X recently. But now I realize that it affects more people. I have experienced this slower charging rate (very recently) in Superchargers in Belgium, the Netherlands, Germany, Italy, and France.”

“I detected the same situation as other users. The Superchargers do not charge up to 115 kW. I charge usually in Superchargers like Getafe, in Madrid, or La Gineta, near Albacete, or Nueva Condomina Market, in Murcia. I had the same issue with my Tesla and other users say the same thing. I charged in an Iberdrola Estación Premium at 150 kW the past week near Oropesa de Toledo and had no problem with the charging speed. What happened with the Supercharger network?”

That is also what bothers Iñaki Garate, also from Spain.

“A couple of weeks ago, I drove it for holidays from the north end to the south end of Spain and back, totaling some 2,200 km. During this holiday trip, I have been using Tesla Superchargers as much as I could (quite a few of them and in different cities) and I can confirm that none of them give me more juice than 120 kW maximum for a little while, after which it goes decreasing. Temperatures were in the range between 25ºC to 32ºC, with one particular exception ranging to 38ºC. My particular experience for the rest of the year is rather the same thing: I have never seen a Supercharger charge exceeding 120kW with my Model 3.”

Tesla Is Limiting Supercharging To 120 kW In Europe, But Why?

Our last report comes from the country with the highest market share for electric cars, thanks to Fredrik Sletten. He was also kind enough to send us the pictures that are in this article.

“I came home yesterday on a trip from Italy to Norway with my 2019 Model 3 Performance. After hours ripping it on the autobahn, I plugged in at 10 percent, only to get 117 kW max. Initially, I thought it was a bad charger stack, so I switched, to no avail. I continued north and at each station the speed was the same, even experiencing 41 kW in Hohenwarsleben! I switched to Ionity and got 190 kW with no problem. The problem with the Superchargers continued through Germany and into Denmark.”

Although Tesla never answers, we sent the company a message asking for an explanation. Sadly, we suspect it will have the same fate all other requests we made had: absolute silence. If you work at Tesla and can tell us what the reason is, we can protect your identity. If you know by any other means what caused this, please do as these readers: get in touch through contact@insideevs.com or our Facebook page. Let’s see if you can help us clarify the major question that arises from all this: why?