By the way of its Q1 financial report, Tesla boasted that it managed to widen the EPA range gap between its top-of-the-line model and the closest non-Tesla EV.

The gradual improvement of the range was achieved with no increase in battery capacity, which proves that the efficiency of EVs might be significantly improved. Another example of that is the Tesla Model Y with a range similar to the lighter Tesla Model 3.

"The maximum range of both Model S and Model X has been extended further, even without increasing the size of the battery pack. Customers consider long range as one of the most important factors when switching from a combustion engine vehicle to an EV, and our lead has continued to increase, with 391 miles for Model S and 351 miles for Model X.

We recently introduced the new heat pump system, including the octovalvefor Model Y, which allowed us to reach similar EPA range to Model 3 while being ~10% heavier." 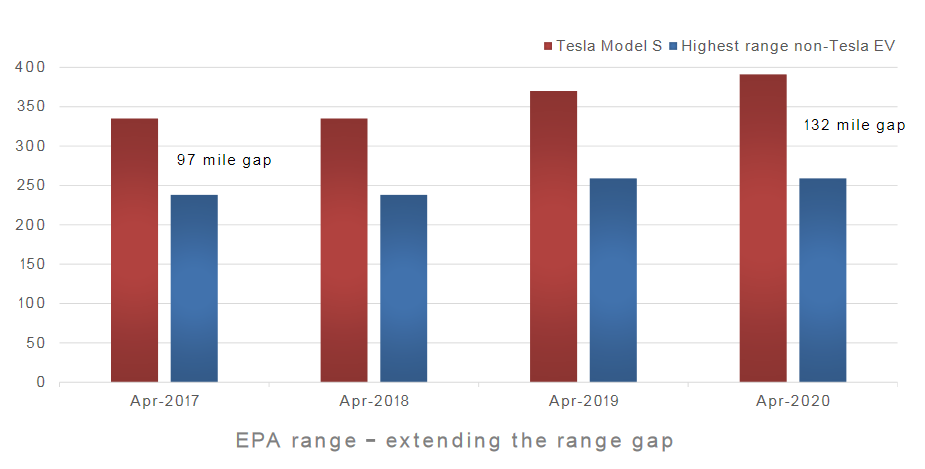 Here Is What A Comparison Of EPA/WLTP Range Ratings Reveal
Here Are The Electric Cars Available In The U.S. Sorted By WLTP Range
Tesla Increases Model S Range To 390 Miles (Model X To 351 Miles)
Tesla Model 3 Range Is Actually Higher Than The EPA Says

While the 391-mile result is an outstanding achievement, the Model S Long Range Plus reportedly is already capable of going 400 miles (644 km) EPA. It was hinted at by Elon Musk in February 2020.

According to Tesla (via Electrek), the EPA "made a mistake" when testing the car as it was left for a while with the key inside, which resulted in a loss of about 2% of battery capacity.

"The CEO claimed that the EPA left the door open and the key inside the car when stopping during range testing – resulting in the car remaining powered up and losing 2% of battery capacity."

We assume that Tesla knows everything about the energy flow during the external EPA test, through its remote monitoring of the car.

Quick calculations reveal that if the car was able to drive 391 miles on 98% of its battery, then another 2% would be good for 399 miles. 400 miles should be then achievable, depending on how much energy was exactly lost.

The EPA results are under fire in recent months, as on one hand, Tesla gets very high results, while on the other hand, at least several other models have received surprisingly low results. The question is how accurate are the EPA results compared to real-world driving?

Here is an interesting thing. The Model S Long Range Plus was rated at 391 miles EPA and 379 miles WLTP, so the ratio of WLTP/EPA is 0.97. It goes below one only in the case of some Tesla cars.