Here Is What A Comparison Of EPA/WLTP Range Ratings Reveal

Porsche and Tesla are on the opposite ends of the spectrum. But why is it so unfavorable for European models?

The U.S. EPA and European WLTP range ratings were introduced to help consumers understand an expected average real-world range, but as more models appeared on the market, there is a lot of confusion instead.

The problem is not only the results themselves (their accuracy), but also the relation between them. We would expect that the ratio between WLTP and EPA would be more or less constant among models, but it's not. It's highly nonlinear.

Most recently we gathered combined EPA range ratings for the all-electric cars available in the U.S. (most of them) and WLTP range ratings for corresponding versions in Europe (the highest combined value, usually with the smallest wheels).

Let's see what we found out from the comparison, and how it might influence one of the hottest discussions now about the Porsche Taycan and Tesla EV range.

First, the dry stats for the WLTP/EPA ratio: 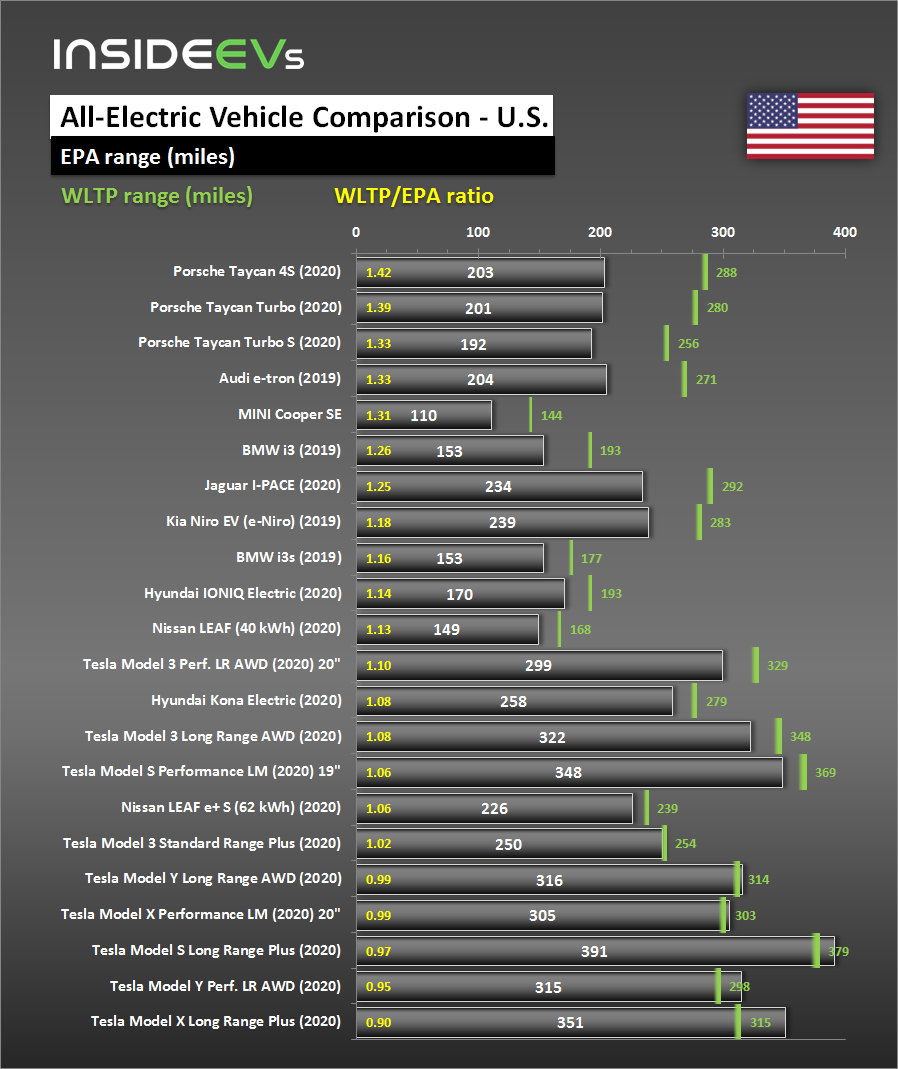 The first finding is like - wow - just look how much the ratio changes across the models. In the upper part of the chart, the difference between the WLTP and EPA is like there is different gravity in Europe. We would be more than happy if the WLTP to EPA ratio would be constant, like 1.1 or 1.2, which would allow us to quickly estimate them, but that's not the case.

On the other hand, not always is the WLTP range higher than EPA. On the bottom, we see some Tesla models, which actually get more EPA miles than WLTP miles.

The third strange finding is that in the upper part we see mostly European models. Why are they rated so low in EPA, compared to their WLTP results?

So what is the real world range?

If EPA range ratings are more and more questionable and the WLTP/EPA is not linear, we will not be able to accurately assess the range ratings.

Maybe the WLTP ratings (despite seeming a little bit too optimistic) are a better tool? We could just take 80-90% of WLTP value as the real-world result.

Or maybe we should simply use an average from EPA and WLTP ratings to get the best estimation? That would be actually an interesting idea, at least to do the match up. Should it be a simple average 1:1 or maybe one of the ratings should have a higher weight?

Our team at InsideEVs recently tested the MINI Cooper SE and got 132 miles (212 km), compared to 110 miles EPA and 144 miles WLTP. The average of 127 miles is actually just 5 miles within our result.

The Porsche Taycan Turbo would be then at 241 miles and Audi e-tron would be at 238 miles!