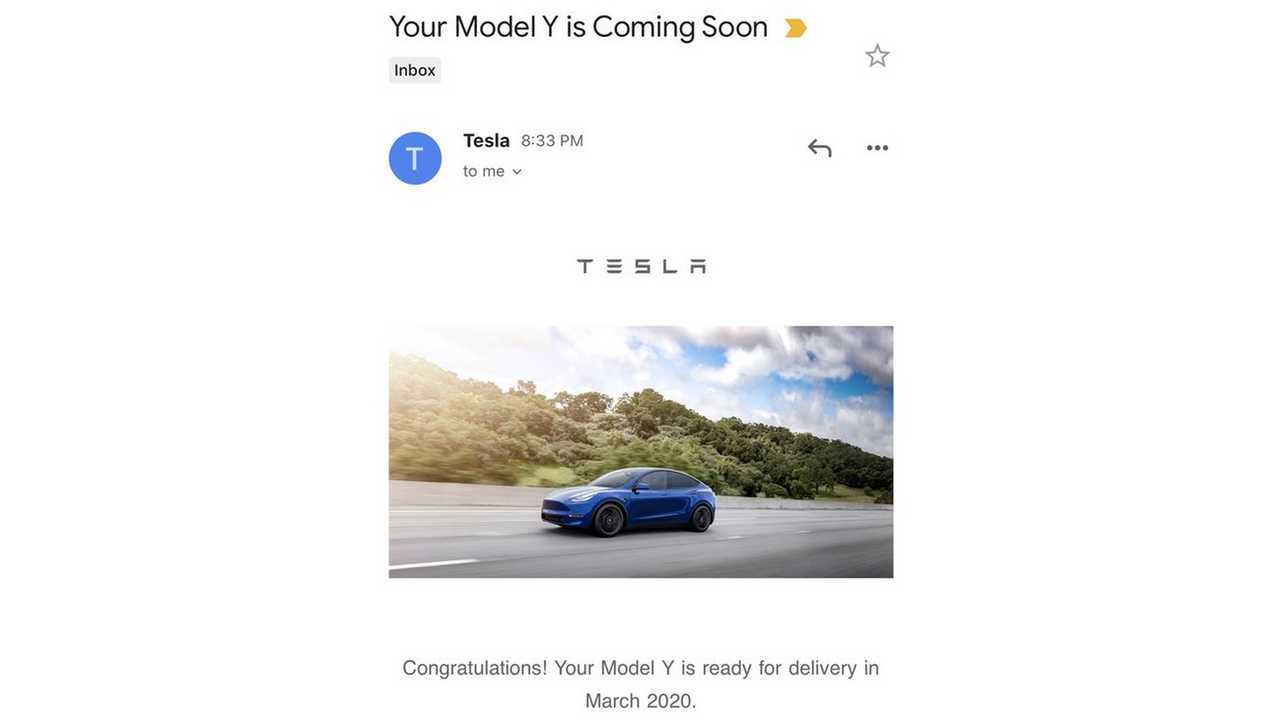 Reservation holders are being told to get ready for their new EVs.

All signs already pointed for that: an official EPA rating, the NHTSA database, videos, SOP – Start Of Production – rumors, and more rumors. Where there's smoke, there's fire. The Model Y would arrive ahead of schedule. Tesla has officially confirmed that by sending its reservation holders a message that it will start deliveries of the first vehicles in March.

Here's Why The Model Y Will Be Cash Cow For Tesla

The standard message is popping up on Twitter like crazy. Many owners are showing screenshots of these Tesla email messages and getting other users anxious to receive theirs as well.

The new electric SUV crossover – or is it a hatchback? – was initially expected for the end of 2020. By anticipating deliveries, Tesla gives a clear message that things are running in a better way than critics would expect. Share prices may reflect that really soon.

The Model Y may have been criticized by its looks, but so has the Tesla Cybertruck and it would allegedly already have 500,000 reservations. Both vehicles are pointed at as true cash cows for the company, but the Model Y will introduce some of the innovations that will make it a true revolution in manufacturing.

The first change will be the use of huge cast parts in the structure. That is expected to save time and effort in the manufacturing process. Elon Musk will probably detail that when the car is officially presented to his fans.

The second one – and probably as relevant as the first – is a massive reduction in wire harnesses. Analysts predict the car will have as low as 100 m of wiring and as much as 700 m. Even the most conservative prediction is half of what a current car needs.

If all this is true, the Model Y will probably cost a lot less to build than current Tesla vehicles. That implies beefier profit margins. The more the company sells it, the better. That leads us to the second favorable point about the new EV.

If the demand for the new Tesla is as high as Elon Musk predicts, it will soon represent more than all of the other three car sales numbers combined.

With cold winter testing, the Model Y will hopefully avoid the paint issues that now plague Model 3 owners not only in cold climate countries but also in California and the UK. Early adopters may experience some problems, but they should now be fully aware of the risks. Tesla should have mitigated them with the learning the Model 3 has probably given it.

We can only wish both the first owners and Tesla the best of luck with what promises to be a groundbreaking car. Its success will be a high impulse in changing the car industry and manufacturing as we know it all the way towards electric mobility.